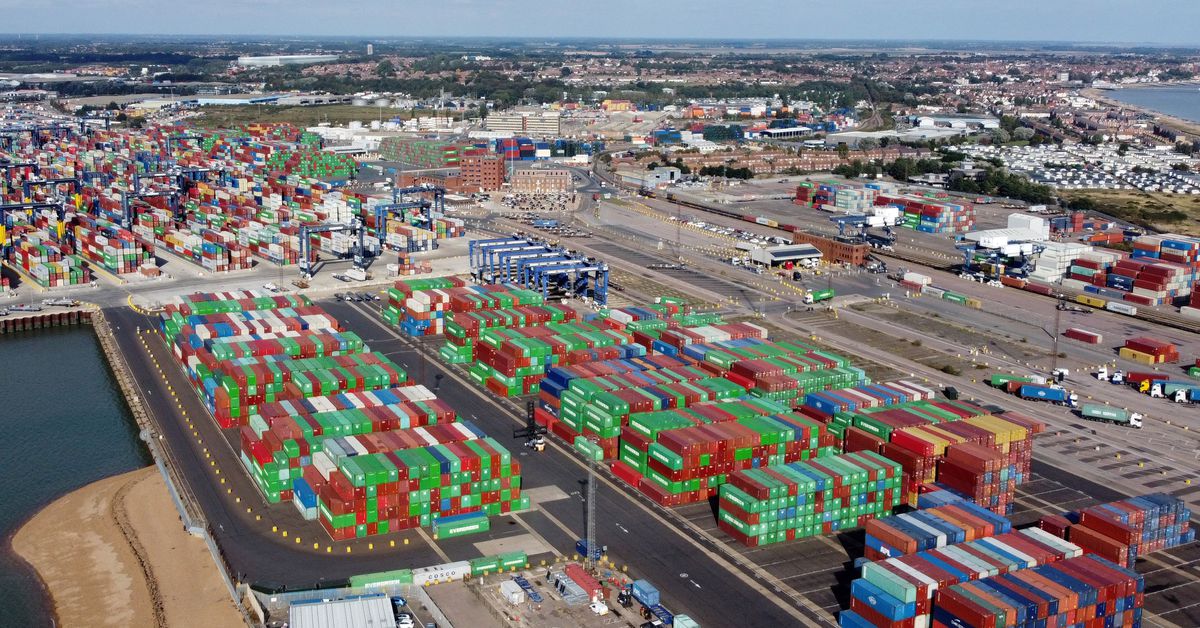 A view shows stacked shipping containers at the port of Felixstowe, Britain, on October 13, 2021. The photo was taken with a drone. REUTERS/Hannah McKay

LONDON, Aug 21 (Reuters) – More than 1,900 workers at Britain’s biggest container port are to start eight days of strike action on Sunday which their union and shipping companies warn could seriously affect trade and supply chains.

Staff at Felixstowe, on England’s east coast, are taking industrial action in a dispute over pay, becoming the latest workers to strike in Britain as unions demand higher pay for members facing a cost-of-living crisis.

“Strike action will cause huge disruption and will generate massive shock waves throughout the UK supply chain, but this dispute is entirely of the company’s own making,” said Bobby Morton, Unite’s national officer for ports.

“It [the company] has had every opportunity to give our members a fair offer, but has chosen not to do so.”

On Friday, Felixstowe’s operator Hutchison Ports said it believed the offer of a 7% pay rise and a lump sum of 500 pounds ($604) was fair. It said the port’s union, which represents around 500 staff in supervisory, engineering and clerical roles, had accepted the deal.

Unite, which mainly represents dock workers, says the proposal is significantly below the current rate of inflation, and followed an increase below inflation last year.

“The Port regrets the impact this action will have on UK supply chains,” a Hutchison Ports spokesperson said.

The port said it would have a contingency plan in place and was working to minimize disruption during the walkouts, which will last until August 29.

Rescue group Maersk ( MAERSKb.CO ), one of the world’s largest container shippers, has warned that the action will have a significant impact, causing operational delays and forcing it to make changes to its vessel fleet.

Figures released on August 17 showed UK consumer price growth reached 10.1% in July, the highest since February 1982, and some economists forecast it will reach 15% in the first three months of next year on rising energy – and food costs. read more

The squeeze on household incomes has already led to strikes by the likes of rail and bus workers demanding higher pay rises.