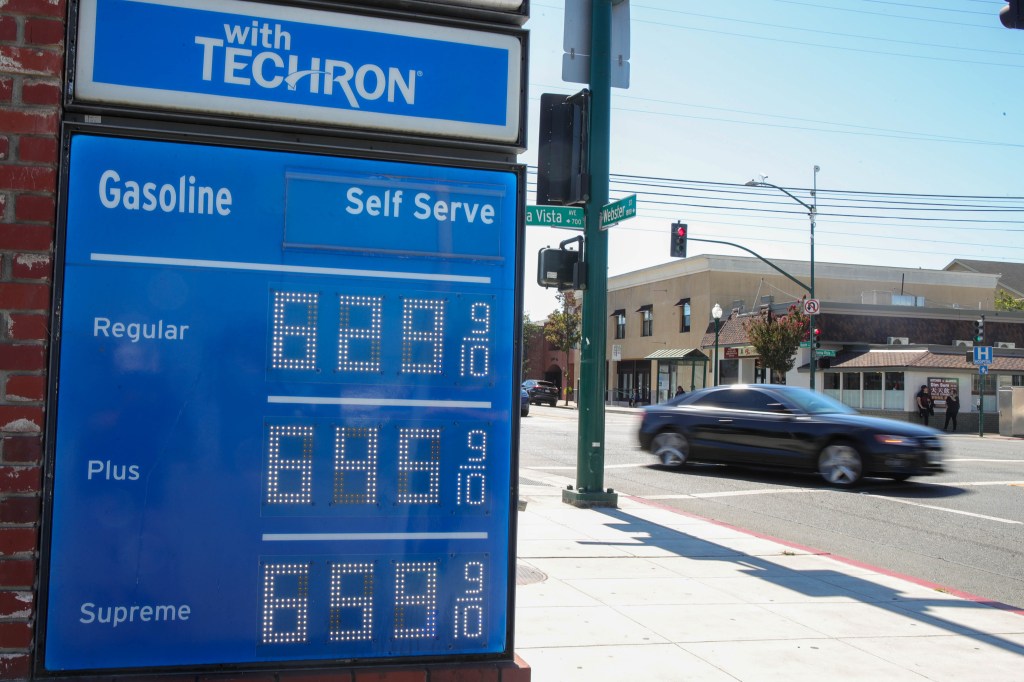 California has long been known as the nation’s most expensive place to fill up your tank, but these days the Golden State is “completely out of business.”

As gas prices have fallen around the country in recent weeks, California prices at the pump have fallen back with a vengeance to an average of $5.58 per gallon.

That’s $1.89 more than the national average — the largest price gap in at least 22 years, according to a Bay Area News Group analysis of AAA data.

While Russia’s invasion of Ukraine led to higher prices around the world, California’s puzzling price swings are largely due to the local oil industry, experts say, putting the state on a different planet when it comes to gas.

“The commodity price of gasoline in California has gone completely out of whack,” said Severin Borenstein, an energy economist at UC Berkeley. “If this holds, we will only start to see the increase. It’s going to go up even more.”

Average prices in the Bay Area are even higher, with San Francisco drivers approaching $6 a gallon and many commuters desperately waiting for gas rebate checks from the state, which are set to hit most bank accounts in October. Although fuel costs are still down from their peak in June, drivers are struggling with nearly seven months of average prices of $5 a gallon.

“It’s unfair,” said Sonya Khvann, a single mother of three, who was pumping gas in Alameda on Friday. She spends about $800 a month on fuel transportation around her children. “It’s not like you can change careers overnight,” said Khvann, a part-time real estate agent. “Not everyone can be in technology.”

Much of California’s high gas costs can be explained. The state’s 54-cent gas tax is among the highest in the nation — only Pennsylvania’s is higher. There are also stricter environmental regulations and special fuel blends that prevent rampant smog from accumulating in cities, combined these factors add about $1.20 to California gas prices.

But the widening gap between what everyone from San Jose to Los Angeles pays compared with the rest of the country is due to the concentrated nature of California’s oil refineries, experts say. Because of the state’s particular gas mix, California is often called a “fuel island” because nearly all of the gas sold in the state is refined locally by a handful of companies, including Chevron, Marathon Petroleum, and PBF Energy. That means mechanical hiccups at refineries can cause large price increases not seen elsewhere in the country.

Tom Kloza, of the Oil Price Information Service, said the reduced flow of gas is likely due to refineries bringing equipment offline for maintenance. He said much of the oil industry postponed regularly scheduled maintenance in the spring so they could continue reaping record profits during the energy price spike following the Russian invasion.

But it’s hard to get to the bottom of exactly why California’s oil refineries have cut output now just as prices are falling elsewhere. No major refinery shutdowns or disasters have been reported in recent months. Instead, experts obtain information from oil production reports. “Because of antitrust regulations, we don’t know how individual refineries operate,” said Kevin Slagle, vice president of the Western States Petroleum Association.

In a statement, the California Energy Commission said state refiners are seeing “temporary” production issues that, combined with maintenance activity and “lower than normal gasoline inventories,” are driving the current price increase over the past four weeks.

The mysterious price hike comes as California Gov. Gavin Newsom has ratcheted up his rhetoric against the oil industry as the Golden State moves to phase out most gas-powered vehicles by 2035 and expand restrictions on drilling. In a statement Friday, Newsom’s office accused fossil fuel companies of “holding families hostage” while touting Sacramento’s plan to send up to $1,050 to California families to ease the financial pain.

“We are phasing out the fear of gas prices and ushering in our oil-free future,” Newsom’s office added.

Borenstein has spent years studying the gap between California’s gas prices and the national average. He said the undetected difference, which he called a “mysterious surcharge,” took off in 2015 when gas prices spiked in the wake of a Torrance oil refinery explosion. Before the explosion, the unexplained price gap was around 2 cents, but afterwards it increased to over 40 cents and has remained high ever since.

Kloza, Borenstein and David Hackett, an energy expert at Stillwater Associates, said there is no evidence of racketeering among the state’s oil refiners. However, an investigation into gas pricing and oil industry practices is ongoing in the State Assembly. Sacramento has a long history of accusing the industry of price-fixing and announcing investigations that yield few results.

Still, it’s widely accepted that September has been a bonanza month for California’s oil refiners. “If you’re a (refiner) on the Gulf Coast, your gross profit on gasoline is about $6.60 (per barrel of oil). If you’re in Los Angeles, it’s about $101,” Kloza said. “The difference is incredible.”