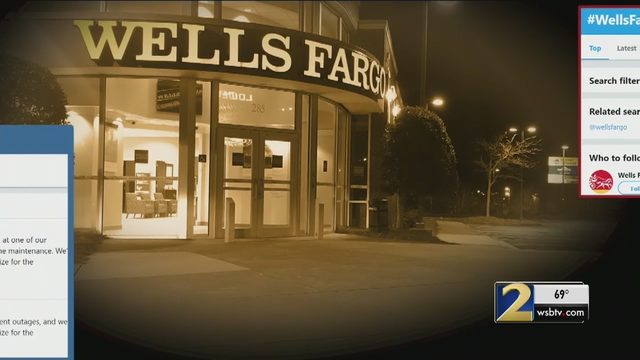 1; Channel 2 Action News is hearing from local Wells Fargo customers who are concerned and upset about the company widespread system outage

The company said the power shutdown was not due to any cybersecurity attack, but rather smoke at one of its facilities.

Thousands of customers were left out of their bank accounts.

Debbie Maple said, showing Channel 2's Alyssa Hyman her Wells Fargo banking app. "Earlier, it wasn't even showing me the pretty picture. It was just like nothing. "

At first she thought it was right here. "I didn't realize it was down, down until now," Maple said.

She was able to use the ATM at the Woodstock branch.

"My first indication of trouble was when I went to buy some dog food," Lianne Whang said.

When she couldn't access her online account, Whang went to her bank and tried to get cash.

Wells Fargo tweeted a message saying it was experiencing system issues due to a power shutdown at one of its facilities after smoke was detected .

One customer tweeted: "My money is so secure, not even I can access it."

Systems were still down Thursday evening, but the issue was later resolved. Wells Fargo says it apologizes for the inconvenience and will reverse any fees incurred as a result.