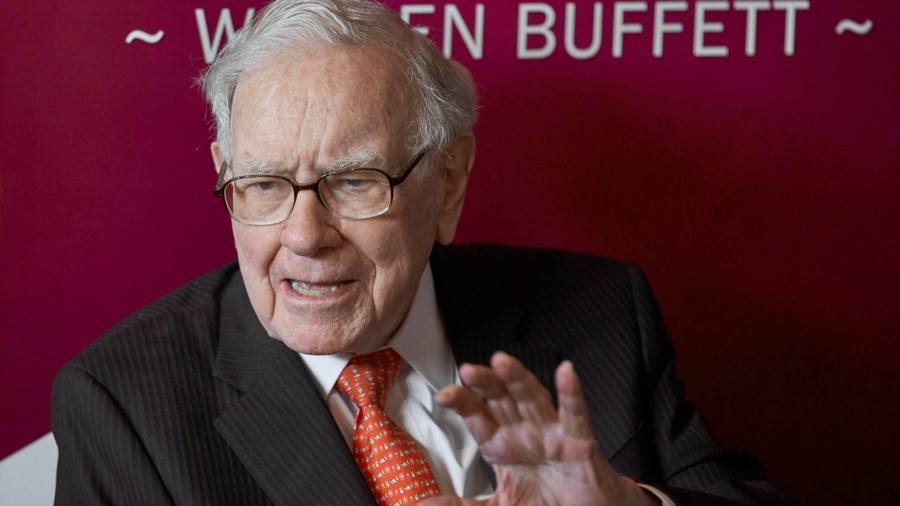 Warren Buffett’s Berkshire Hathaway slowed new investments dramatically in the second quarter after setting a torrid pace at the start of the year, as a selloff in the U.S. stock market pushed the insurance-to-rail conglomerate to a $43.8 billion loss.

Berkshire said on Saturday that the fall in global financial markets had weighed heavily on its stock portfolio, which fell in value to $328 billion from $391 billion at the end of March. The reported loss of $53 billion in the three months to June far outweighed a positive quarter for the businesses, which improved their profitability.

The company̵[ads1]7;s filing with U.S. securities regulators showed that purchases of new stock fell to about $6.2 billion in the quarter, down from the $51.1 billion it spent between January and March — a spurt that surprised Berkshire shareholders. Berkshire sold $2.3 billion worth of stock during the most recent three-month period.

Berkshire also spent $1 billion buying back its own stock in June, a common tactic when Buffett and his investment team find fewer attractive targets in the market.

The 91-year-old investor signaled at the company’s annual meeting in Omaha in April that the wave of multibillion-dollar share buybacks was likely to slow as the year went on, saying the atmosphere at company headquarters had become more “relaxed.”

Investors will get a more detailed update on how Berkshire’s stock portfolio has changed later this month, when the company and other big money managers disclose their investments to regulators. Separate registrations show that the company has increased its stake in the energy company Occidental Petroleum in recent months.

While net income fell from a profit of $5.5 billion at the start of the year to a loss of $43.8 billion, operating income — which excludes ups and downs in Berkshire’s stock positions — rose 39 percent to $9.3 billion. That included a foreign exchange gain of $1.1 billion on the non-US dollar debt.

Berkshire is required to include the swings in the value of its stock and derivatives portfolio as part of earnings each quarter, an accounting rule that Buffett has warned could make the company’s earnings numbers look “extremely misleading” and volatile.

The loss amounted to $29,754 per Class A share. That contrasts with the profit of $18,488 per share the company reported a year earlier.

Berkshire’s results are analyzed by analysts and investors for signs of the health of the broader US economy, as its businesses straddle much of the country’s industrial and financial heartland.

Inflationary pressures continued to bite, although many of the divisions were able to pass on higher prices to customers. The BNSF railroad, which Buffett has described as one of the “four giants” of Berkshire, reported a 15 percent increase in revenue as fuel surcharges it charged customers offset a drop in freight volume. Fuel costs for BNSF, which has more than 32,500 miles of rail track in 28 states, rose more than 80 percent year over year.

Insurance unit Geico recorded a pre-tax loss of $487 million in the quarter, up from the previous three months. The division blamed the bigger loss on much higher prices for new cars and auto parts that it has to pay when customers are involved in accidents.

Buffett said in April that the company saw the effects of inflation first-hand, and warned that it “swindles almost everybody”.

Nevertheless, there were signs of strength in the housing market, with new housing sales from Clayton up 9.8 per cent in the first half of the year. Revenue for the division rose 28 percent to $3.4 billion in the second quarter from a year earlier.

“The rise in mortgage rates is likely to slow demand for new construction, which could adversely affect our business,” Berkshire warned. “We also continue to be adversely affected by persistent supply chain disruptions and significant cost increases for many raw materials and other inputs, including energy, shipping and labor.”

Berkshire addressed a potential conflict that was raised at the company’s annual meeting earlier this year. In June, they spent $870 million to buy shares that Berkshire vice chairman Greg Abel, Buffett’s anointed successor, held directly in his energy unit.

Abel joined the company in 2000 when Berkshire bought utility MidAmerican Energy, and had held part of his fortune in that business rather than in shares of the Berkshire parent company.

Shares of Berkshire Hathaway’s Class A shares have fallen about 2 percent this year, outpacing the 13 percent drop in the benchmark S&P 500.