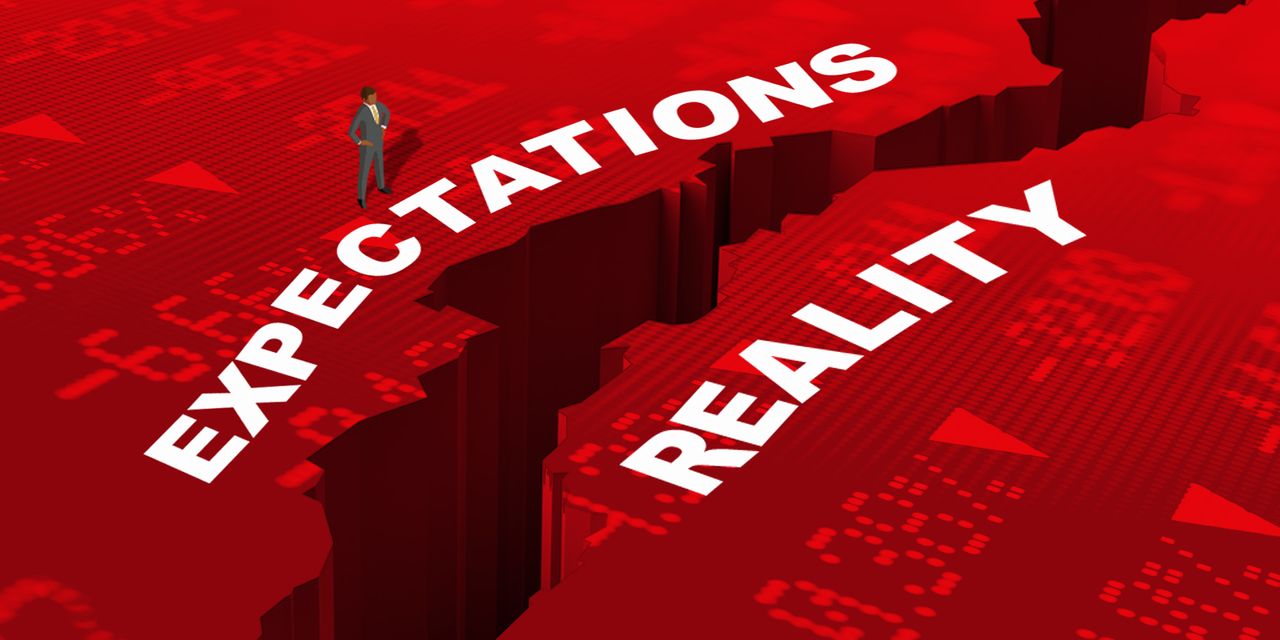 Wall Street is often wrong when it comes to predicting where stocks may trade a year out. But by 2022, forecasters were set to miss the target by the widest margin in nearly 15 years, according to data compiled by FactSet.

Wall Street stock analysts were overestimating the 2022 performance of the S&P 500 by nearly 40% as of Tuesday, according to the average bottom-up forecast compiled by FactSet senior earnings analyst John Butters. That would mark their biggest miss since 2008 when analysts exceeded by 92%.

This year, however, Wall Street’s top strategists have been more cautious, spent much of the time cutting its stock market targets at the end of the year as the Federal Reserve continued to raise interest rates to combat stubbornly high inflation, causing volatility across markets including stocks, bonds, currencies and commodities to explode.

The damage felt across financial markets has sent the S&P 500 down about 20%, on pace for its worst year since 2008, when it plunged nearly 40%, according to Dow Jones Market Data.

A recent survey of top Wall Street forecasts by MarketWatch put the average S&P 500 estimate at 4,031 for the end of 2023, up only about 6% from Tuesday’s close of 3,821.62. To arrive at that average (see chart), MarketWatch compiled estimates from 18 investment banks and brokers.

However, forecasts from the group were spread over an unusually wide range, market strategists told MarketWatch.

On the low end, BNP Paribas’ Greg Boutle expects a continued decline in stocks next year, with the S&P 500 ending 2023 at 3,400. Deutsche Bank’s Binky Chadha, who has the group’s highest year-end target, expects the index to end next year at 4,500.

Furthermore, a FactSet survey of stock analysts gave a bottom-up forecast for the S&P 500 at 4,500 by the end of 2023. That would represent a gain of about 18% based on the index’s closing level on Tuesday.

What about a recession?

Many macro strategists said in their 2023 outlook that they expect the U.S. economy to slide into recession by mid-year, further undermining stock valuations as corporate profits fall and unemployment rises.

Chief economist Jan Hatzius expects economic growth in the US to slow, but avoid a recession.

One of the main pillars supporting equity valuations has been an expectation that stocks will bottom out in the first half of next year, before rebounding in the latter half of 2023, as inflation slows and unemployment rises, allowing the Fed to start cutting interest rates. without risking hyperinflation.

Although even Fed Chairman Jerome Powell has said that there are no guarantees as to where monetary policy will have to bring inflation down concretely, Lingering expectations have been that the Fed will eventually “tilt” away from its aggressive stance on interest rates at some point next year, which has helped support stocks.

Movements in fed-funds futures, which are used by traders for hedging and speculative purposes, appear to confirm that view, according to data from CME Group’s FedWatch tool.

Investors have continued to cling to hopes of a rate cut in late 2023 by the Fed, futures show, although the Fed’s latest “dot plot”, released earlier this month, suggests senior central bankers do not expect to cut rates until 2024.

Many investors expect stocks to bottom out in the first half of 2023 as the Fed’s aggressive rate hikes finally take their toll on the economy.

Marko Kolanovic, who was one of the most bullish strategists on Wall Street heading into 2022, has that view, as he confirmed to MarketWatch via email.

Morgan Stanley’s Michael Wilson, one of the few Wall Street equity strategists who predicted this year’s crash, backed a similar view when he described 2023 as a “tale of two halves” in a research note dated Dec. 19. Wilson believes the S&P 500 will bottom out in the first quarter of 2023, creating a “fantastic buying opportunity.”

A look outside the big investment banks shows bulls and bears with dramatically different visions of how they expect next year to unfold.

Tom Lee, head of research at Fundstrat Global Advisors, sees the S&P 500 rising to 4,750 next year based on his expectation that inflation will continue to ease. Lee has shed his reputation as a bull, standing by his call for stocks to continue climbing in frequent appearances on business television networks, such as CNBC.

In a recent elaboration on the outlook for 2023, Lee noted that instances of US stocks falling for two consecutive years have been rare since World War II.

Also, double-digit pullbacks, which look likely this year, have often been followed by particularly violent returns, as the historical data shows.

The S&P 500 has risen 13.5% on average in the years following a pullback, according to Lee’s analysis of historical data going back to 1946.

On the other hand, stock market bears like Chris Senyek, investment strategist at Wolfe Research, expect the pain in stocks to persist next year. In a recent report, Senyek explained why he believes the US economy will crater next year, while inflation will remain stubborn, leading to “stagflation”.

As a result, Senyek expects the S&P 500 to potentially drop as much as 35% next year. A decline of that magnitude from Tuesday’s close would take the S&P 500 to around 2,500, a level last touched in the wake of the crash in March 2020, according to FactSet.

“We believe that the amount of [monetary] austerity measures that have already taken place are enough to push the US economy into recession, and that US real GDP growth will hit -2% to -3% on a [year-over-year] basis at some point in 2023,” Senyek said in a note.

The S&P 500 has fallen about 20% this year through Tuesday, while the Dow Jones Industrial Average DJIA,

was down 10% and the Nasdaq Composite COMP,