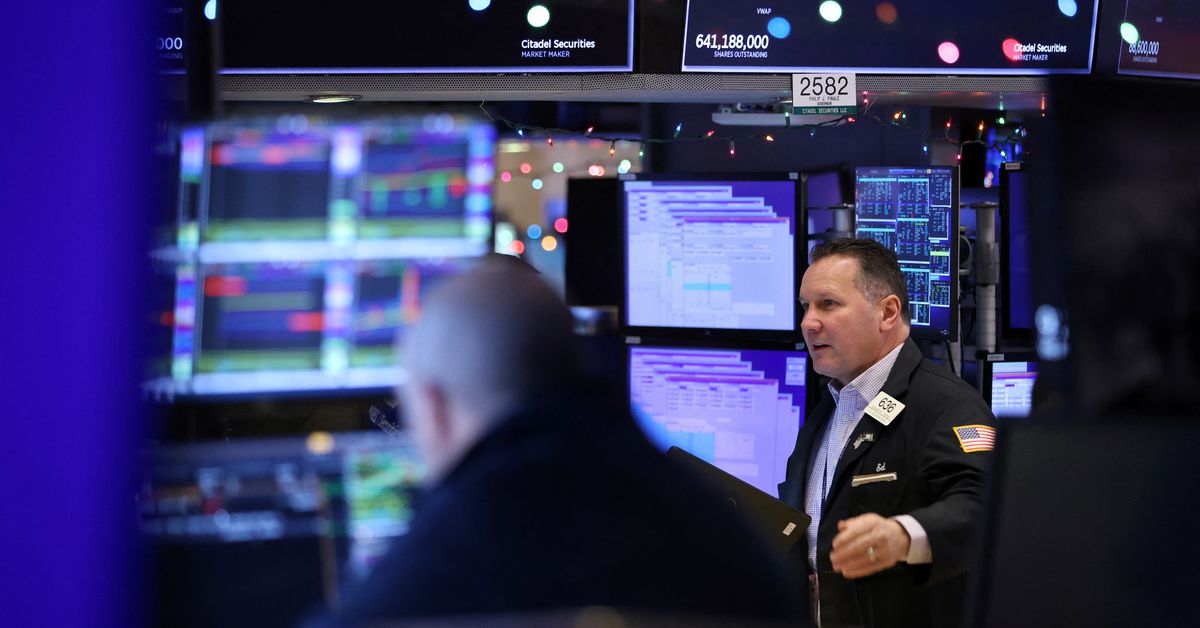 Dec 19 (Reuters) – Wall Street closed lower on Monday for a fourth straight session with the Nasdaq leading decliners as investors shied away from riskier bets, worried the Federal Reserve’s tightening campaign could push the U.S. economy into recession.

The three major US stock indexes have been under pressure since Wednesday, when central bank chairman Jerome Powell took a hawkish tone as the central bank raised interest rates. Powell promised further rate hikes even as data showed signs of a weakening economy.

The S&P 500 (.SPX), Dow Jones industrials (.DJI) and Nasdaq have sold off sharply for December and are on track for their biggest annual declines since the 2008 financial crisis.

As U.S. Treasury yields rose, investors fled stocks and looked to the prospect of safer bets as they worried about the likelihood of a recession in 2023, according to Brian Overby, senior market strategist at Ally.

“Investors are asking why I want to take these risks into 2023 with the Fed’s stance still aggressive when I can get such a good return in the fixed income market,” he said.

The lack of major earnings reports or economic data on Monday likely sharpened investors’ focus on economic fears and interest rates, according to Melissa Brown, Global Head of Applied Research at Qontigo in New York.

“It’s a knife edge between whether we’re going to tip into a recession or have a soft landing. Is the Fed doing the right thing?” said Brown, who also noted that the moves may be exaggerated as many investors take vacations around the end of the year.

The biggest decliners among S&P industrial sectors were communications services (.SPLRCL), which fell 2.2%, consumer discretionary (.SPLRCD), down 1.7% and technology (.SPLRCT), which lost 1.4%. Energy (.SPNY) outperformed, closing up 0.13% as the only industry of 11 to manage a gain.

Market heavyweights such as Apple Inc ( AAPL.O ), Microsoft Corp ( MSFT.O ) and Amazon.com Inc ( AMZN.O ) created some of the biggest drags on the market.

Trading in Tesla Inc ( TSLA.O ) was volatile with the electric car maker closing down 0.24% after falling as much as 2.8% during the session. This was after a Twitter poll showed that a majority of respondents want Tesla CEO Elon Musk to step down as CEO of the social media platform.

Meta Platform’s ( META.O ) shares ended down 4.1% after the European Commission said it could impose a fine of up to 10% of the technology conglomerate’s annual global turnover if evidence shows violations of EU antitrust laws.

Declining issues outnumbered advancing ones on the NYSE by a ratio of 2.80 to 1; on the Nasdaq, a 2.63 to 1 ratio favored decliners.

On US exchanges, 11.07 billion shares changed hands, compared to the average of 11.59 billion over the past 20 trading days.