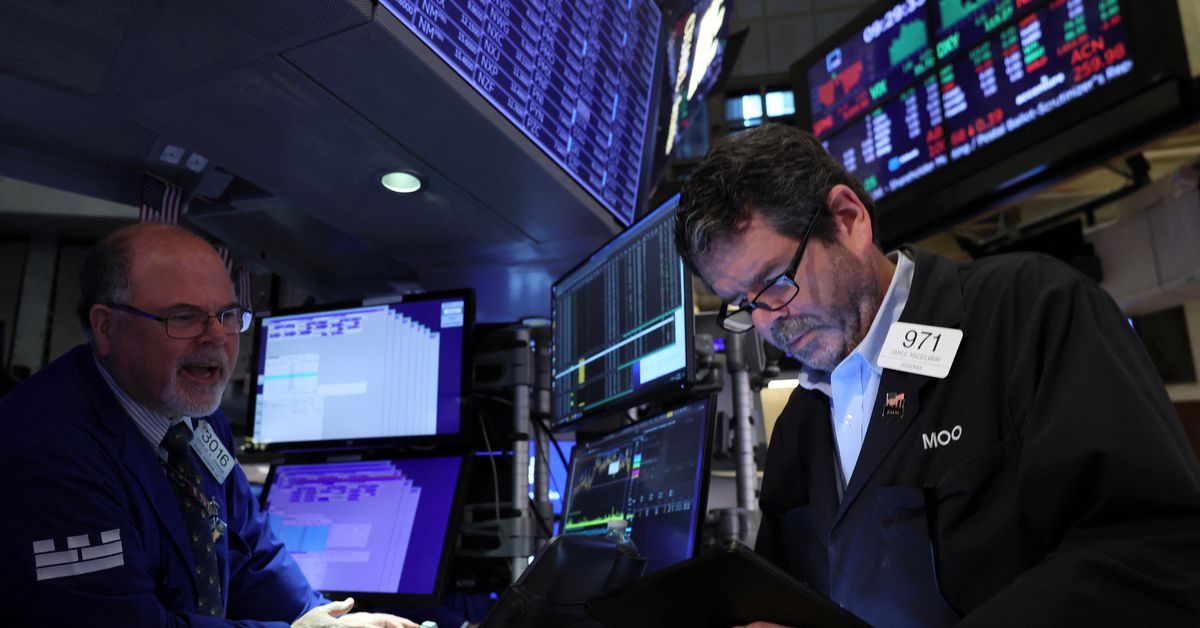 Oct 3 (Reuters) – Wall Street’s three major indexes rose to close over 2% on Monday as U.S. Treasury yields fell on weaker-than-expected manufacturing data, adding to the appeal of stocks at the start of the year’s final quarter.

The US stock market has suffered three consecutive quarterly falls in a turbulent year characterized by interest rate increases to tame historically high inflation, and concern about a slowing economy.

“The U.S. fixed income markets (are) pulling back — that’s been positive … and that means a riskier environment,” said Art Hogan, market strategist at B. Riley Wealth in Boston.

In further support for interest-sensitive growth stocks, the US 10-year Treasury yield fell after British Prime Minister Liz Truss was forced to reverse course on a tax cut for the top rate.

Oil majors Exxon Mobil Corp ( XOM.N ) and Chevron Corp rose more than 5%, following a jump in crude prices as sources said the Organization of the Petroleum Exporting Countries and its allies were considering their biggest output cuts since the start of COVID-19. -19 pandemic.

Megacap growth and technology companies such as Apple Inc ( AAPL.O ) and Microsoft Corp ( MSFT.O ) rose over 3% respectively, while banks <.SPXBK> went up 3%.

The Institute for Supply Management said the manufacturing PMI fell to 50.9 this month, missing estimates but still above 50, indicating growth.

“While good economic data, strong readings had been a catalyst for selling, this is the first time we’ve actually seen some negative news be a catalyst.”

All three major indexes ended a volatile third quarter lower on Friday amid growing fears that the Federal Reserve’s aggressive monetary policy will tip the economy into recession.

Volume on US exchanges was 11.61 billion shares, compared to the 11.54 billion average for the full session over the past 20 trading days.

Major automakers are expected to report modest declines in new car sales in the United States, but analysts and investors worry that a bleak economic picture, not inventory shortages, will lead to weaker auto sales. read more

Citigroup and Credit Suisse became the latest brokerages to cut their end-2022 targets for the S&P 500, as US stock markets bear the heat from aggressive central bank action to curb inflation. read more

Credit Suisse also set a price target for the benchmark at the end of 2023 at 4,050 points, adding that 2023 would be a “year of weak, non-recessionary growth and falling inflation.”

Advancing issues outnumbered decliners on the NYSE by a ratio of 5.04 to 1; on the Nasdaq, a ratio of 2.70 to 1 favored advances.