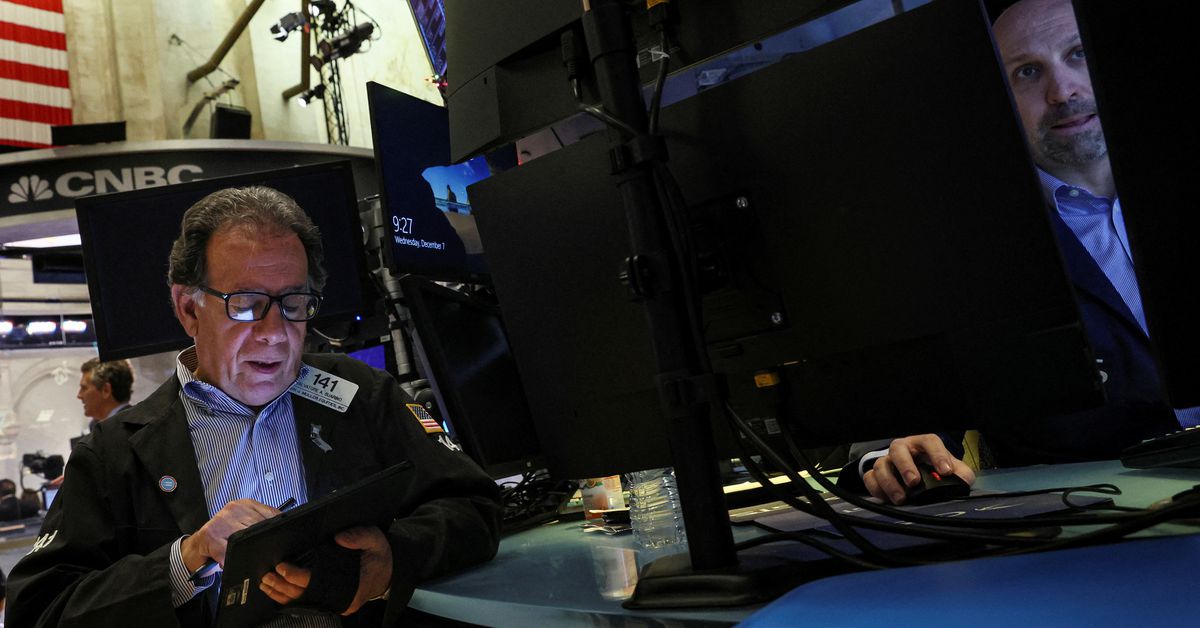 Jan 3 (Reuters) – Wall Street’s main indexes closed lower on the first trading day of 2023 with the biggest drags coming from Tesla and Apple, as investors worried about the Federal Reserve’s rate hike path as they awaited minutes from its December meeting.

Apple Inc ( AAPL.O ) shares fell 3.7%, with the iPhone maker hitting its lowest level since June 2021, after a Nikkei Asia report pointed to weaker demand. In addition, an analyst downgraded his assessment of the share due to production cuts in covid-19 affected China.

The energy sector ( .SPNY ), which posted big gains in 2022, closed down 3.6% on the first trading day of the year as oil prices fell on gloomy business activity data from China and concerns about the global economic outlook. .

The main US stock indexes in 2022 posted their steepest annual losses since 2008 after the Fed’s fastest rate hikes since the 1980s to stem decades of high inflation.

“2022 was a terrible year for equity markets. Some of the reasons for that haven’t gone away because we flipped the calendar,” said Michael James, managing director of equity trading at Wedbush Securities in Los Angeles. “There is still elevated anxiety, uncertainty around the Fed and inflation. Until there is clarity on that, it will be difficult to make any upside in the equity markets.”

Given Apple and Tesla’s influence in the market, James also cited specific concerns about them for broader S&P weakness on Tuesday.

Among the S&P 500’s 11 major sectors, behind energy, technology was the second-biggest decliner, losing 1%, and Apple accelerated the decline as it ended the day with a market value below $2 trillion for the first time since March 2021.

The benchmark index’s biggest gainer on the day was communications services ( .SPLRCL ), with Facebook parent Meta Platforms Inc ( META.O ) leading the advancers there with a gain of 3.7%.

Investors on Wednesday will pay close attention to the minutes from the Fed’s policy meeting in December, when the central bank raised interest rates by 50 basis points after four straight 75 basis point increases and signaled that rates could stay higher for longer.

Other economic data due this week includes the ISM manufacturing report, also on Wednesday, and the December jobs report on Friday.

Weakness in the labor market could give the Fed a reason to ease monetary policy, but the data so far has shown that the market remains tight despite interest rate hikes.

Advances outnumbered decliners on the NYSE by a ratio of 1.42 to 1; on the Nasdaq a 1.20 to 1 ratio favored advancing.

On US exchanges, 10.618 billion shares changed hands, marking an increase from last week’s lower volume due to the holiday season. That compared to the average of 10.799 billion shares for the last 20 trading days.