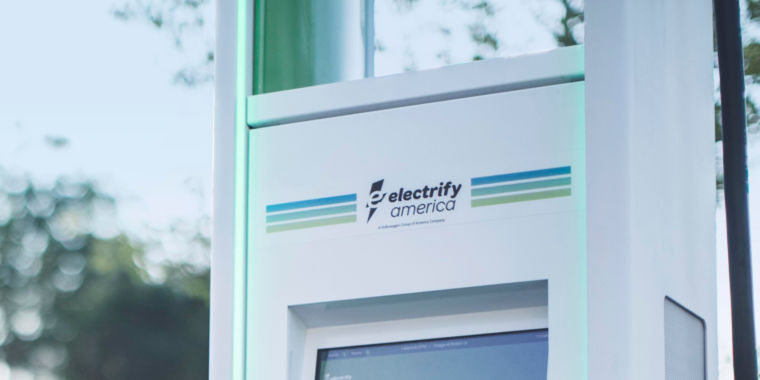 On Monday, Volkswagen subsidiary Electrify America announced a partnership with Tesla to deploy Powerpack batteries (the utility-grade version of the stationary storage, Tesla Powerwall) at 1

00 charging stations throughout the US.

The plan is to use the 210 kilowatt (kW), 350 kilowatt-hour (kWh) batteries as local reserves during periods of high demand, when utilities might charge a company like Electrify America higher rates to provide electricity. On particularly hot days as utilities struggle to meet the needs of air conditioning, for example, higher electricity rates can kick in. That's where reserves of power can help a company like Electrify America shave down the amount of power it's demanding.

The Powerpacks are modular, and a press release from Electrify America says that the company may add more Powerpacks to certain locations over time. Giovanni Palazzo, CEO of Electrify America, said in the same press release: “With our chargers offering high power levels, it makes sense to use batteries at our most high demand stations for peak shaving to operate more efficiently. Tesla's Powerpack system is a natural fit given their global expertise in both battery storage development and EV charging. "Electrify America grew out of Volkswagen Group's 2015 diesel cheating scandal. Volkswagen, Audi, and Porsche diesel vehicles were discovered to contain software that would circumvent the emission control system, allowing the car to spew nitrogen oxides under normal driving conditions. across the US, including 350 kW, cooled-cable chargers, which can charge up to 20 miles per minute.

In a statement to Ars, Electrify America declined to state how much it would pay for the power packs or what the payback period would be for the battery investment.

Tesla also had some battery new s of its own on Monday. The electric vehicle and battery company offer a smaller battery technology company called Maxwell Technologies for $ 218 million or $ 4.75 per share of Maxwell Technologies' common stock. The company said that it expects to close the deal by the second quarter of 2019.

From its website, Maxwell Technologies appears to have experience in Tesla's two dominant battery categories: automotive and utility-grade batteries. The company advertises its "ultracapacitors," which work in tandem with battery cells to provide quick bursts of energy in ways that do not tax the battery's lifetime. "Ultracapacitors complement to primary energy source which cannot provide quick bursts of power, such as an internal combustion engine, fuel cell or battery," Maxwell Technologies writes.

Tesla's utility-grade batteries have found a nice niche in providing frequency response services. That is, a grid must be kept at a specific frequency, and if a generator fails and the frequency dips, a battery can deliver lighting-fast power to the grid to make up for that generator problem. Batteries have been out-performing their turbine-driven competitors in this specific case, because they don't waste time fighting inertia while getting up to the proper spinning speed.