Trump aims for 'radical left' in the July 4th speech 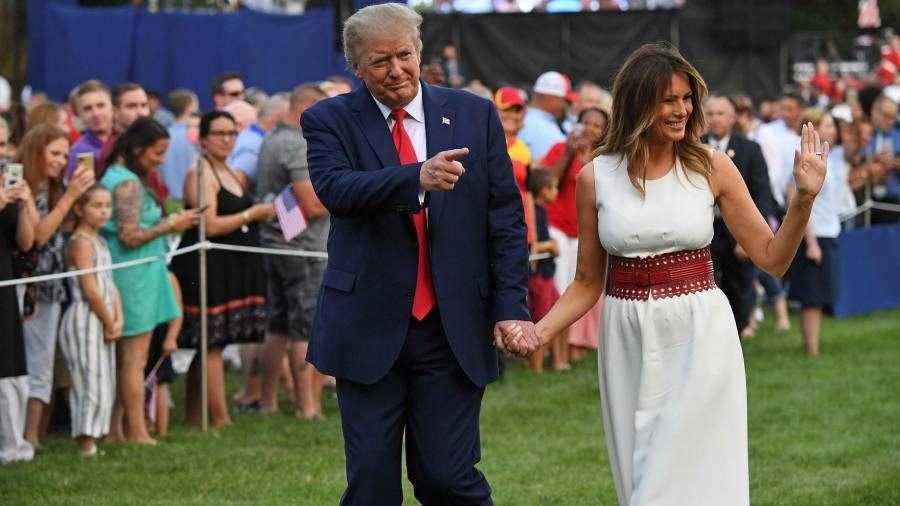 "We are now in the process of defeating the radical left, Marxists, anarchists, agitators, looters and people who in many cases have absolutely no idea what they are doing," said the US President under "Salute to America" ​​- event on the southern lawn of the White House on Saturday night.

The Washington gathering was apparently to mark the July 4 holiday, which is commemorated with the signing of the Declaration of Independence in 1

776. But the president used his speech to emphasize his campaign theme in advance of the November election: that an intolerant form of "left-fascism" sought to silence freedom of speech, indoctrinate Americans, and rewrite history.

The event was held despite objections from public health authorities and Muriel Bowser, the Washington Democratic mayor, DC, who was concerned about the possible spread of coronavirus, most of the attendance at the White House celebration did not appear to be wearing face masks. [19659005] Recommended

Many local authorities canceled July 4 incidents as the coronavirus outbreak has worsened across America's "Sun Belt" – especially in Florida, California, Texas, Arizona and Georgia – forcing many states to reverse efforts to reopen their economies.

On Saturday, Mr Trump again blamed China for the spread of coronavirus, saying that the United States had "made great progress" and "the strategy was moving forward". The president said that the high number of cases was the result of extensive testing. He claimed that 99 percent of coronavirus cases were "completely harmless."

But mainly, Trump used Saturday's event to revive his calls for "law and order" following widespread protests in response to the murder of George Floyd, an African-American man, by a white Minneapolis police officer in May. The president has focused on property damage and the destruction of civil war monuments during some of the protests.

"We will never let an angry bully tear down our statues, erase our history, indoctrinate our children or trample on our freedoms," the president said Saturday.

It was a message Trump delivered in even more stringent terms Friday tonight at an event on Mount Rushmore, South Dakota.

Standing in front of the massive sculpture of US presidents George Washington, Thomas Jefferson, Theodore Roosevelt and Abraham Lincoln, Trump condemned a "merciless campaign to obliterate our history" of what he described as "Leftist fascism."

With four months until Election Day, the events of Independence Day underscore how the president frames a "Cultural War" message about law and order in a reelection campaign caused by the outbreak of Covid-19.

Trump has only recently started organizing personal events and fundraising events, but after a significantly less than expected audience in Tulsa. His campaign has no other events planned in the near future.

The presidential poll has fallen sharply in recent weeks, with many Americans not approving of his handling of both the coronavirus pandemic and widespread civil unrest following Floyd's killing. Most national polls show the president following double-digit Joe Biden, the supposed Democratic nominee.

Mr. Biden, who made no public appearances on Saturday, but released a July 4 video message, leads in all the "battlefield" states that are key in the electoral college to win the White House.

Trump, a frequent critic of the news media, also used Saturday's White House event to launch an attack on the press and accuse reporters of "slander."

"Let me also say a word to those in the media who falsely and consistently label their opponents as racists, who condemn patriotic citizens who offer a clear and truthful defense of American unity: When you equalize these false accusations, you not only despise to me, you not only despise the American people, but you despise generations of heroes who gave life to America. You despise people much braver and more principled than you. "

US coronavirus: January has been the deadliest month for Covid-19, with nearly 80,000 lives lost so far in the US