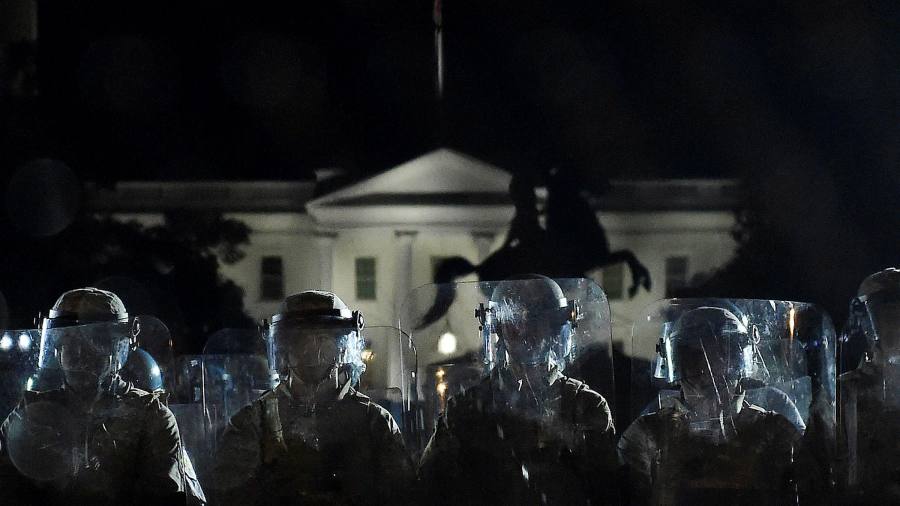 Protesters in American cities defy curfew despite repeated demands by President Donald Trump of a military-led intervention against protests against the murder of George Floyd.

Authorities all over the country, from New York to Atlanta and Los Angeles, had imposed a curfew in an attempt to deal with the most widespread unrest since the civil rights era. Protests against Floyd's death, the last black man killed by police, continued, but clashes with police seemed to wane.

In Washington, protesters gathered near Lafayette Park, a square in front of the White House, which had been fortified with fences to keep protesters farther from the presidential residence

1; an act narrowed by religious leaders and some Republicans.

Elizabeth Warren, a Massachusetts senator and one of several women considered by Joe Biden as a running mate, joined the protesters. "He is inflicting violence on our people," Warren told The Boston Globe.

Thousands of protesters also gathered in front of the US capital, singing "silence is violence," according to Reuters.

In New York, protests continued beyond the cut-off time in Manhattan and Brooklyn. Some protesters were temporarily caught on Manhattan Bridge after police blocked their exit, according to Alexandria Ocasio-Cortez, a New York congresswoman.

Officials in New York had moved the curfew forward by three hours to 8pm and extended it through the week, following allegations of who was blamed for the failure to protect businesses from looting on Monday.

Trump has repeatedly demanded that city and state authorities across the country execute the military to stop the protests, but protesters were still on the streets. He claimed credit for the relatively peaceful protests earlier on Tuesday.

“Active duty elements are located on military bases in the National Capitol Region, but are not in Washington DC. They are with increased alert status, however. . . does not participate in defense support for civilian operations, "the Pentagon said.

Keisha Lance Bottoms, the African-American mayor in Atlanta, told CNN that protesters in the city "largely" respected the curfew, which went into effect at 9 p.m.

Sylvester Turner, the mayor of Houston, the city where Floyd grew up, said 60,000 people marched on Tuesday. "Relatively speaking, our streets are quiet [tonight]," he told CNN.

Trump previously tried to claim credit for relatively quiet evenings in Washington and also Minneapolis, after he threatened to send American soldiers on to the streets.

Although conservatives welcomed Trump's move to signal a tougher approach to the largely peaceful protest, critics accused him of behaving like a dictator and trying to shift attention from Floyd's death.

In a rare statement, former Republican president George W Bush said the United States needed to "listen to the voices of so many who are in pain."

"Those who voted to silence those voices do not understand the significance of America – or how it will be a better place," Bush said in comments that appeared to be an indirect criticism of Trump.

But the president has doubled in his rhetoric.

"NYC, CALL THE NATIONAL GUARD," he wrote on Twitter. "The low lions and losers are ripping you apart. Act fast!"

Americans protesting against racism following Floyd's death were strengthened after Ella Jones was elected as the first African-American mayor in Ferguson, Missouri. The city witnessed protests in 2014 after a white police officer fatally shot Michael Brown, a black teenager.

Meanwhile, Steve King, a Republican legislator who was fired by congressional committees of his own party for repeated racist comments, lost his primary race in his congressional district of Iowa.

Singapore Exchange: Making up for lost cause is challenging (OTCMKTS: SPXCY)

ISS encourages companies to disclose ethnicity among board members