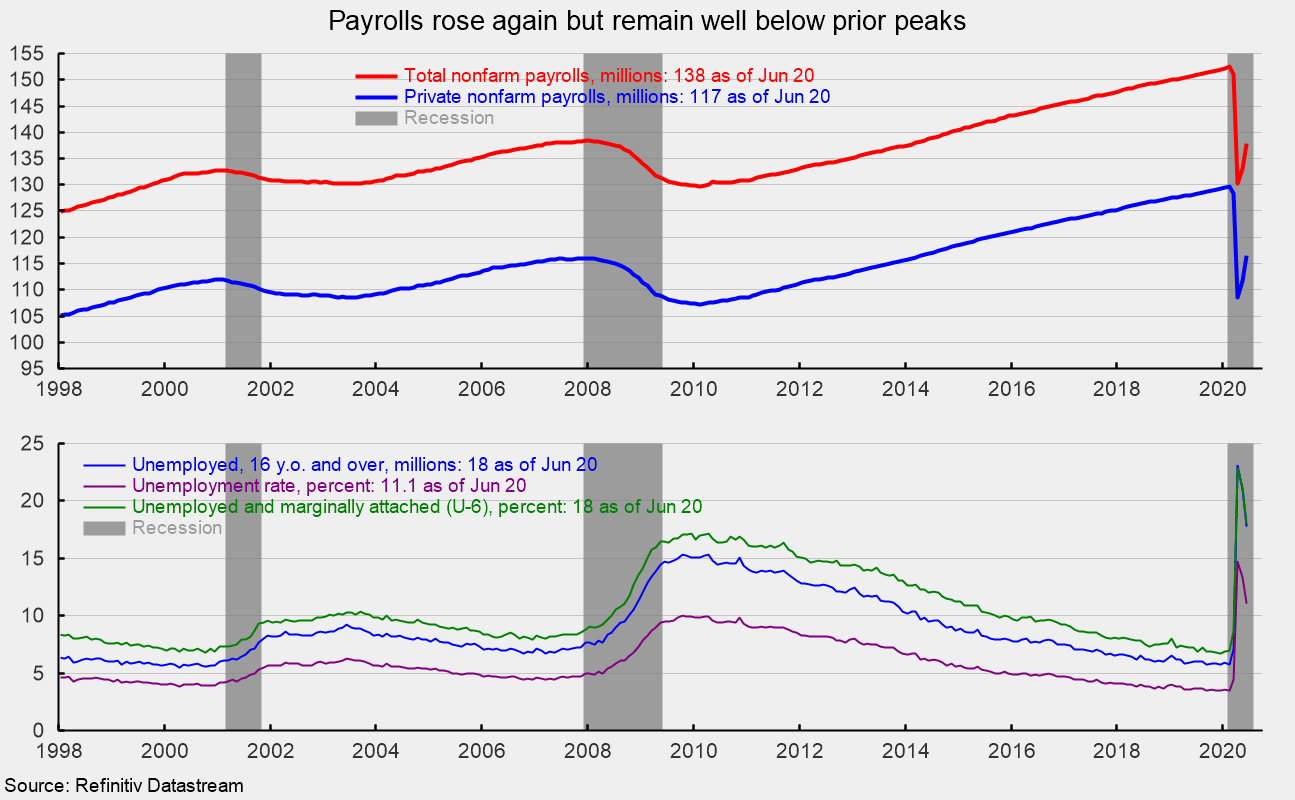 U.S. non-farm wage levels generated a second monthly gain in June, adding 4.8 million jobs after an increase of 2.7 million in May, but remain well below the previous peaks (see top of the first chart). As has been the case in recent months, there were a number of technical issues with the June report, including unusually low response rates and incorrect coding of some classifications (although incorrect coding becomes less significant). The report nevertheless suggests that the labor market is recovering as the restrictive government policy is lifted. However, the uncertainty of consumer reactions and behaviors, as well as continued lifting or possible reintroduction of policy for inconvenience, increases and threatens recovery, with the number of new cases of COVID-1

9 cases growing in many states. unemployed fell to 17.8 million in June, a decrease of 3.2 million from May. The number of officially unemployed in February was only 5.8 million (see bottom of the first chart).

The unemployment rate decreased to 11.1 per cent from 13.3 per cent in May (see bottom of the first diagram) while the participation rate ticked up to 61.5 per cent from 60.8 per cent. Despite the improvement, 11.1 percent is still higher than the next two highest cycle peaks, 10.7 percent peak in November 1982 and 10.0 percent peak in 2009. Although data collection was much less reliable, unemployment after the major The depression was estimated to have peaked at around 25 percent in 1933. The Bureau of Labor Statistics also noted that the technical problems with this report probably underestimated unemployment by about 1 percentage point in June, which means the actual interest rate was closer to 12 percent. The officially reported underemployed and unemployed rate, referred to as the U-6 rate, fell from 21.2 per cent in May to 18.0 in June (see bottom of the first chart).

Overall, private payrolls added 4.7 million jobs in June after a gain of 3.2 million in May (see first diagram). Private services added 4.3 million while commodity-producing industries received 504,000. For private service-producing industries, the gains were led by an increase of 2.1 million in leisure and hospitality, followed by retail sales of 740,000, and health care and social care industries with an increase of 475,000. Within the 504,000 gain in good manufacturing industries, construction added 158,000 jobs, durable goods production increased by 290,000, and non-durable goods production increased by 66,000. The mining and harvesting industry lost 10,000 jobs (see other chart).

Average hourly earnings were down again in June, falling 1.2 percent for the month. The 12-month gain is 5.0 percent; However, these figures are distorted due to the bias of loss of work against lower paid workers. The combination of wages with hourly wages and working hours increased the index for total weekly wages by 2.5 per cent in June after a gain of 3.4 per cent in May. The index is down 4.3 percent from a year ago.

The solid gain in the June job report is further evidence that the economy is already showing signs of improvement. These early signs are supported and encouraged by the easing of restrictions placed on people and businesses around the country. However, as cases of COVID-19 increase in many states, it is possible that consumers may be reluctant to return to the pre-pandemic patronage patterns. Furthermore, it is possible that policy makers decide to reduce the pace of alleviating the restrictions or possibly reintroduce any resolution measures. Either trend is likely to slow the pace of the economic upswing. The focus in the future will be to monitor the development of the pandemic, consumer behavior and policy response. Furthermore, identifying areas of the economy that show signs of improvement versus those that may be burdened with long-term damage or face new or accelerating pressures for structural change will be an important element in understanding economic growth in the medium term.

Editor's Note : The summary bullets for this article were selected by Seeking Alpha editors.