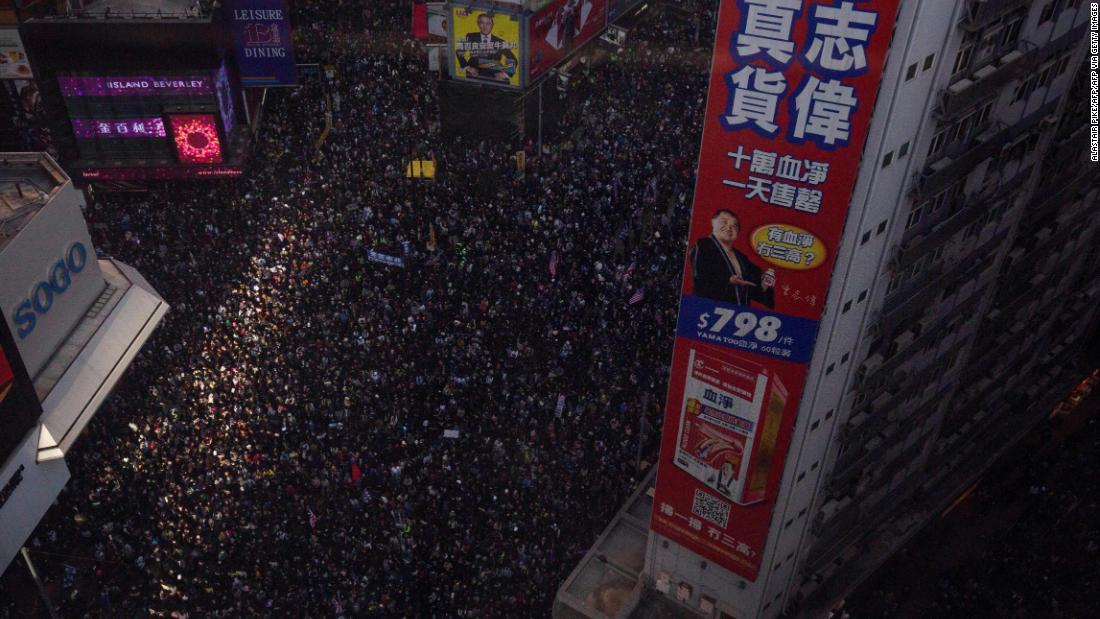 Tens of thousands of protesters of all ages began to gather at Victoria Park in Causeway Bay at 3pm. (02:00 ET) under bright blue sky. Many in the crowd could be seen carrying huge banners with slogans like "Free Hong Kong."

Late in the afternoon, parts of the city had come into complete silence as the crowds tried to move through the main island to Chater Road near the main economic hub.

The event, which appeared to be the largest of its kind in recent months, marks the first time since mid-August that a march organized by the Civil Human Rights Front (CHRF) has received police approval. The group was responsible for two back-to-back, largely peaceful weekend marches in early June, which it estimates will bring together a total of more than 3 million people.

Protests in the semi-autonomous Chinese city were initially triggered by a now-banned extradition law that would have allowed people to be sent across the border to face trial in mainland China, but has since expanded to include calls for greater democracy and government responsibility.

Sunday's march had been seen as a test of the movement's lasting support after six months of occasional violent turmoil – and many of those in attendance expressed frustration over the government and perceived unwillingness to admit.

"We want our demands heard, we want universal suffrage," said a 23-year-old protester, who did not want to be identified. "We want freedom for Hong Kong and for Hong Kong to be managed in a sustainable way," she added.

The organizers had tied up the demonstration to International Human Rights Day, which falls on December 10 and marks the UN's adoption of the Universal Declaration of Human Rights. "Hong Kong's human rights violations and the humanitarian crisis are reaching the tipping point now," the CHRF said in a statement, asking the city government "to uphold its commitment to human rights declaration and all UN human rights treaties pertaining to Hong Kong."
Organizers have promised to keep the protest and had reportedly distributed 200 marshals to deal with any conflicts between the marchers and the police.

Police have allowed the CHRF to hold rallies in recent months but not march, and several unauthorized demonstrations have erupted into violent conflicts between protesters and police.

"This is the last chance given by the people of (CEO) Carrie Lam," CHRF talks Jimmy Sham said Friday, according to AFP.

The group has urged Lamb, the city's leader, to meet the demands of the protest movement, including an independent investigation into allegations of police brutality and restarting political reform to allow full universal suffrage for how the city's leader and legislature are elected.

There has been something of a stay in protests since candidates to democracy achieved a landslide at the municipal council elections last month, but the frustration grows that Lam failed to respond to the results in any meaningful way.
Protesters celebrated the passing of the Hong Kong Human Rights and Democracy Act in the United States, naming what some described as US President Donald Trump's "thank-you gift" to them, but any gift from their own government, or the Beijing authorities, seems imminent.

The high turnout for Sunday's march is likely to repeat the message of support for the protest movement provided by the election results, putting pressure on Lamb to come up with some sort of compromise solution.

In a statement the city government said it "hopes that the public, when expressing their views and opinions, and striving for their own rights and freedoms, can embody fundamental things in the Universal Declaration of Human Rights to respect the rights and liberties of others. violent and illegal acts are contrary to the spirit of the Declaration. "

" From June of this year to now there have been over 900 public demonstrations, processions and gatherings, "the statement added. "Unfortunately, many ended up in violent and illegal confrontations, including reckless roadblocks, gasoline bombs and bricks, arson, vandalism, setting fire to individual stores and facilities on the Mass Transit Railway and Light Rail and hitting people with different views."

The statement said that the government was willing to "engage in dialogues, provided on the legal basis and under a peaceful atmosphere of mutual trust," and added that in the wake of the extradition bill crisis started by the protests, "has learned its lesson and will humbly listen to and accept criticism. "

On Sunday, police said they had seized a "large quantity of weapons, including one firearm and over a hundred bullets," under attack that morning. Eight men and three women were arrested in connection with the operation, they said in a statement.

CNN's Eric Cheung and Rebecca Wright contributed to this report.

Yes, Mr. Peanut Is Dead. But Old-School advertising is even more expensive

What you need to know about Wuhan coronavirus