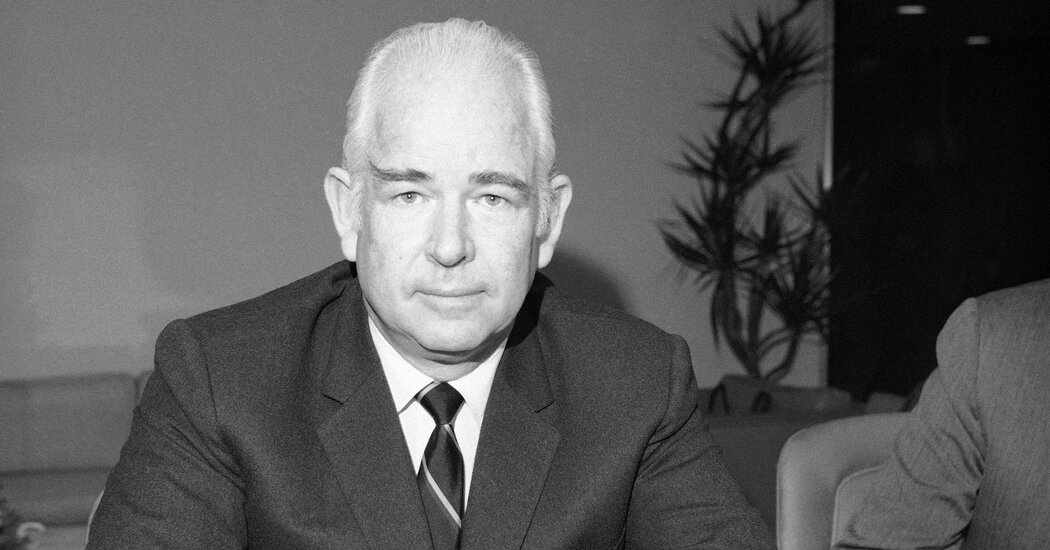 Donald M. Kendall, a former Brussels salesman who, as leader of Pepsi, challenged cola in a worldwide cola war and personally marketed his brand as the first American consumer product produced and marketed in the Soviet Union, died Saturday at his home in Greenwich, Conn. He was 99.

His family announced his death in a statement.

Growing up on a dairy farm in Washington State and never graduating from college, Mr. Kendall spent 44 years with Pepsi, starting as a bottler in New Rochelle, NY, and then a salesman of fountain syrup in Atlantic City. Too early gray since high school, he never discovered that youth was a handicap in rising rapidly through the ranks of society.

He was appointed Vice President of National Sales at the age of 31, starting in 1957, leading the company's international division and doubling the number of countries where the brand was sold when he left that position in 1963 to become Pepsi-Cola's president and CEO. 42. He served as Chairman of the Board for two decades, until 1991, five years after retiring as CEO. at 65.

During his tenure, he launched a daring advertising campaign called the "Pepsi Challenge" – blind taste tests that suggested that Coca-Cola fans actually favored the taste of Pepsi. When Coca-Cola's reformulated "New Coke" was received by consumers in 1985, he took advantage of his rival's disappointment by promoting Pepsi even more. He gambled that consumers would take Diet Pepsi with them while Coke more cautiously marketed its sugar-free formula as Tab. He tried to pursue the "Pepsi generation" by spending a fortune on a Michael Jackson commercial flash. And he bought 7Up, in 1986.

Mr. Kendall expanded Pepsi into food production by merging it with Frito-Lay in 1965 under the name PepsiCo and acquiring fast food chains such as Kentucky Fried Chicken, Pizza Hut and Taco Bell. (PepsiCo later threw away the properties.) During his tenure, the company's annual revenue grew to $ 7.6 billion dollars from $ 200 million.

In a statement, Ramon Laguarta, the current chairman and CEO of Mr. Kendall, called "the architect of the PepsiCo family."

As a politically clear CEO of a global company, Mr. Kendall built a close personal and professional relationship. to Richard M. Nixon, who early represented Pepsi as a lawyer and in 1965 played the piano at Mr. Kendall's second wedding at the Pierre Hotel in Manhattan.

In 1959, Mr. Kendall to open a Pepsi plant in the Soviet Union and saw an opportunity at an exhibition of American products held in Moscow that year (the same exhibition where Vice President Richard M. Nixon conducted his famous "kitchen debate" with Soviet leader Nikita S. Khrushchev

At Kendall's request, Nixon directed Khrushchev to the Pepsi display.

"I went to Nixon the night before, at the embassy, ​​and told him I was in big trouble back home. "Because people thought I was wasting Pepsi's money on coming to a communist country," Mr. Kendall told The New York Times in 1999. "I told him I somehow had to get a Pepsi in Khrushchev's hand. . ”

He succeeded. Mr. Kendall poured Pepsi into a paper cup for the premiere, which immediately declared the drink "very refreshing."

A production agreement was finally signed in 1973 after both parties overcame currency exchange complications: PepsiCo accepted Soviet-produced Stolichnaya vodka as payment instead of rubles.

When the Soviet Union collapsed in the late 1980s, PepsiCo struck another deal: it would open two dozen plants behind the corroding Iron Curtain by agreeing to buy 17 Russian submarines and three surplus warships for scrap.

"We are disarming the Soviet Union faster than you are," Mr. Kendall remarked to Brent Scowcroft, President George HW Bush's national security adviser, according to The Times.

According to government documents and the 2007 book "Legacy of Ashes: The History of the CIA" by Tim Weiner, a former Times reporter, in 1970 Kendall introduced Nixon to a Chilean media mogul and Pepsi bottler who sought Washington's help to ruled by President Salvador Allende, who had been democratically elected in Chile on a Marxist platform. Mr. Allende was deposed in 1973 by the military and replaced by dictator General Augusto Pinochet.

Donald McIntosh Kendall was born on March 16, 1921 at a dairy farm in Sequim (pronounced squim), Wash., To Carroll and Charlotte Kendall.

He enrolled at Western Kentucky State Teachers College (now Western Kentucky University) in Bowling Green on a football scholarship, but left to enlist in the Navy as a World War II bomber. He was shot down near the Philippines, awarded the Distinguished Flying Cross and joined Pepsi-Cola after returning home in 1947.

His first marriage, to Anne McDonell, ended in divorce. In 1965 he married Sigrid Rüdt von Collenberg, known as Bim, a German baroness. In addition to her, he is survived by their two children, Kent and Donald Kendall Jr .; two children from his first marriage, Edward and Donna Kendall; and 10 grandchildren.

During his eventful period with PepsiCo, Mr. Kendall opened China for the company's products, and in 1970 moved its headquarters from New York City to a sprawling campus in the suburb of Purchase, NY, designed by Edward Durell Stein. The hallmark is a public garden with works by renowned sculptors from the 20th century.

Outside the company, Mr. Kendall promoted international trade as chairman of the U.S. Chamber of Commerce and other business groups and as chairman of the American Ballet Theater Foundation, recruited Mikhail Baryshnikov in 1980 to be its artistic director.

Mr. Kendall was an early champion of diversity. In 1962, Pepsi appointed Harvey C. Russell Jr. as the first vice president of a large company in the United States, and led to a boycott of Pepsi products by the Ku Klux Klan. Mr. Kendall countered by appointing another black CEO.

Above all, he was a company patriot. He painted his home mailbox in Pepsi colors, put down a Pepsi for breakfast and, while choking on the word C-o-k-e, he enjoyed the company's rivalry.

"They brought out the best in us," he once said. "If it weren't for Coca-Cola, we would have had to invent one, and they would have invented Pepsi."

Trump's philanthropy: large tax write-offs and demands that do not always materialize