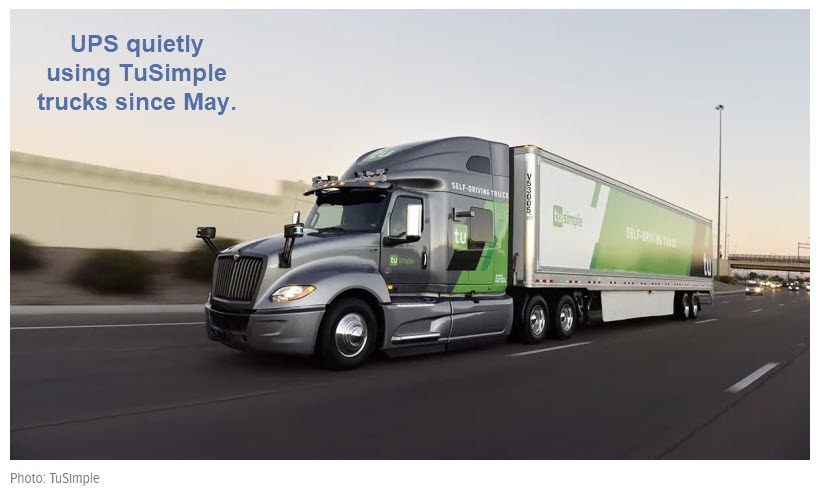 Gizmodo reports that UPS has been delivering cargo in self-driving trucks for several months and no one knew.

UPS announced on Thursday that venture capital has made a minority investment in TuSimple. The announcement also revealed that since May TuSimple autonomous trucks have been pulling UPS loads on a 115-mile route between Phoenix and Tucson.

UPS confirmed to Gizmodo, this is the first time UPS announces that they have used TuSimple autonomous trucks to deliver parcels in the state.

About the same time that the UPS and TuSimple program began, the United States Postal Service and TuSimple published a two-week pilot program to deliver mail between Phoenix and Dallas, a 1

TuSimple claims it can reduce the average shipping cost of a tractor-trailer by 30 percent. In an announcement about the new partnership, UPS Venture's managing partner, Todd Lewis, said the venture arm "collaborates with startups to explore new technologies and tailor them to help meet our specific needs."

TuSimple puts its own autonomous technology – which relies on nine cameras and two LIDAR sensors – into Navistar vehicles.

Zero engagements in a storm.

TuSimple is now connected to both UPS and US Post Office (USPS).

16. February I commented on Self-Driving Truck Startup "TuSimple" Confident of Commercial Driverless by 2021.

The company's cameras can see about 1,000 feet, or 3280 feet ahead, said Chuck Price, TuSimple's chief product manager. " From half a mile away we can spot emergency vehicles, cars destroyed on the side of the road, people walking around ," Price said.

" We are sure we will have our first commercial driverless operation in late 2020 to 2021 Mr. Price said.

Technology Not the Holdup

For now, there are backup drivers. This will change over the next two years.

The main focus is not technology, but federal law.

Commercial driverless will be here by the end of 2021 if federal regulation permits, which I expect.

within a few years of federal approval, the most educated traffic on the highways will be driverless.