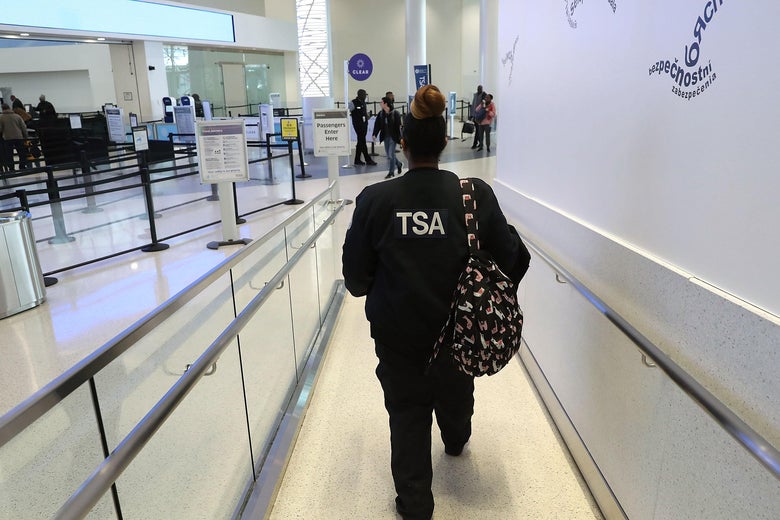 One of the quirks of American politics is that conservatives and libertarians can use common closures as evidence that the federal government was never really needed .

But 420,000 federal workers are still working, without pay, and are suffering from a short-term disaster. For example, the food and drug administration are semi-annual factory inspections on hold. But the Department of Agriculture meat plant supervisors are still working.

In the seizure of workers whose absence would constitute a national crisis, top seeds must surely go to 51,000 employees in the Transport Security Administration. TSA can practice the intrusive security theater, but in the absence of commercial flights in the US, it will lose weight and create global transport chaos.

Like other federal workers, TSA agents missed their first paycheck on Friday. More and more agents call out sick, either in protest or to make up for lost wages.

On Saturday, 5.6 percent of officers were summoned sick up from 3.3 percent a year ago. TSA leader David Pekoske announced $ 500 bonuses. This weekend, airports in Houston and Miami close down terminal checkpoints to better distribute shrinking staffs.

On Monday, 7.1 percent fell from 3.1 percent a year ago, according to the agency. Wait times at the headquarters at Atlantis Hartsfield-Jackson, the nation's busiest airport, were over an hour long Monday morning.

The US federation of government employees, the union representing 44,000 TSA screeners, has sued the federal government on their behalf. The wear and tear caused by the closure, the TSA representative said last week, "will create a major security risk for US travelers." The median TSA screener accounts for $ 40,000, according to the Bureau of Labor Statistics, and the initial salary is $ 15 per hour.

In the New York Times, Barbara Ehrenreich and Gary Stevenson make the case that it is time for TSA workers to strike out. It would be illegal, but the situation they find themselves working without paying for weeks at a time is without precedent.

Other calmer consequences of the closure are no less damaging. But a meltdown at the airports would put a new level of pressure on the Republicans to reopen the government. Fewer than one in four American adults fly more than twice each year, according to Ipsos research. But those who tend to be wealthy and influential, and to close the nation's airports, will make federal workers misery their own.