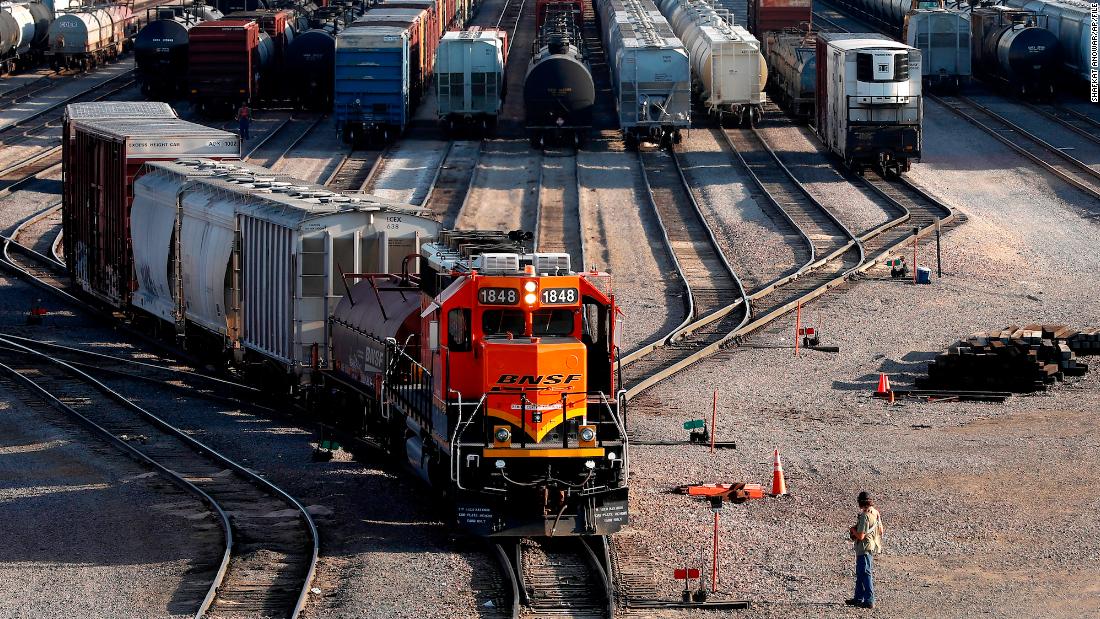 While the sources stressed that the situation remains fluid, the two main unions that have long-running conflicts with the railroads – the Brotherhood of Locomotive Engineers and Trainmen and the SMART Transportation Division – are expected to send their union bosses to the meeting.

“To continue the administration’s ongoing commitment and hands-on efforts to encourage the parties to reach a mutually beneficial agreement, tomorrow morning Secretary Walsh will host the railroad companies and unions in Washington, DC at the Department of Labor,” the spokesperson said in a statement.

Wednesday’s meeting puts Walsh at the center of high-stakes efforts to avert what would be a devastating strike that could deal a major blow to the economy.

CNN reported earlier Tuesday that the White House is urgently discussing contingency plans like the threat of a railroad shutdown, with agencies across the federal government working through how to potentially use federal authority to keep critical supply chains operational while labor talks continue to stall. in a dead end.

Work has picked up in recent days as officials have grown increasingly concerned about a labor strike if freight-rail labor negotiations do not lead to an agreement by Friday’s deadline. And President Joe Biden personally called railroad unions and companies Monday while visiting Boston in an effort to avert a rail shutdown, White House Press Secretary Karine Jean-Pierre told reporters.

While officials have been closely monitoring developments — and have become directly involved in trying to find a solution — for weeks, accelerated efforts to plan for a worst-case scenario underscore the stakes of an outcome that would lead to massive supply chain disruptions and twofold political and economic risk.

“The White House is working with other modes of transportation (including shippers, trucks, air freight) to see how they can step in and keep freight moving, in the event of a rail shutdown,” a White House official told CNN on Tuesday.

The official added that the administration “has also been working with relevant agencies to assess which supply chains and commodities are most likely to face severe disruption, and the emergency authorities available to keep goods moving.”

Around 60,000 union members who work for the railway are to go on strike, including the engineers and conductors who make up the two-man crews on each train. Although 45,000 other union members belong to unions that have tentative agreements with the railroad, a strike by engineers and conductors would bring the freight train system, which carries nearly 30% of the nation’s freight, to a screeching halt.

Stakeholders are already warning that the situation is dire, with the US Chamber of Commerce outlining some of the pressing issues in a letter to congressional leadership on Monday.

“A shutdown of the nation’s rail service would have enormous national consequences,” Executive Vice President and Chief Policy Officer Neil L. Bradley said in the letter.

He continued, “It would cause perishable foods such as dairy, fruits and vegetables to be spoiled at their point of origin, would stop Amtrak service for approximately 12.2 million daily riders in 46 states, would disrupt materials and goods being delivered to factories and ports, and would hamper the transportation of fuel and other essential fuels and chemicals. These are just a few examples of the damage caused by a rail shutdown.”

Biden continues to receive regular updates on the high-stakes negotiations, including briefings on the matter Monday night and Tuesday morning.

Senior-level engagements were expected to continue on Tuesday. There are talks with industry leaders and also “multiple interagency meetings” happening daily with the Departments of Transportation, Defense, Agriculture, Health and Human Services and Energy, as well as the Federal Emergency Management Agency, the official said, with efforts to “identify the sectors and commodities that will be most immediately and significantly affected by a rail stop.”

An important area is hazardous materials transported by rail.

“We are paying particular attention to hazardous materials transported by rail, to protect the safety of workers and communities and to support the continued distribution of vital hazardous materials that rely on rail transport, such as chlorine for water treatment plants,” the official said. who added that “all tools are on the table and will be deployed as needed.”

While concerns about a strike have grown in the White House in recent days, the administration remains hopeful that the matter will be resolved. The president does not have the authority to call off a strike, but Congress can still act to prevent a work stoppage.

“We hope this planning and preparation will prove unnecessary and that the negotiators will agree to a resolution and not allow American workers, families and businesses to be harmed by a rail shutdown. We have been clear in all our communications with the negotiators that a shutdown is unacceptable and will harm American workers, families and businesses, and they must take action to prevent it,” the official said.

This story and headline have been updated with additional details Tuesday.