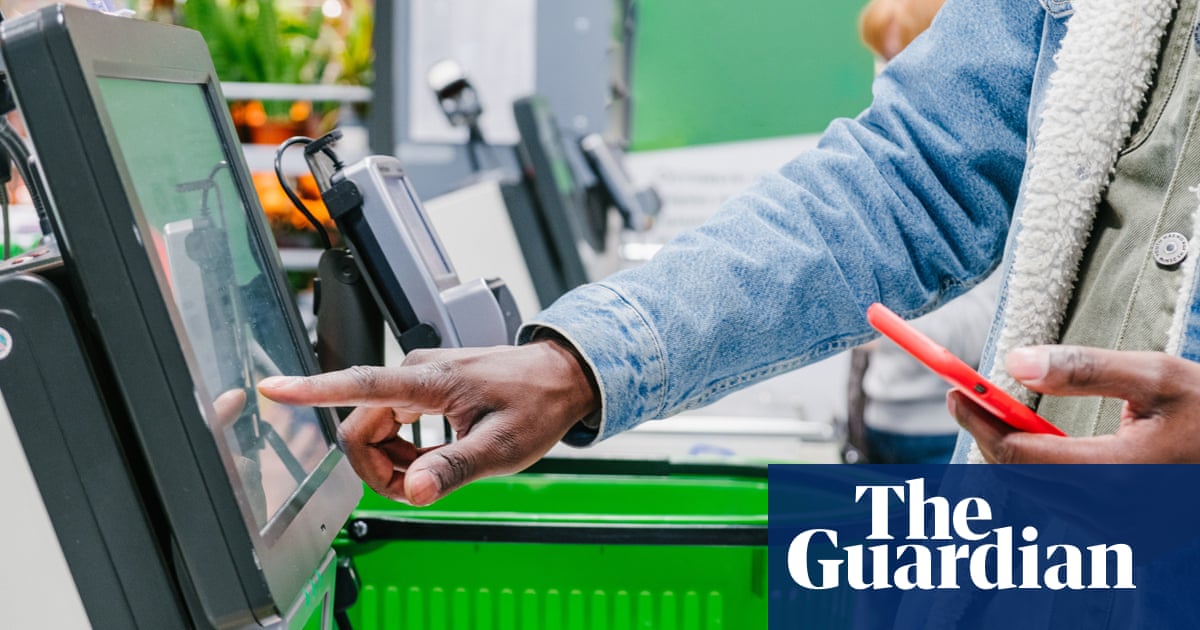 Wwhen the first self-checkout kiosks were rolled out in American stores more than three decades ago, they were touted as technology that could help stores cut costs, save customers time and even prevent theft.

Companies still worry about these issues, and in the face of a tight labor market, more companies are making self-checkout the norm. But the machines failed to live up to their promises. This week, Walmart̵[ads1]7;s CEO said thefts “are higher than they’ve historically been,” which many employees and customers associate with self-checkout. In addition, the machines have made it more difficult for the workers they were supposed to replace.

That includes 25-year-old James, a cashier at a large store in Washington state, where he has worked for four years. He says self-checkout has become one of the most grueling parts of his job, which pays just a little more than minimum wage.

Customers often take out their frustrations on him. “This should be your fucking job, not mine,” he recalls a man recently lashing out at him. “I said, ‘Sir, no one is forcing you to come to self-checkout.’ If you want a cashier you can go to register three.’”

James is required to monitor a continuous stream of up to four customers at once – “like a shark with blood in the water” – as they struggle with the scanner and touch screen, and sometimes try to steal. “You’re confined to that small space and you’re basically standing in one place for up to eight hours a day, which just kills your feet. And having to deal with so many people just drains your mental battery, he says.

In 2018, only 18% of all grocery store transactions went through a self-checkout, rising to 30% last year. Walmart, Kroger, Dollar General and Albertson’s are now among the chain stores testing full self-checkout stores.

It’s not something we should get excited about, says Christopher Andrews, a sociologist who examined the kiosks in his 2018 book, The Overworked Consumer: Self-Checkouts, Supermarkets, and the Do-It-Yourself Economy. Despite what grocery stores and kiosk manufacturers claim, research shows that self-checkout is actually no faster than a regular checkout line, says Andrews. “It just feels like your time is occupied doing tasks, instead of paying attention to every second ticking away.”

Nor have they reduced the need for workers: despite the increase in self-checkout, data from the Bureau of Labor Statistics show that the number of cashiers employed in the United States has remained roughly the same over the past 10 years. And any reduction in low-wage workers has been offset by the need to pay technicians to maintain the kiosks, Andrews says — and the kiosks can cost as much as $150,000 for a single row.

So if self-checkouts are so ineffective, why do we even have them?

The self-service policy of modern supermarkets has largely been “imposed by the companies, not because of customers asking for it”, Andrews says. Before the 20th century, shoppers usually bought goods directly from clerks standing behind counters. That changed in 1916, when Clarence Saunders opened the first modern supermarket: a Piggly Wiggly in Texas where customers were asked to take items off the shelves themselves—and received a discount for doing so.

In 1986, a handful of Kroger stores installed the first self-checkout machines, which cost $5 million to develop. The devices, called CheckRobots, required customers to scan items and place them on a conveyor belt before a human employee packed them at the other end. Donald Dufek, a Kroger vice president, admitted that the system was actually slower than traditional checkouts. But “if the customer feels and believes that this payment method is faster, they are happy to get out of the store faster”, he told reporters at the time.

Andrews says his research has found that the majority of people don’t actually want self-checkout. The real reason stores use them, he says, is because their competitors do. “It doesn’t work well for anyone, but everyone feels they have to have it. The companies think, “If we can just convince more people to do this, maybe we can start reducing some overhead.”

Meanwhile, self-checkouts have become a prime target for fraudsters, who use a variety of tactics to defeat theft protection measures. Weight sensors can be defeated by ringing up expensive items – like king crab legs – as cheap items like apples. James, the Washington cashier, says he saw a customer try to buy a $1,600 grill for $5 by hiding one item inside another and switching barcodes.

It has led to an arms race of sorts as some retailers have responded with increasingly strong measures. Walmart is known for aggressively prosecuting shoplifters and has installed AI-powered cameras near its self-checkout areas with a “lost scan detection” feature. “It turns what should be a leisurely activity of shopping into a quasi-TSA airport security check,” says Andrews.

Measures such as these have garnered derision from employment lawyers. Marc Perrone, the president of the United Food and Commercial Workers International Union, which represents more than 1 million retail workers, says “a well-staffed store with well-trained staff checking out customers is the simple and smart solution”.

Instead, Perrone says, retailers like Walmart have increasingly sought to use self-checkout to cut jobs and boost profits.

A Walmart spokesman, Charles Crowson, declined to comment on the company’s self-checkout, but said the retailer is “continually exploring effective ways to protect merchandise, keep prices low and provide a safe environment for the millions of customers we serve each week.”

The kiosks present problems beyond theft. Self-checkout is often inaccessible to people with limited vision or wheelchair users, who complain that they are forced to flag down a cashier every time they use the computerized kiosks. The National Federation of the Blind sued Walmart in 2018 for violating the Americans with Disabilities Act by “excluding blind people from using the service in the way it was intended – independently and privately,” although a federal judge ruled in Walmart’s favor last year .

The check-out screens may also be a threat to your health, according to a recent study by the UK’s Infection Innovation Consortium which sampled a range of everyday items. “The self-checkout samples had one of the highest bacterial counts, as we found five different types of potential disease-causing bacteria surviving on them,” lead researcher Dr. Adam Roberts said in a statement. “This included Enterococciwhich is found in human faeces, and although this is usually harmless, it can of course lead to illness, especially in those who may have weakened immune systems.”

Could we ever see a world without self-checkout? Yes, if the customers refuse. “Companies are looking for creative ways to cut labor costs, and if they can figure out how to convince customers to do more of the work, they will,” says Andrews. “I am asking people to vote with your wallet. I went to my local supermarket the other night after work and filled up my shopping basket. The staff said to go to self check-out – and I just went. Because I thought, ‘I’m not going to sit here and scan 60 items. It’s just not worth my time.'”