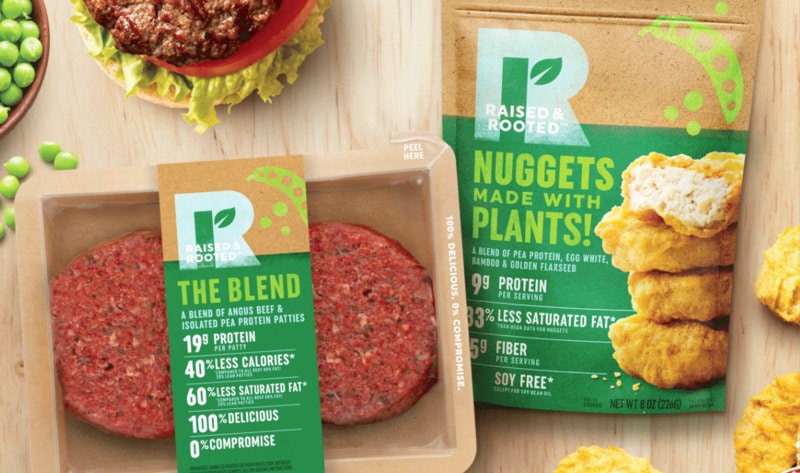 This week, the meat giant Tyson Foods announced the launch of its Raised & Rooted line, which focused on offering "tasting of plant-based and mixed foods rooted in how people eat today." The two products Tyson added first to the line include The Blend Burger Patties made mainly with beef and pea protein isolate-an important ingredient in many plant-based meat products and Nuggets Made With Plants, meatless nuggets containing egg white. "While most Americans still choose meat as their primary source of protein, interest in plant and mixed proteins is increasing significantly," said Noelle & 39; Mara, Chief Marketing Officer, Tyson Foods. "These products appeal to a wide cross-section of consumers enjoying food from a variety of protein sources, and we expect interest to continue to grow over protein types." Tyson previously held a 6.5 percent stake in Beyond Meat and sold its stake in the vegan company to pursue its own plant-based options ̵

1; which it has yet to add to its new line. "The Raised & Rooted launch and our innovation pipeline will reflect the consumer's expectations for 100 percent plant-based, mixed and traditional protein offerings," said Mara. Animal Rights Organization Compassion Over Killing (COK) criticized Tyson's new products, which, while exploiting the growing trend of plant-based foods, do not meet consumer demand in that space. "Although Tyson said that these" innovations "make it the biggest meat producer to enter the alternative protein area, we can't help but ask if a vegetarian and animal cage really counts," said COK. This new product contributes to massive factory plant suffering, where mild hens are limited to small cages that cannot stretch their wings or walk. Hens and cows deserve better, and even with this attempt to join the alternative protein site, Tyson falls behind. "