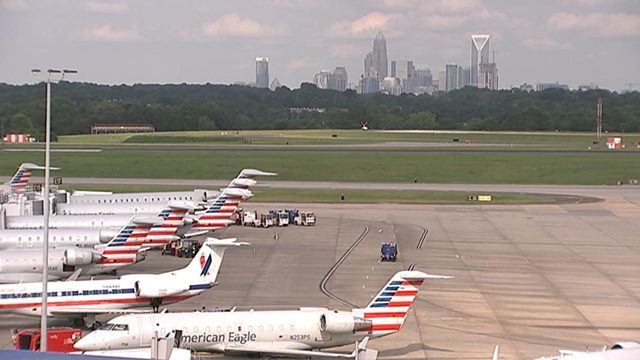 Two planes struck tails at Charlotte-Douglas ahead of takeoff officials

1; Two American Eagle aircraft operated by PSA Airlines collided while one was backing up on a Sunday morning at Charlotte Douglas Airport, according to American Airlines.

American Airlines said Flight 5141 headed to Augusta and Flight 5366 headed to Nashville , struck tails around 9:45 am while one of the planes was pulling back from the gate.

[ALSO READ: American Airlines flight out of Charlotte forced to turn back after odor fills cabin]

"They came together in one spot so I didn't know exactly what was happening. It was just a big commotion with a lot of firetrucks and normally you don't see things when we see planes take off and land here, "said Michelle Michelle." I haven't seen anything like this. " 19659006] According to officials, Flight 5141 was carrying 59 passengers and Flight 5366 was carrying 64 passengers. Both aircraft were reportedly out of service for inspection, meaning all passengers had been rebooked.

when all 123 people will make it to their destinations

Officially said the accident did cause a ground stop, prevent planes from landing or taking off for a short period of time.

Channel 9 is working to find out the extent of the damage to the planes.

Overlook spectators said all the commotion was an unusual sight and wondered if the weather had anything to do with the accident.

"I mean you hear about it once in a while, but it was foggy this morning too," Richard Graves said. "You hate to hear about it."

Check back with wsoctv.com for updates on this story.