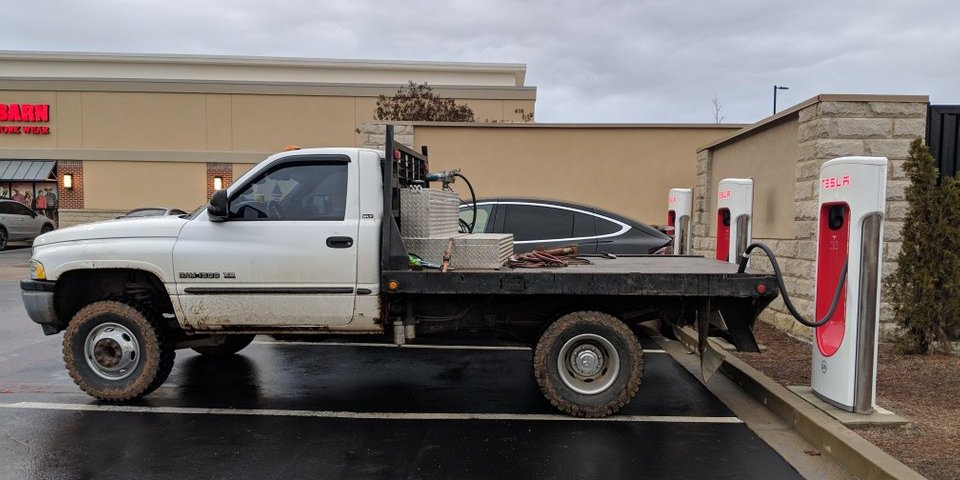 Tesla drivers are reporting on spate or "ICE-ing" (an acronym from Internal Combustion Engine) by large trucks at Superchargers across the country.

In one instance, Reddit user Leicina said a group of trucks blocked all of the charging spots while changing "F Tesla" before being asked to leave an employee of the store.

Like most superchargers, the location where the incident occurred – behind a Sheetz convenience store in Hickory, North Carolina, about 40 miles northwest of Charlotte – is not owned by Tesla. Rather, it's leased from third-parties, giving the company control over how the Supercharger spots are used from day to day.

"I was really uncomfortable," the Tesla owner said, adding that the Sheetz employees were "really understanding and sent someone out immediately."

A Sheetz spokesperson said the company was aware of the incident, and apologized for any inconvenience.

"Sheetz is proud to offer a wide variety of fueling options, including one of the largest networks of Tesla Superchargers," Nick Ruffner, the chain's PR manager, said in an email. "These spots are regularly monitored by our managers and employees ̵

1; who routinely ask other motorists to move their vehicles." Another Tesla owner in Bristol, Tennessee spotted a Dodge Ram truck blocking a charging spot, with the charging cable mockingly attached to the bed.

Laws about parking in reserved spots vary by state. In Arizona, for instance, its illegal to park in any parking space specially designated for parking and fueling motor vehicles fueled exclusively by electricity unless the motor vehicle is powered by electricity and has been issued an alternative fuel vehicle special plate.

The incidents aren't new and have owned owners for years online. (To be sure, may be accidental, but many – like the incident in Hickory, were clearly meant to provoke.) Some even love to shame their gas-guzzling peers when they park in EV charging spots.

A Tesla spokesperson did not respond to a request for comment.

Many people have compared the practice to "rolling coal," when diesel owners modify their engines to excess amount of fuel into the cylinders. The results in more horsepower and torque, but also black plumes of smoke when not all of the fuel can be burned.

In videos posted online, drivers brag about blowing clouds on protestors or an unlucky Prius on the highway.

The practice has been illegal at the federal level for years, and similarly was adopted by New Jersey in 2015.