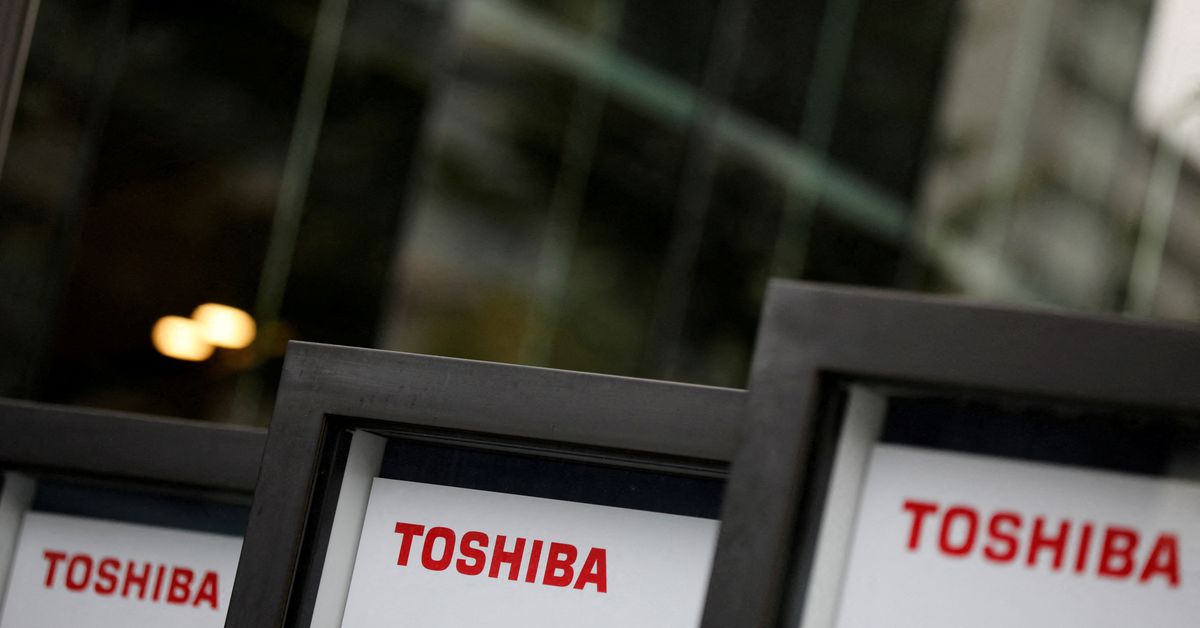 TOKYO, Oct 13 (Reuters) – Shares in Toshiba Corp ( 6502.T ) rose on Thursday after a report that a domestic investor-led group was eyeing a $19 billion bid – a potential deal that is likely to see foreign activist shareholders become bought out after years of excitement.

A consortium led by private equity firm Japan Industrial Partners and which also includes Chubu Electric Power Co ( 9502.T ) has been given preferred bidder status in the second bidding round, Kyodo news agency and other media have reported.

The ¥2.8 trillion figure quoted by Kyodo would mark a 26% premium to Wednesday’s closing price.

Shares rose 7% in afternoon trade, on track for their biggest one-day gain in more than a year. They have risen around 17% this year.

Once a major conglomerate, Toshiba has been weakened by accounting and governance scandals. Attempts to turn it around have been overshadowed in recent years by disagreements between management and its many activist shareholders.

The consortium will put up about ¥1 trillion in equity, with the rest of the money likely to come from bank loans, Kyodo said, adding that financing talks were ongoing and the offer value could change depending on future movements in Toshiba’s share price.

It was not immediately clear how many bids Toshiba is seriously considering, but the competition to take over the company is likely to remain an open race between Japan Industrial Partners and state-backed Japan Investment Corp, said Travis Lundy, a Quiddity Advisors analyst who publishes on the Smartkarma platform .

The two had previously teamed up to bid for Toshiba, but have since gone their separate ways, sources have said. Japan Investment Corp has since been in talks with private equity firm Bain Capital, one of several foreign funds that passed the first round of bids, local media have reported.

Toshiba and activist shareholders have been at odds over the direction of the company, with several large foreign funds pushing the conglomerate to consider private equity bids.

The tension culminated last year when a shareholder mandate investigation concluded that management had colluded with Japan’s trade ministry – which views the company’s nuclear and defense technology as a strategic asset – to block foreign investors from influencing the 2020 shareholder meeting.

“The only way to get rid of the activists is to buy them out,” Lundy said.