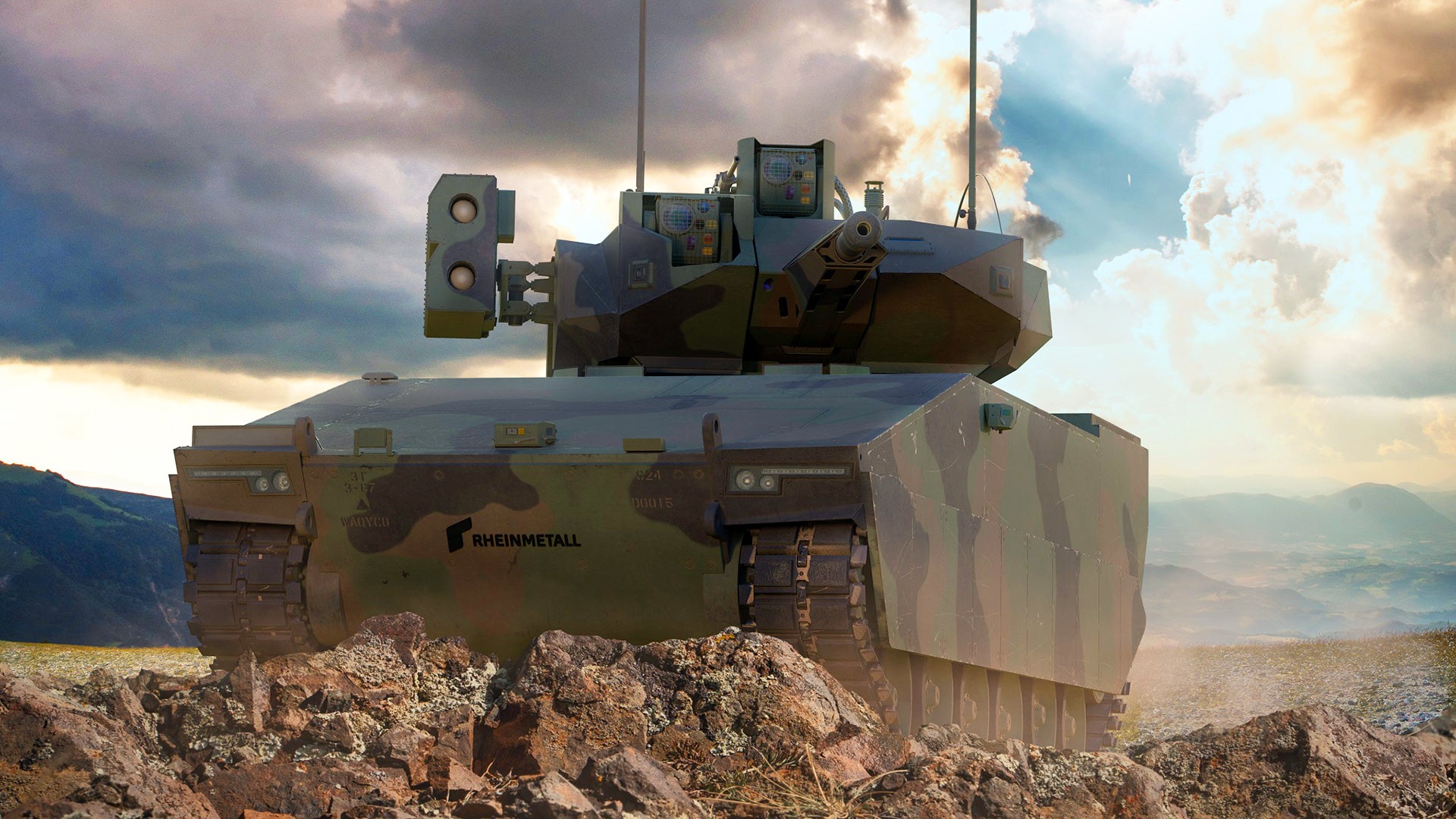 America’s Rheinmetall, the American subsidiary of the German arms and car maker, has unveiled a version of the Lynx infantry fighting vehicle that it is offering for the US Army’s Optionally Manned Fighting Vehicle, or OMFV, program that aims to replace the Bradley fighting vehicle. American Rheinmetall’s pitch will implement a number of modifications to its existing Lynx vehicle, ranging from an unmanned turret to a small roving contractor, in the hope of meeting the Army’s requirements for its next-generation armored fleet.

American Rheinmetall unveiled the Lynx OMFV during this year’s Association of the US Army Annual Meeting and Exposition conference in Washington DC, which is in its second day. The offering was developed under a multi-company consortium called ‘Team Lynx’ led by US-based Rheinmetall, along with Raytheon Technologies, Textron Systems, L3Harris Technologies, Allison Transmission and Anduril Industries.

Rheinmetall has been developing the Lynx series of tracked armored fighting vehicles since 2015. Originally designated as the KF31 infantry fighting vehicle (IFV), the first variant of the family was first shown at the Eurosatory defense exhibition in 2016 as a way to introduce a new generation of armor. Hungary is currently the only NATO and EU member state to have purchased the Lynx, and deliveries are scheduled to arrive next year. Australia, Greece, Iraq and the US are all potential buyers, with offers at various stages from the company. Lynx was also proposed to the Czech Republic and Slovakia, but was not chosen.

The Army has selected four companies in addition to American Rheinmetall to participate in the early phases of the OMFV program, which include BAE Systems, General Dynamics Land Systems, Oshkosh Defense and Point Blank Enterprises. Each company is expected to have a bid ready to offer the army by November 1, but American Rheinmetall has apparently released its offer just under a month early. The OMFV contract could be worth up to $45 billion for potentially thousands of vehicles and is slated to be awarded to the winning company by 2027.

As it stands, the Army’s OMFV effort, which seeks to develop an optionally manned IFV with increased lethality and survivability to replace its aging fleet of M2 Bradleys, is still in the initial stages of the overall procurement process. Essentially, American Rheinmetall has submitted its Lynx OMFV concept – capable of carrying two crew and six fully equipped soldiers – not as a prototype, but as a digital design for the Army to consider as it informs and matures its final OMFVs -claim. With Rheinmetall being the first to reveal its digital OMFV design, its exciting new high-tech addition could well set the bar for how the remaining entrants will be judged.

Among these modernizations is Allison Transmission’s contribution to the design: the company’s eGen Force Transmission. eGen will allow the Lynx OMFV to enable electric hybrid propulsion as well as ‘electric only silent manoeuvrability’ as described by American Rheinmetall. This basically means that the way eGen distributes power through the vehicle will allow it to travel with little or no noise emissions under certain conditions. It is also important to note that this is the first time this propulsion technology has been used in a tracked vehicle.

Among Raytheon’s sensor and weapons contributions to the project is what the company has dubbed its ‘Multi-Mission Launcher’. According to an American Rheinmetall, the Multi-Mission Launcher will be designed to fire anti-tank missiles such as the TOW and Javelin, as well as launch Coyote Block 3 loitering munitions drones ranging from the Lynx OMFV itself. However, the Army eventually wants to replace the TOW with a missile that fits the existing TOW launch architecture, so the TOW replacement could also be integrated into this launch pad, among other future weapons.

Another exciting feature of the Lynx OFMV is the vehicle’s new American Rheinmetall-designed unmanned turret. In its current configuration, the turret will host a large, hard-hitting XM913 50mm cannon. The vehicle’s secondary external weapons station is designed to accommodate a .50 caliber M2 machine gun along with other light and medium machine gun options, as well as grenade launchers.

The vehicle’s optimized two-man approach, with plenty of automation built in, also makes the leap to unmanned operations more seamless when the mission calls for it.

L3Harris will bring a modular open systems approach to the Lynx OMFV offering. In a press release, US-based Rheinmetall indicated that L3Harris’ contribution will form the vehicle’s overall mission management system, as the company will provide the electronics and cyber security that will apparently link the vehicle’s sensor, communications and targeting systems with the intention of lightening workloads and enhancing situational awareness. This will include what US-based Rheinmetall has dubbed the Lynx OMFV’s Ground Combat Systems Common Infrastructure (GCIA), which will host the modular electrical and software architecture.

“A 360-degree situational awareness system on the Lynx OMFV provides video for all crew members on board and allows dismounts to prepare for the mission while moving toward the target,” said a US press release from Rheinmetall. “The L3Harris WESCAM MX-GCS MK3 sight provides stabilized digital thermal, TV and IR capabilities with an integrated laser range finder and fire control unit. The flexible vehicle control architecture enables operation of all vehicle systems from multiple locations.”

The software to support Lynx OMFV’s GCIA will be developed by Anduril. The company will essentially provide the overall architecture’s digital backbone by fusing the vehicle’s on-board sensors to more accurately and efficiently represent targets of interest through what is called the Common Tactical Picture (CTP). The CTP will act as a sort of command and control center, which will be useful in facilitating the transmission of target information up the chain of command to ensure that the right effects are used to engage the right targets.

In addition to the advanced armor plating, to increase survivability, American Rheinmetall added that the Lynx OMFV can be equipped with Explosive Reactor Armor (ERA) as well as active protection systems. To improve situational awareness, survivability and the ability to return fire, the company says “with the integration of laser warning sensors, enemy fire detection and an active protection system, the crew is able to identify threats and provide location information to the crew and higher commands.” They also claimed that their OMFV offering will support levels of speed and mobility that the company claims are on par with the M1 Abrams.

Textron Systems will be the US-based manufacturing partner for Team Lynx. The company would build the Lynx OMFV’s chassis in collaboration with American Rheinmetall, which will manufacture the tower structures at a co-located Textron System facility in Slidell, Louisiana. All in all, Defend one noted in its article that the Lynx OMFV production activities across all six Team Lynx companies will span 16 states in total.

The Army’s OMFV program has been searching for years for a new and improved IFV to replace its existing fleet of M2 Bradleys, a design that is well over 40 years old. While the vehicles have undoubtedly cemented themselves as a recognized means of infantry transport and fire support since their staggered development and commissioning in 1981, a Congressional Research Service (CRS) report explained that Bradleys have been updated so many times over the years to keep up with the Army’s modernization efforts that the design has “reached the technological limits of its capacity to accommodate new electronics, armor and defense systems.”

In October 2018, after three failed attempts to replace the Bradley, the Army officially announced the OMFV program as part of the Pentagon’s larger Next Generation Combat Vehicle (NGCV) effort. After a couple of years spent recalibrating the program’s requirements, the Army finally revealed a five-phase approach to OMFV acquisition in April 2020, and the effort is now in Phase II, or the concept design phase.

Optionally manned capacities are a predominant expectation of the OMFV programme. In the same CRS report mentioned earlier, ‘optionally manned’ is listed first among the Army’s preliminary basic operational requirements for the OMFV, and it explains that the vehicle must have the ability to conduct remotely controlled operations while the crew is off-platform. The ability to keep soldiers away from the vehicle during certain operations would not only reduce the risk of loss of life in combat, but it could improve the overall lethality of other manned platforms that would potentially operate alongside and in conjunction with a future unmanned combat vehicle . . For example, General Dynamics Land Systems sees its future Abrams tank as working alongside unmanned vehicles, of which the OMFV could be a candidate. The precise control and communication architecture, as well as the embedded autonomy systems, needed to make such interconnection a reality remains to be fully seen.

Regardless of its updated technology and capabilities, the relevance of heavy armor on the modern battlefield is still debated. While there has certainly been an increase in arguments insisting that such vehicles are no longer necessary, especially if it were in something like a peer conflict in the Pacific, the central role of heavy armor throughout the war in Ukraine seems to make a other matter. .

As the deadline for digital design bids approaches on November 1, it will certainly be interesting to see how other companies’ proposals stack up against American Rheinmetall’s. The stakes are certainly high, with decades of production and support and tens of billions of dollars potentially at stake for whoever ends up delivering the Army’s next armored fighting vehicle.