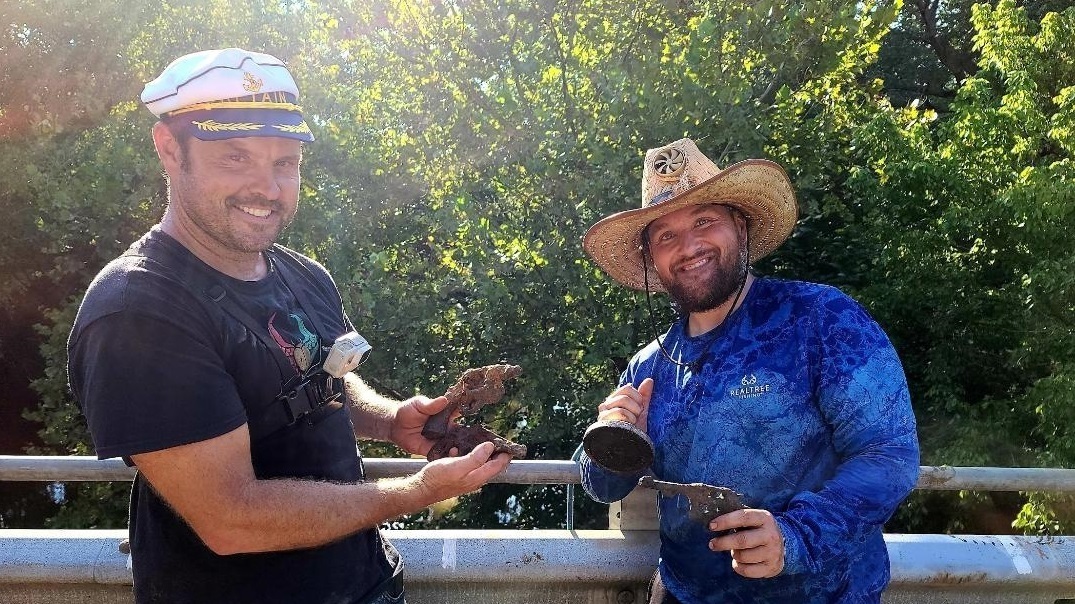 Brothers Jake and Adam Cowart show off a magnet fishing lure. They are among many who took up the hobby during the pandemic.

Brothers Jake and Adam Cowart show off a magnet fishing lure. They are among many who took up the hobby during the pandemic.

A war head from World War I and a dead blacktip shark attached to a metal hook are just some of the things magnet anglers have picked up around the US since the hobby surged in popularity following the onset of the coronavirus pandemic.

The hobby, which involves people throwing powerful magnets into waterways in search of treasure and trash, became an excuse for some to get some fresh air and for others to start businesses that cater to these hobbyists.

Joshua Dunlap, in northern California, is one such entrepreneur who started Centurion Magnetics in January 2020.

“Little did we know that COVID started a few months after [we launched] and it actually worked perfectly,” Dunlap told NPR over the phone. “It became a very popular hobby with people looking for ways to get out there to do something different. And magnet fishing happened to be one of those things. It’s all over the world, but very specific, definitely here in the United States.”

But the growth of these small businesses and the popularity of magnet fishing has become murky lately. They face two problems: China’s stranglehold on the rare earth element used to make these magnets and the high demand these materials are receiving from electric vehicle manufacturers and other green technology companies.

These are some of the guns the Cowart brothers have fished out of Georgia waterways.

These are some of the guns the Cowart brothers have fished out of Georgia waterways.

“The most important growth areas for the use of [magnets] is within the motors for electric vehicles. So any electric motor that uses a permanent magnet, and also generators for, say, wind turbines,” Merriman told NPR by phone from the UK.

How China developed its grip on neodymium mining

To understand why China has come to dominate global neodymium production, you have to go back to the 1980s and 1990s, Merriman said.

At the time, the United States and Australia were major producers of these rare earth elements because scientists from both countries developed the technology needed to extract these materials, he said. Unlike gold, which can be found in nature as nuggets, neodymium is found in various minerals and therefore requires a chemical process to “release the rare earths from the mineral structures,” Merriman said.

China soon realized it had significant deposits of rare earths “that were a byproduct of iron mining,” Merriman said.

“It noticed this as an opportunity,” he said of China at the time. “And that’s because of the more relaxed environment [and] social regulation within Chinese industry during that period, it was able to produce material very cheaply. So China started to undercut the production of rare earths, within these other regions, drove the price down and basically took market share globally.”

In the decades that have followed, China has continued to outperform other countries by expanding its reach thanks to state support and state control of mining, Merriman said.

As of November 2021, China controlled 87% of the global neodymium market, according to a report by MacroPolo, a Paulson Institute think tank based in Chicago.

These magnets have been called “crucial inputs” for electric vehicle motors, MacroPolo added. The element can also be found in smartphones and guided missiles.

Demand for neodymium “is likely to grow by an estimated 18% per year through 2030,” MacroPolo said. This cry is already being felt by small magnet fishing companies in the USA

There are enough metal “fish”, but not enough lures

Jose Torres was tired of sitting in his kayak and not getting any bites on his fishing line in Southwest Florida.

The fledgling YouTube channel he launched in 2013 to chronicle his best catches barely got any attention due to larger fishing channels with more resources and bigger, more exciting catches caught on video.

Then, last summer, Torres stumbled across videos of magnet fishing, and “it changed my YouTube channel tremendously,” he said.

Jose Torres holds up a boat propeller, boat trailer roller and a flywheel from an engine found in Tampa Bay.

Jose Torres holds up a boat propeller, boat trailer roller and a flywheel from an engine found in Tampa Bay.

Torres’ YouTube channel has grown from a few hundred subscribers to more than 3,000 today, he said. This has enabled him to monetize his YouTube channel with advertising.

He has also partnered with Centurion Magnetics as an affiliate, giving him a commission from every fishing magnet sale made with his unique code. This partnership was supposed to bring Torres significant money, but the reality has been anything but, he said.

“A lot of the problems we had, that I’ve experienced, is that my subscribers were emailing me left and right saying, ‘Hey, I’ve been trying to buy this magnet for the last month, two months, and it’s sold out, it’s sold out, when are you guys going to get these things in stock?” Torres said.

He said he has lost “hundreds, if not thousands, of dollars in commission sales revenue because of the lack of availability [and] their inability to get these magnets from China. So the industry has taken a big hit.”

Keeping magnets in stock is one of the most difficult parts of Dunlap’s job as CEO of Centurion Magnetics.

The combination of China’s control of the neodymium market, the high demand for these magnets and the global supply chain problems plaguing almost every industry due to the pandemic have meant that many Centurion products remain out of stock, Dunlap said.

“You know, being honest in stock is still the hardest thing that hits us… We would continue to build momentum, and then we ran out of stock,” he said. “Even if you look at our website now, we’re sold out of a whole line of magnets. We are trying to get them back in stock; it’s an achievement.”

While the growth of magnet fishing as a hobby remains uncertain, fishermen like Jake Cowart of Georgia find themselves happy with the magnets purchased at the beginning of the pandemic.

When COVID-19 shut down the filming business in Georgia, Cowart said his brother Adam — who are both dressers — was bored and convinced him to try magnet fishing after seeing a video of someone in the UK doing it.

Jake Cowart holds a piece of metal he fished out of Georgia’s Yellow River using his neodymium magnet.

The brothers have since pulled out relics dating back to the 1800s, safes, coins and dozens of weapons, Jake Cowart said. In July, Cowart said he fished out a World War I 37mm warhead that still had a fuse attached to it.

“I had to call an EOD [Explosive Ordnance Disposal specialist] and bomb squad out to have them take that thing and defuse it,” Cowart told NPR by phone. “I was scared, to be honest with you, because it’s a warhead, and it can explode with all kinds of blows . And it stuck to my magnet on the explosive side. So I was really, really, really freaked out by that.”

Cowart has yet to hear what happened to the bomb after law enforcement and EOD specialists arrived to retrieve it, he said.

Cowart and his brother have also pulled up guns that have helped solve cold cases, he said.

“No murders, but they were all gun shop robberies and things that were stolen from some older older people, you know, that ended some of the cases that were out in Athens, [Ga.],” he said. “It’s just something good to get out there for everybody to see, you know … we clean things up. We don’t want to get a bad, bad reputation that people think, and we try to try to catch all these people. But at the end of the day, if they’ve done something wrong, they have to be caught.”