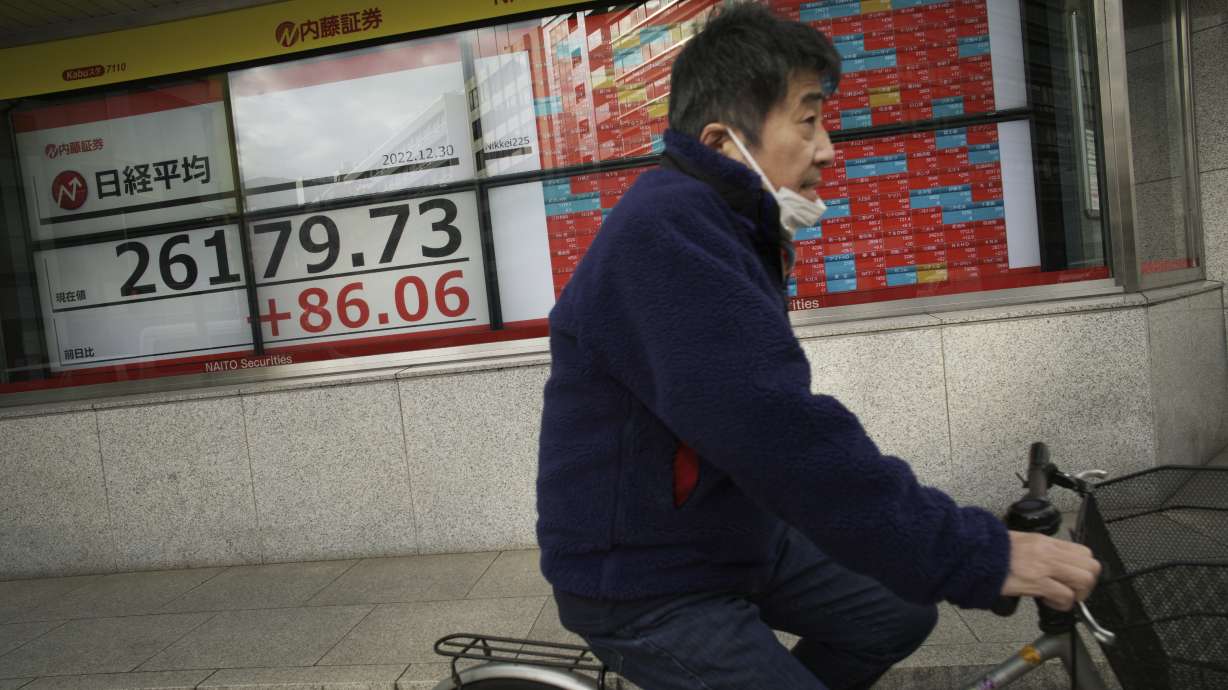 A man cycles past monitors showing Japan’s Nikkei 225 index at a securities firm in Tokyo, Friday. Asian stock markets followed Wall Street up on Friday after encouraging US employment figures, but were headed for double-digit losses for the year. (Hiro Komae, Associated Press)

NEW YORK – Wall Street ended a quiet day of trading with several losses on Friday as it closed the book on the S&P 500’s worst year since 2008.

The Nasdaq composite, with a heavy component of technology stocks, posted an even bigger loss of 33.1%.

The Dow Jones Industrial Average, meanwhile, posted an 8.8% loss for 2022.

Stocks struggled throughout the year as inflation put increasing pressure on consumers and raised concerns that economies would slide into recession. Central banks raised interest rates to combat high prices. The Federal Reserve’s aggressive rate hikes remain a key focus for investors as the central bank walks a fine line between raising interest rates enough to cool inflation but not so much as to stall the US economy into recession.

Rising interest rates prompted investors to sell the high-priced shares of tech giants such as Apple and Microsoft, as well as other companies that prospered as the economy recovered from the pandemic. Amazon and Netflix lost about 50% of their market value. Tesla and Meta Platforms, the parent company of Facebook, each fell more than 60%, their biggest annual decline ever.

Russia’s invasion of Ukraine exacerbated inflationary pressures earlier this year by making oil, gas and food prices even more volatile amid existing supply chain problems. Oil closed Friday around $80, about $5 higher than where it started the year. But in between, oil jumped above $120, helping energy stocks post the only gain among the 11 sectors in the S&P 500, up 59%.

China spent most of the year imposing strict Covid-19 guidelines, which limited production of raw materials and goods, but is now in the process of lifting travel and other restrictions. It is uncertain at this point what impact China’s reopening will have on the global economy.

However, the Fed’s fight against inflation is likely to remain the overriding concern on Wall Street in 2023, according to analysts. Investors will continue to search for a better sense of whether inflation is slowing fast enough to remove pressure from consumers and the Fed.

If inflation continues to show signs of easing and the Fed reins in its rate hike campaign, that could pave the way for a rally in stocks in 2023, said Jay Hatfield, managing director of Infrastructure Capital Advisors.

“The Fed has been overhanging this market really since last November, so if the Fed takes a break and we don’t have a major recession, we think that sets us up for a rally,” he said.

The Fed has been overhanging this market, basically since last November, so if the Fed stops and we don’t have a major recession, we think that sets us up for a rally.

There was little corporate or economic news for Wall Street to consider on Friday. That, plus the shortened holiday week, set the stage for mostly light trading.

Tesla rose 1.1% as it continued to stabilize after heavy losses earlier in the week. The electric car maker’s shares fell 65% in 2022, erasing about $700 billion in market value.

Southwest Airlines rose 0.9% as business returned to relative normalcy following massive cancellations over the holiday period. The share still ended down 6.7 percent for the week.

Bond yields mostly rose. The yield on the 10-year Treasury note, which affects mortgage rates, rose to 3.88% from 3.82% late Thursday. Although bonds usually do well when stocks fall, 2022 turned out to be one of the worst years for the bond market in history, thanks to the Fed’s rapid rate hikes and inflation.

Several major updates on the labor market are on tap in the first week of 2023. It has been a particularly strong area of ​​the economy and has helped create a bulwark against a recession. That has made the Fed’s job more difficult, however, because strong employment and wages mean it may have to remain aggressive to continue fighting inflation. This in turn increases the risk of slowing down the economy too much and leading to a recession.

The Fed will release minutes from its latest policy meeting on Wednesday, potentially giving investors more insight into its next moves.

The government will also publish its November report on vacancies on Wednesday. This will be followed by a weekly update on unemployment on Thursday. The closely watched monthly employment report is due on Friday.

Wall Street is also awaiting the latest round of corporate earnings reports, which will start pouring in around mid-January. Companies have warned investors that inflation is likely to reduce their profits and revenues in 2023. That’s after spending most of 2022 raising prices on everything from food to clothing in an attempt to offset inflation, although many companies went longer and actually padded their profit margins.

Companies in the S&P 500 are broadly expected to report a 3.5% drop in earnings during the fourth quarter, according to FactSet. Analysts expect earnings to then remain roughly flat through the first half of 2023.

The American stock exchanges will be closed on Monday for New Year’s Day.