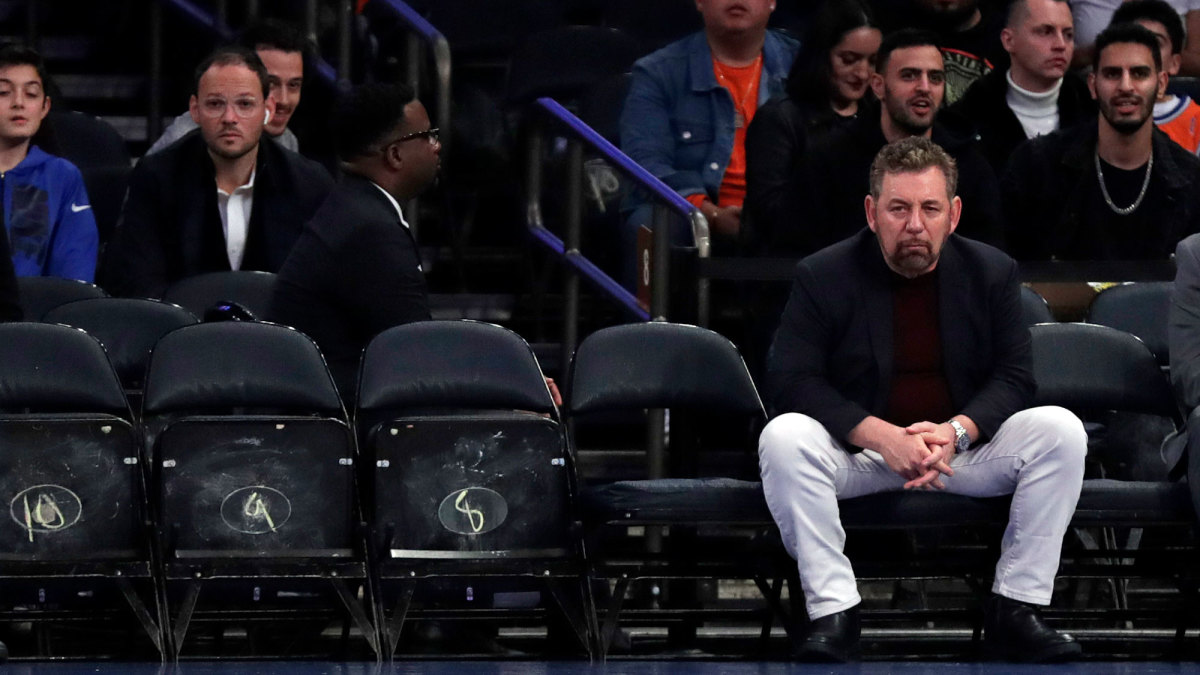 1 . To say that the Knicks franchise, led by a completely inept owner, has been a dumpster fire for the last 20 years, is not exactly a revelation.

Still, it's amazing to see the team create one PR nightmare after another just because James Dolan is so skinny.

It should not be shocking that the club would not respect the fans since it once kicked Knicks legend Charles Oakley out of Madison Square Garden, but the question is, where does the madness end?

According to a fan, he was escorted out of the seat by security guards at MSG Sunday night during the Knicks' # 108-87 blowout loss to the Cavs, who put the sad-sack team to 2-8, to start a "Fire Dolan ”sang.

SIX security guards to handle a fan? What a song? Really? Removed from the seat just to say "Fire Dolan?" Could you possibly be slightly weaker than James Dolan? And where will it end? Will he soon get people started booing?

Of course, Dolan is not the only one to blame for this mess. Any Knicks fan who actually spends his money and participates in games at Garden is as much to blame for his franchise status as anyone. What is the motivation for Dolan to fix things when his building is sold out every single night?

Chanting "Fire Dolan" does not send a message. Don't show up sends a message.

2 . The NFL gets all the attention for terrible official function, but let's not give college refs a pass. They considered a penalty on the wrong team Saturday because they got mixed numbers. Yes, you have read it correctly.

A Washington State player returned a Cal kickoff to the 50-yard line, but the referees called a hands-to-the-face penalty, which was marked half the distance to the goal from where the offense occurred, which pushed the Cougars back to their own eight-yard line.

However, the penalty was to be called the Bears, who would give Washington State the ball at Cal 35.

After the game, the referees explained that they intended to call the No. 15 penalty at Cal, but instead called it at No. 15 at Washington State. !!!

4 . The country was already taken aback by Joe Burrow fever after the quarterback pitched against Alabama and made the day miserable for Nick Saban, but he really put the cherry on top of Sundays by twittering right after LSU's 46-41 victory.

5 . Speaking of outstanding tweets after a game, this was an excellent effort by Jets defensive back Jamal Adams, who scored a touchdown after literally taking the ball from Giants quarterback Daniel Jones.

6 . The latest SI Media Podcast is out, and it's a great one if you're looking for a fun, light-hearted listen. Kay Adams and Chris Long, who hosted Amazon Prime on Thursday night NFL Preview NFL Next joined the podcast for a free-spirited conversation about everything from wardrobe previews to naps to clutter with grown-up players pimples. There was also football talk with Long that shared stories about Bill Belichick, why the Browns are so bad and the NFL's pass interference problem.

Following Adams and Long, New York Post sports media columnist Andrew Marchand joined the podcast 54 minutes inside to discuss all the latest news about Mike Francesa and his latest saga with WFAN.

You can listen to the podcast below or download it at Apple, Spotify, Stitcher and Google Play.