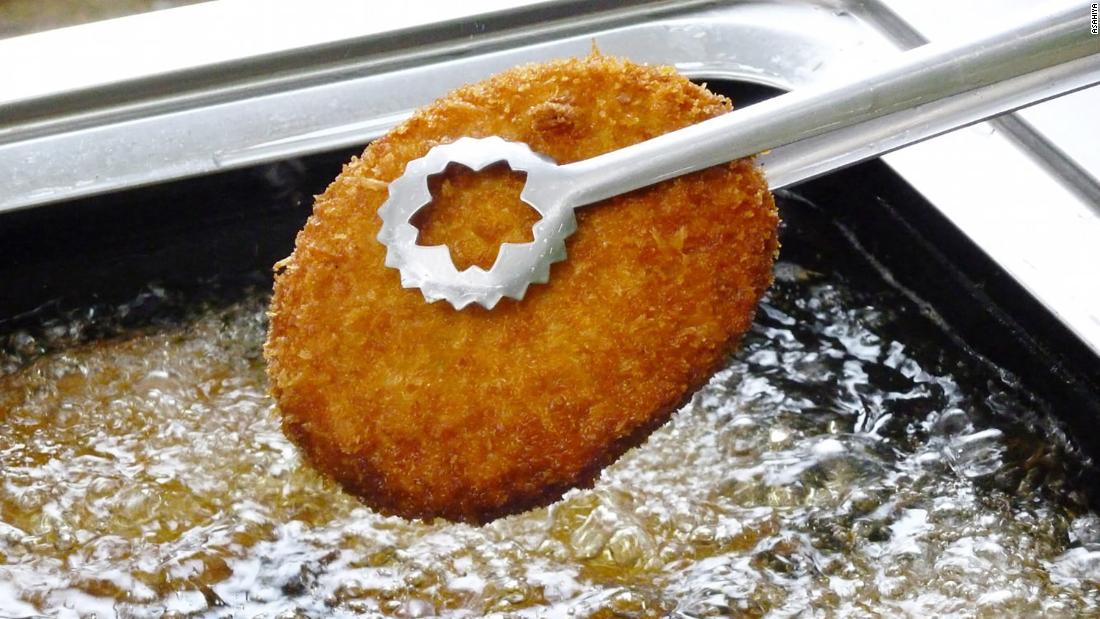 Editor’s Note – Sign up for Unlocking the World, CNN Travel’s weekly newsletter. Get news on destination openings, inspiration for future adventures, plus the latest in aviation, food and drink, where to stay and other travel developments.
(CNN) — If you order a box of frozen Kobe beef croquettes from Asahiya, a family-run butcher shop in Takasago City in Hyogo Prefecture in western Japan, it will be another 30 years before you receive your order.

Founded in 1926, Asahiya sold meat products from Hyogo Prefecture — Kobe beef included — for decades before adding beef croquettes to its shelves in the years after World War II.

But it wasn’t until the early 2000s that these deep-fried potato and beef buns became an internet sensation, resulting in the ridiculously long wait times shoppers now face.

“We started selling our products through online shopping in 1999,” explains Shigeru Nitta, third-generation owner of Asahiya. “At the time, we offered Extreme Croquettes as a trial.”

Nitta grew up in Hyogo and has visited the local ranches and beef auctions with her father since he was young.

After experimenting with e-commerce for a few years, he realized that customers were hesitant to pay a hefty sum for premium steak online.

Shigeru Nitta is the third generation owner of Asahiya.

That’s when he made a bold decision.

“We created affordable and tasty croquettes that demonstrate the concept of our store as a strategy to get customers to enjoy the croquettes and then hope that they will buy our Kobe beef after the first try.”

To limit the financial loss in the beginning, Asahiya produced only 200 croquettes in their own kitchen next to the shop every week.

“We sell beef raised by people we know. Our shop only sells meat that was produced in Hyogo Prefecture, whether it’s Kobe beef, Kobe pork or Tajima chicken. This has been the style of the shop since before I became the owner,” says Nitta .

In fact, Nitta’s grandfather used to ride to Sanda – another famous Wagyu breeding area in Hyogo – by bicycle with a handcart to collect the produce himself.

“Since around that period, our shop has had connections with local beef producers, so we didn’t have to get them from outside the prefecture,” adds Nitta.

Production increased, but popularity is growing

The cheap price tag of Extreme Croquettes is belied by the quality of the ingredients. They are made fresh daily without preservatives. The ingredients include three-year-old female A5-rated Kobe beef and potatoes sourced from a local ranch.

Nitta says he has encouraged the ranch to use cow manure to grow the potatoes. The stalks of the potatoes will then be fed to the cows, creating a cycle.

Eventually, his unique concept caught the attention of locals and the media. When a report about Asahiya’s croquettes came out in the early 2000s, their popularity skyrocketed.

– We stopped selling them in 2016 because the waiting time was over 14 years. We thought about stopping orders, but we received many calls asking to continue offering them, says Nitta.

Extreme croquettes are made with three-year-old female A5-rated Kobe beef.

Asahiya resumed taking orders for these croquettes in 2017, but raised the price.

“At that time, we raised the price to JPY500 ($3.4)-JPY540 ($3.7) with consumption tax. But since the export of Kobe beef started, the prices of beef have doubled, so the fact that the production of croquettes is running a deficit has didn’t change, says Nitta.

“In reality, Extreme Croquettes became much more popular than other products,” chuckles Nitta, laughing at her own money-losing business idea.

“We hear that we should hire more people and make croquettes faster, but I don’t think any shop owner hires employees and produces more to make more deficit… I feel sorry for them waiting. I want to make croquettes. quickly and send them as soon as possible, but if I do, the shop will go out of business.”

Fortunately, Nitta says that about half of those who try the croquettes end up ordering Kobe beef, so it’s a good marketing strategy.

The store regularly sends a newsletter to waiting customers and updates them on the latest shipping estimate.

One week before the delivery date, the store will confirm the delivery with the patient customers once again.

“Obviously, some people have changed their email addresses. For those people, we call them directly and let them know the delivery date. They can change the address themselves through our website, or when we call them, they can let us know.” says Nitta.

Customers who receive croquettes these days placed their orders about 10 years ago.

Having a 30-year backlog of unprofitable orders to fulfill can be stressful, especially as the price of Kobe beef and labor continues to rise.

But something more important has encouraged Nitta to continue.

The wait for these frozen extreme croquettes is currently around 30 years.

“When I started selling croquettes on the internet, I got a lot of orders from remote isolated islands. Most of them had heard about Kobe beef on TV but had never had it because they had to go to cities if they wanted to try it. I realized that there were so many people who have never had kobe beef.

“For that reason, I kept offering croquettes as a trial and getting more orders for Kobe beef if they liked it. That’s why I started it in the first place, so I didn’t really care if it was a deficit,” says Nitta.

One of the most memorable moments was when they received an order from a cancer patient undergoing surgery while waiting for their Extreme Croquettes.

“I heard that our croquettes were the patient’s motivation to go through with the operation. That surprised me the most,” says Nitta.

The patient survived and placed several orders since then.

Nitta received a call from the patient who told him “I hope to live a long time without the cancer coming back” after sampling his croquettes.

“I still remember it. I was touched by the comment,” says Nitta.

By allowing more people to enjoy Kobe beef, he hopes the fame of these croquettes will help promote the local industry.

“I’m grateful. By becoming famous, I think I can help the whole industry, not just my shop, by getting people who haven’t been interested in Kobe beef interested. I want as many people as possible to eat Kobe beef – not just from my shop, says Nitta.

How to try beef croquettes now

Asahiya now has two locations: their original store in Takasago City and a store in Kobe City. Its frozen beef croquettes ship domestically only.

Although Asahiya primarily operates as a butcher, Nitta says travelers can visit their Kobe store, where they sell two types of ready-to-eat takeaway snacks, called “Tor Road” and “Kitanozaka” croquettes, named after nearby streets.

– We store the meat for 40 days and the potatoes for one month to make them sweeter, says Nitta.

As for the future, the 58-year-old owner says they are considering expanding.

“I’d like to make a little space where people can eat a little bit, maybe. Our Kobe store is a tourist spot,” he says. “But if it becomes a restaurant, our neighboring restaurants might be annoyed because we supply the meat to them as well.”