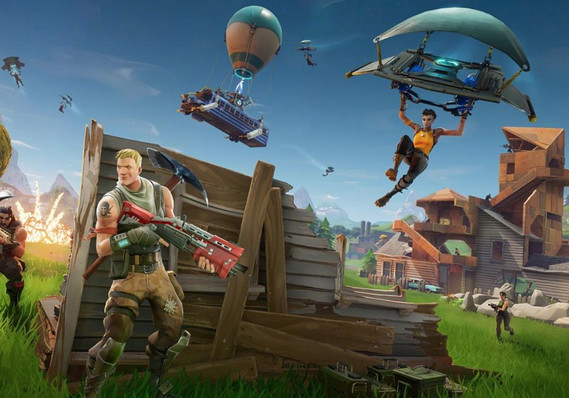 The outsize success of "Fortnite" has started to punish the world's largest videogame makers.

shares plummeted 13.8% after both publishers predicted worse financial performance in the current quarter than expected. Other videogame makers suffered too, with Activision Blizzard

stock falling 1.5% before a rebound in after hours trading following strong earnings. The S&P 500 index

"Fortnite," which is made by Tencent Holdings Ltd.

-backed Epic Games Inc., had a massive impact on the videogame sector, attracting millions of players and making it the most financially successful free-to-play video game or all time. Game makers such as Activision, EA and Take-Two have struggled to develop and release games that successfully compete with "Fortnite" as the game has transformed into something of a cultural phenomenon.

While EA did not cite "Fortnite" specifically as a factor contributed to its disappointing earnings Tuesday, executives admitted that not including a "battle royal" mode – the online, multiplayer version that helped make "Fortnite" a runaway success – with marquee holiday title "Battlefield V" was a significant strategic error. The latest "Battlefield" title contains different forms of online, multiplayer modes as well as a single-player component, but it does seem to be finding sales growth from that.

"Our launch [of ‘Battlefield’] didn 't resonate as we would have liked to with players, and we were never really able to catch up," Andrew Wilson said in a conference call Tuesday. "And as our competitors continued to build momentum, whether that was 'Fortnite' or 'Red Dead Redemption 2' or 'Call of Duty,' we continued to stall from where we needed to be.”

Wedbush analyst Michael Pachter wrote in a note Wednesday that earnings were "significantly" below expectations because of problems with competition from the likes of "Fortnite" and issues with how executives managed the launch of "Battlefield V." Pachter lowered his price target to $ 95 from $ 110 while maintaining a buy rating on the stock. J.P. Morgan analyst Alexia Quadrani also lowered her target price, to $ 99 from $ 130.

Take-Two's premier offering during the holiday season, "Red Dead Redemption 2," has a massive single-player campaign – Take-Two says it has the most lines of dialogue in a video game – but the game is launched without a multiplayer component altogether. Take-Two has since added to multiplayer mode, and analysts expect that component to generate revenue through additional content as sales of the game itself slow over time.

Take-Two's results, released Wednesday morning, beat expectations for the holiday quarter but – like EA – failed to meet Wall Street expectations for the current quarter, projecting lower profit and revenue. Chief Financial Officer Lainie Goldstein said the company is expecting online content for "Red Dead Redemption 2" to "accelerate" in the fiscal first quarter of 2020, which starts in April, and as a result is expected more sales in that period. [19659002] In Take-Two's earnings call, executives brushed aside concerns about "Fortnite" and its blockbuster success, though.

"I would just observe, we continue to have stellar results despite the fact that there are competitive titles in the market, including" Fortnite, "CEO Strauss Zelnick said. He added that while the company experienced record results last year for “Grand Theft Auto Online,” “Fortnite” was doing very well too.

See also: This violent video game has made more money than any movie ever

"I don't see any crossover," Zelnick said. "And I think if you want to step back from it, you'd say, it's almost certainly a good thing when there is a multiplicity of hits – bringing in a bigger audience, perhaps more diverse audience. We think that is the case. ”

In a note to clients Wednesday, KeyBanc Capital Markets analyst Evan Wingren wrote that Take-Two was being" oversold "by investors and that its third-quarter earnings were better than expected. Called its current valuation “harsh” and said executives delivered “above average execution, growth and pipeline potential.” Wingren has the equivalent of a buy rating on the stock with a $ 152 price target.