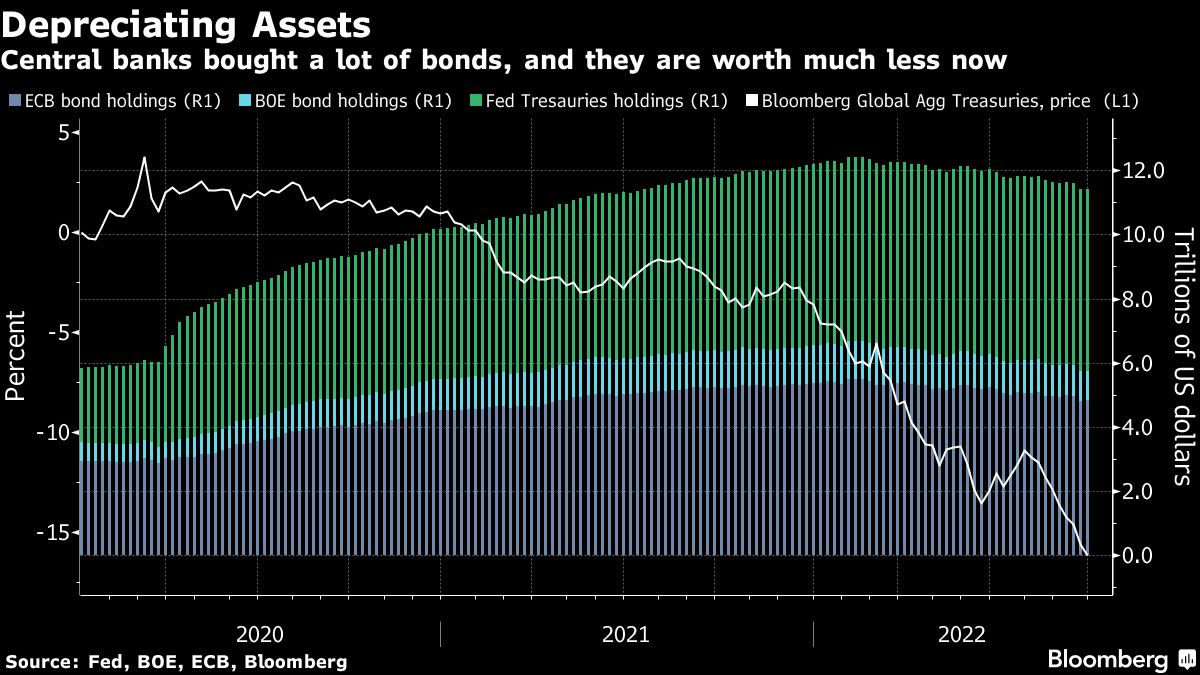 (Bloomberg) — Profits and losses are not usually seen as a consideration for central banks, but rapidly increasing red ink at the Federal Reserve and many peers risks becoming more than just an accounting quirk.

The bond market is enduring its worst sell-off in a generation, triggered by high inflation and the aggressive interest rate increases implemented by central banks. Falling bond prices in turn mean paper losses on the massive holdings that the Fed and others accumulated during the rescue efforts in recent years.

Interest rate increases also mean that central banks pay out more interest on the reserves that commercial banks park with them. That has tipped the Fed into operating losses, creating a hole that may eventually require the Treasury Department to fill via debt sales. The British Treasury is already preparing to absorb a loss in the Bank of England.

The UK̵[ads1]7;s move highlights a dramatic shift in countries including the US, where central banks are no longer significant contributors to government revenue. The U.S. Treasury Department will see a “fantastic swing,” going from receiving about $100 billion last year from the Fed to a potential annual loss rate of $80 billion by year-end, according to Amherst Pierpont Securities LLC.

The accounting losses threaten to fuel criticism of the asset purchase programs launched to rescue markets and economies, most recently when Covid-19 shut down large parts of the global economy in 2020. Coinciding with the current burst of inflation, it could spur calls for to rein in. monetary policy decision-makers’ independence, or limit what steps they can take in the next crisis.

“The problem with central bank losses is not the losses themselves – they can always be recapitalized – but the political setbacks central banks are likely to increasingly face,” said Jerome Haegeli, chief economist at Swiss Re, who previously worked in Switzerland. central bank.

The following figures illustrate the extent of operating losses or market balance losses that are now materializing:

While for a developing country losses in the central bank can undermine confidence and contribute to a general exodus of capital, such credibility challenges are not likely for a rich nation.

As Seth Carpenter, global chief economist for Morgan Stanley and a former US Treasury official put it: “The losses don’t have a material effect on their ability to conduct monetary policy in the near term.”

RBA deputy governor Michele Bullock said in response to a question last month about the RBA’s negative equity position that “we don’t think we’re impacted at all in our capacity to operate.” After all, “we can create money. That’s what we did when we bought the bonds,” she noted.

But it can still have consequences. Central banks had already become politically charged institutions after, by their own admission, they failed to anticipate and act quickly against burgeoning inflation over the past year or more. Suffering losses provides another magnet for criticism.

For the European Central Bank, the potential for mounting losses comes after years of government bond purchases carried out despite reservations from conservative officials who say they are blurring the lines between monetary and fiscal policy.

With inflation at five times the ECB’s target, pressure is mounting to dispose of bond holdings – a process known as quantitative easing that the ECB is currently preparing for even as the economic outlook darkens.

“While there are no clear economic constraints on the central bank running at a loss, there is the possibility that these will become more of a political constraint on the ECB,” said Goldman Sachs Group Inc. economists George Cole and Simon Freycenet. In northern Europe in particular, “it can fuel the discussion about quantitative tightening.”

President Christine Lagarde has given no indication that the ECB’s decision on QT will be driven by the prospect of incurring losses. She told lawmakers in Brussels last month that generating profits is not part of central banks’ remit, insisting that fighting inflation remains politicians’ “sole purpose”.

The Bank of Japan remains apart for now, has not raised interest rates and has continued to impose a negative interest rate on a portion of banks’ reserves. But things could change when Governor Haruhiko Kuroda steps down in April, and his successor is confronted with historically high inflation.

As for the Fed, Republicans have previously expressed opposition to its practice of paying interest on bank surplus reserves. Congress gave this authority back in 2008 to help the Fed control interest rates. With the Fed now racking up losses, and Republicans potentially taking control of at least one chamber of Congress in the November midterm elections, the debate could resurface.

The Fed’s turnaround may be particularly noteworthy. After paying as much as $100 billion to the Treasury in 2021, it could face losses of more than $80 billion on an annual basis if policymakers raise interest rates by 75 basis points in November and 50 basis points in December — as markets expect — estimates Stephen Stanley, chief economist for Amherst Pierpont.

Without the income from the Fed, the Treasury must sell more debt to the public to finance government spending.

“This may be too mysterious to hit the public’s radar, but a populist could turn the story in a way that will not reflect well on the Fed,” Stanley wrote in a note to clients this month.

–With assistance from Garfield Reynolds.

(Adds reference to Bank of Japan after “BOJ, Fed” subheading.)