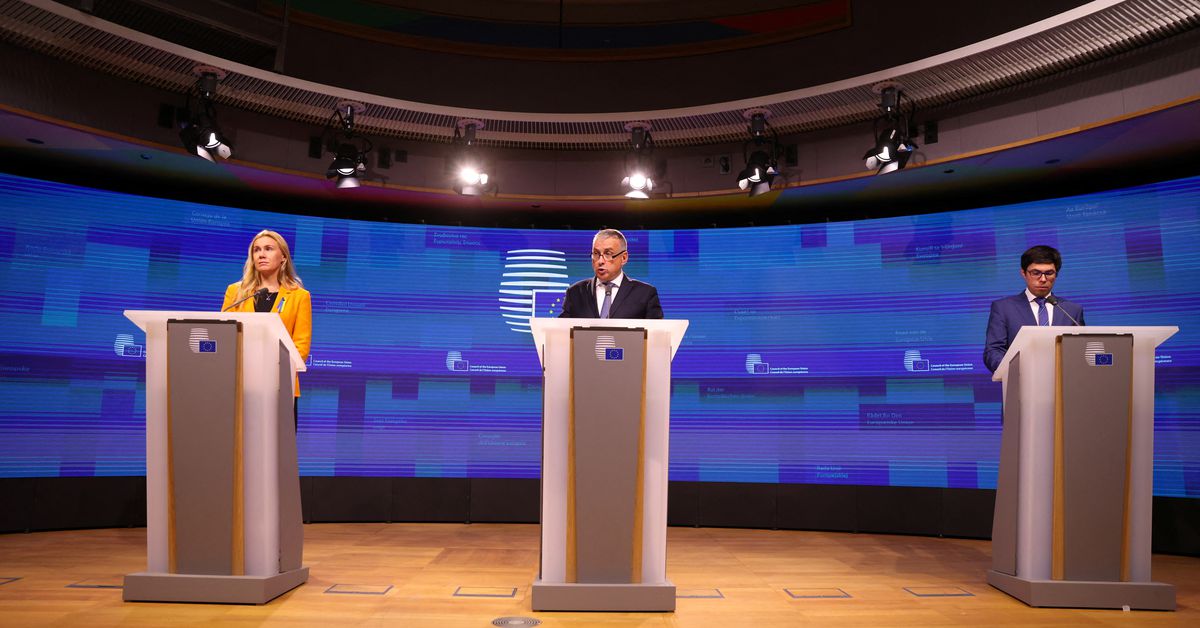 BRUSSELS, Sept 9 (Reuters) – European Union energy ministers on Friday tasked the European Commission with pushing through a cap on the revenues of non-gas power producers benefiting from soaring energy prices, while backing away from capping Russian gas prices .

Looking for ways to help with rising consumer bills, the ministers asked the European Commission to prepare other emergency measures, including a broader gas price cap not specifically aimed at Russia, according to a meeting summary published by the Czech Republic, which holds the rotating EU presidency.

President Vladimir Putin said this week that Moscow would cut all supplies to Europe if a price cap were imposed on Russian gas.

The EU’s surprise plan, which has yet to be fleshed out, would see governments skim excess revenue from non-gas energy producers who can currently sell their power at sky-high prices determined by the price of gas, using the money to defray consumer bills.

Fossil fuel companies will also have to pay a “solidarity contribution”, says the meeting summary.

“The measures the commission has recommended, by taking some of those surpluses and recycling them back to households, make sense,” Irish Environment Minister Eamon Ryan said on Friday.

The commission is expected to publish details of the proposals next week. Energy ministers may hold another emergency meeting later this month to negotiate and approve the final plans, two EU diplomats told Reuters.

“Everyone is in a hurry to find a solution,” said Sweden’s Energy Minister Khashayar Farmanbar.

A proposal to limit Russian gas prices did not receive broad support among the EU countries, the meeting summary showed.

Brussels had proposed that the EU put a cap on the price it pays for Russian gas – an idea backed by Baltic states that said it would deprive Moscow of money to fund military action in Ukraine.

But Central and Eastern European states still have some fear of Russian fuel leading to a total cut-off. Countries including Belgium had questioned whether a cap would have much of an impact on reducing prices when supplies from Moscow are so low.

“If price restrictions were to be imposed exclusively on Russian gas, it would obviously lead to an immediate cut-off of Russian gas supplies.” Hungarian Foreign Minister Peter Szijjarto said so.

The European Commission, which did not include a general gas price cap in a list of measures it proposed to countries ahead of the meeting, warned that capping liquefied natural gas prices in Europe could risk supplies going to other markets, depriving Europe the much-needed fuel.

“We have to be careful that we don’t jeopardize our security of supply situation,” Simson said.

Energy bills, already rising as demand for gas recovered from the COVID-19 pandemic, have risen higher since the Ukraine war.

Russian gas pipeline deliveries via the three main routes to Europe have fallen by almost 90% in the past 12 months, data from Refinitiv shows. Moscow has blamed supply cuts on technical problems caused by Western sanctions over its invasion of Ukraine.

As for the windfall profit plan, a draft of the upcoming commission’s proposal, seen by Reuters, would cap earnings for wind, nuclear and coal generators at 200 euros ($202) per megawatt hour.

European power prices are typically set by gas plants, so the cap will aim to skim off profits in recent months by those producers who have lower operating costs but have still been able to sell their power at sky-high prices.

Finland and Sweden have already offered billions of dollars in liquidity guarantees to power companies in a bid to prevent the cash crunch from toppling businesses.