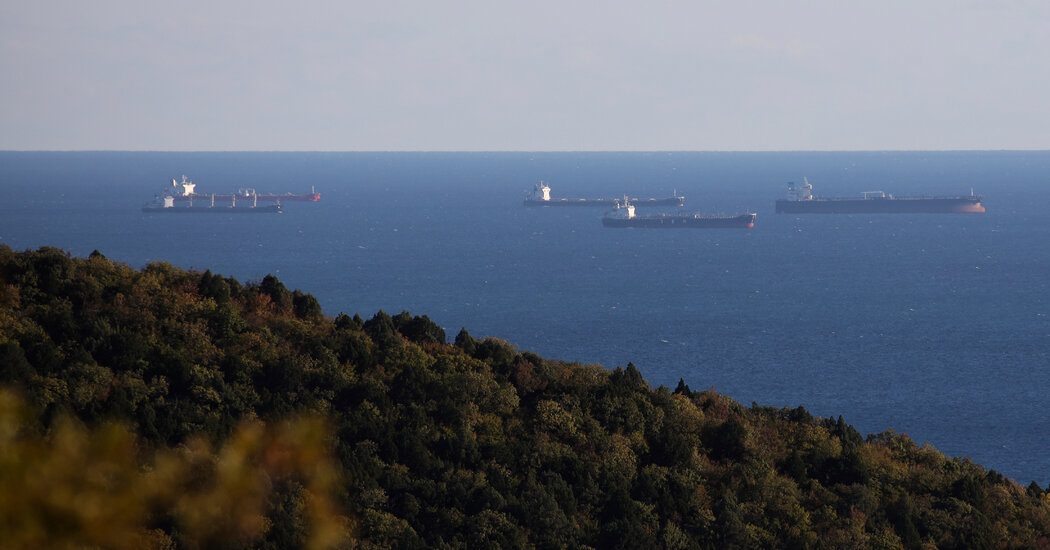 A complex effort by Ukraine’s allies to deprive Russia of billions of dollars in oil revenue by capping the price paid for crude reaches a crescendo this week.

EU diplomats will meet on Wednesday to try to set that price after discussions with the US and other Group of 7 industrialized nations, with two weeks to go before the tariff takes effect.

The diplomatic meeting in Brussels will mark the final phase of implementing the policy that requires regulatory and logistical adjustment in the complicated business of ferrying the fuel out of Russia to markets such as India and China.

The policy must be in place by December 5, when the EU’s near-total embargo on Russian oil begins, one of many actions the bloc has taken to hamper Russia’s economy and limit its ability to wage war in Ukraine.

The idea behind setting a price cap is to limit the revenue Russia can earn from its oil exports, while avoiding fuel shortages, which would force prices up and exacerbate a cost-of-living crisis around the world.

The way the G7 nations want to make this work is by putting the burden of implementing and controlling the price cap on the businesses that help sell the oil: global shipping and insurance companies, which are mostly based in Europe.

This is why the regulations to enforce this measure must be adopted in Europe as well as other G7 members such as the US, UK and Japan, which also host companies active in the transport or insurance of Russian oil.

EU ambassadors must approve the price per barrel unanimously. The decision is expected on Wednesday, several diplomats said, but there could be delays.

Because the tariff will require a change in the EU’s sanctions against Russia, unanimous agreement among the 27 EU countries on the price is necessary.

Seven senior EU diplomats said there was political support for the policy, but opinions differed on where the price should be set. They spoke on condition of anonymity because they did not want to disrupt ongoing conversations.

The idea is to set the price high enough above the cost of extracting oil to motivate the Russians to keep selling, but low enough to make a meaningful dent in the profits they make.

The cost of extraction per barrel in Russia is estimated between $12 and $20; Russian oil recently traded at nearly $70 a barrel on global markets. Treasury Secretary Janet L. Yellen and several European diplomats have cited $60 a barrel as a potential price. But EU diplomats from nations closer to Ukraine that take an even stronger pro-Ukraine line have indicated they prefer a lower price.

The US is letting the EU take the lead in setting a price that could win approval there. A Treasury Department spokesman said the U.S. has no plans to privately propose an award to European partners.

What we consider before using anonymous sources. Know the sources of the information? What is their motivation for telling us? Have they proven reliable in the past? Can we confirm the information? Even with those questions satisfied, The Times uses anonymous sources as a last resort. The reporter and at least one editor know the source’s identity.

Diplomats from Poland and its Baltic neighbors said they also want to see the price cap come with commitments for sanctions that would target continued protected European trade with Russia, such as diamonds and nuclear reactor fuel.

The European Union’s embargo on Russian oil that begins Dec. 5 also includes a ban on European services from sending, financing or insuring Russian oil shipments to destinations outside the bloc, a measure that would disable the infrastructure that moves Russia’s oil to buyers around the world. world.

To implement the price cap, these European shipping providers will instead be allowed to transport Russian crude oil outside the bloc only if the shipment complies with the price cap. In other words, it will be left to them to ensure that the Russian oil they transport or insure is sold at or below the ceiling price; else, they will be held legally responsible for sanctions violations.

Those shipping industries at the center of enforcing the price cap remain in the dark about the price and other details of how the tariff will work. The marine insurance industry, which has been skeptical of the idea from the start, said it would do its best to comply.

Lars Lange, secretary general of the International Union of Marine Insurance, a trade association based in Germany, said that regardless of where the price is set, suppliers will ensure that insurance is “only provided for shipments below this price per unit”.

Rachel Ziemba, an adjunct senior fellow at the Center for a New American Security, said G7 allies appear to have different priorities when it comes to setting the price ceiling. The US has been focused on keeping Russian oil on the market, while the EU wants to starve Russia of as much income as possible.

A delay in setting a price could disrupt the flow of Russian oil as the deadline approaches.

“The longer it is before there is a price released, the greater the risk of more oil temporarily coming off the grid because buyers will wait and see,” Ziemba said.

In an interview this month ahead of the Group of 20 leaders summit in Bali, Yellen said it has been challenging for Europe to agree on the mechanics of the price ceiling.

“It requires the agreement of a large number of countries, and the European Union requires unanimity,” Yellen said, adding that she is optimistic it will be done. “We are actively working to put it in place and it will certainly be done by December 5th and hopefully before that.”

The US has resisted publicly proposing a price for the tariff, preferring instead to set broad parameters.

“We want to make sure it’s high enough that they keep the incentive to sell,” Yellen said. “We don’t want it to be financially beneficial for them to just shut it down.”

Officials in the Biden administration say they are confident the proposal has already achieved one main goal — to reassure oil traders ahead of a possible major disruption when sanctions come online.

Oil prices have drifted lower in recent weeks, and on Monday briefly fell to their lowest level since January, before Russia invaded Ukraine. U.S. officials are reading those prices as a sign that traders aren’t worried about Russia pulling millions of barrels from the market next month.

Keeping oil flowing – and minimizing the risk of another oil price increase – has always been the Biden administration’s primary goal with the price cap plan. Denying Russia revenue, and potentially hastening the end of the war, would be an added and welcome advantage for Mr. Biden.