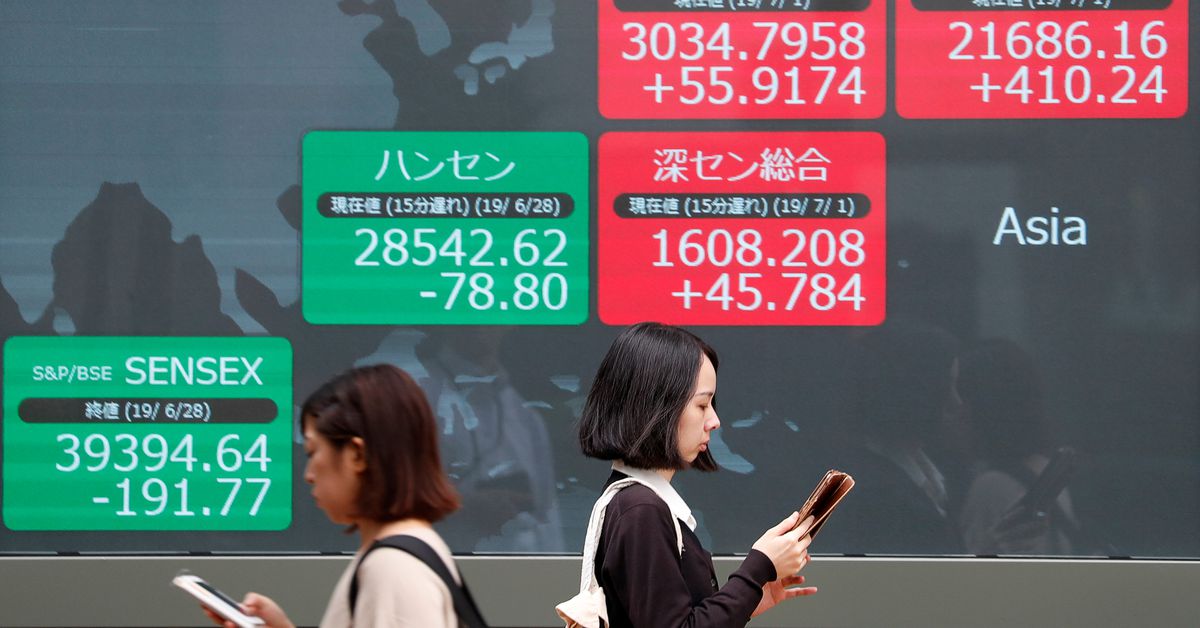 LONDON, Jan 3 (Reuters) – The dollar was on course for its biggest one-day gain in more than three months on Tuesday, while stocks rose in a macro-heavy week that could provide guidance on when and at what level U.S. interest rates may peak.

The MSCI All-World Index (.MIWD00000PUS) was roughly unchanged, although European stocks, led by big gains in everything from financials to oil and gas stocks to health care, jumped to two-week highs.

Typically, stocks tend to fall when the dollar rises, but the negative correlation between the two eased on Tuesday to its weakest since early September. The dollar index was last up 1% at 104.69.

The euro was the worst performer against the dollar, falling the most since late September, after German regional inflation data showed consumer price pressures eased sharply in December, thanks in large part to government measures to limit natural gas bills for households and businesses.

US payrolls data this week is expected to show the labor market remains tight, while EU consumer prices may show some easing in inflation as energy prices ease.

“Energy base effects will lead to a significant reduction in inflation in major economies in 2023, but stickiness in core components, much of this stemming from tight labor markets, will prevent an early dovish policy ‘pivot’ from central banks,” analysts at NatWest Markets wrote in a note.

“What makes me nervous about this year is that we still don’t know the full impact of the very significant monetary tightening that has taken place across the advanced world,” Berenberg senior economist Kallum Pickering said.

Central banks have expressed concern about rising wages, even as consumers have struggled to keep up with soaring living costs and companies are running out of room to protect profitability by raising their own prices.

But, Pickering said, the labor market tends to lag the broader economy for some time, meaning there is a risk that central banks could raise interest rates by more than the economy can handle.

Investors will get their first glimpse into central bank thinking later this week when the Federal Reserve publishes the minutes of its December policy meeting.

The minutes will probably show that many members saw the risk that interest rates will have to rise further, but investors are aware of how much they have already risen.

In the markets, European shares rose thanks to an upturn in classic defensive sectors, such as healthcare and food and drink. Drugmakers Novo Nordisk (NOVOb.CO), Astrazeneca (AZN.L) and Roche (ROG.S) were among the biggest positive weights on the STOXX 600 (.STOXX), along with Nestle (NESN.S)

US stock index futures rose between 0.4-0.5% , , , pointing to an optimistic start at the opening bell.

The markets have been pricing in a possible US easing for a while, but they were wrong-footed by the Bank of Japan’s shock to the ceiling for bond yields.

The BOJ is now considering raising inflation forecasts in January to show price growth close to the 2% target in fiscal years 2023 and 2024, according to the Nikkei.

Such a move at the next policy meeting on 17-18. January will only add to speculation about an end to ultra-loose policy, which has essentially served as a floor for bond yields globally.

The policy shift has strengthened the yen across the board, with the dollar losing 5% in December and the euro 2.3%.

“A theme we’ve noticed often is the euro’s negative seasonality in January, down around 1.3% since 1980 on average in January, with a hit rate of 64%. If history is any guide, it’s a difficult month for the euro- longs,” Nomura strategist Jordan Rochester said.

Oil succumbed to the strength of the dollar and reversed course, falling as concerns about demand in China, the world’s second-largest economy, added to downward momentum.

A series of surveys have shown that China’s factory activity shrank at the sharpest pace in nearly three years as COVID infections swept through production lines.

“China is entering the most dangerous weeks of the pandemic,” warned analysts at Capital Economics.