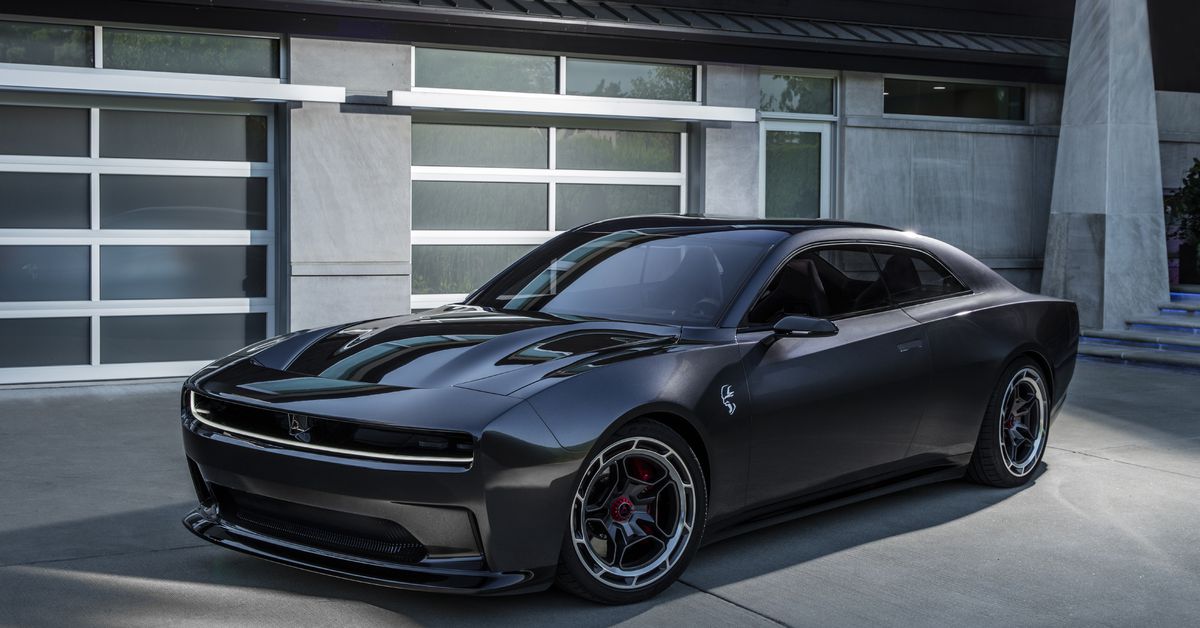 For those lamenting the imminent demise of Dodge’s gas-powered muscle cars, the automaker has a message: don’t fear the future, because it’s electric.

Dodge revealed its first electric muscle car, the Charger Daytona SRT concept, at an event this week at its Pontiac, Michigan-based headquarters. The two-door coupe is positioned as a preview of the automaker’s first EV, which is expected to go into production in 2024.

“The Dodge Charger Daytona SRT Concept exists because its performance made us do it,” Dodge CEO Tim Kuniskis said in a statement. “Dodge is all about muscle, attitude and performance, and the brand carries that chip on its shoulder into the BEV segment through a concept packed with patents, innovations and performance features that embody tomorrow̵[ads1]7;s electrified muscle.”

Before we talk about the specs, we need to address that sound. Electric cars are by nature largely silent, thanks to the absence of a combustion engine. And so much of what defines a Dodge muscle car is related to the roar of the Hemi engine. So Dodge fans would be forgiven if they thought it was a little scary if they stepped on the gas pedal of an electric muscle car and this was the sound it made.

How would you describe that sound? Ornery lion that was just neutered? Tracheostomy bobcat with voice box? The use of fake engine noise is sure to be divisive among muscle car enthusiasts. Some will love it, while others will no doubt find it leaves a lot to be desired. Dodge calls “BEV exhaust noise” (which is just a delightful oxymoron) a first of its kind. Whether it is the right noise for this particular car is still up for debate.

How would you describe that sound? Ornery lion that was just neutered?

The look of the Charger Daytona SRT concept is likely to be less divisive, straddling the line between retro and futuristic while maintaining a muscular, aerodynamic stance. Dodge said the intention is to “muscle aside” (har har) other, more boring EV concepts in favor of something more in-your-face.

There are plenty of design cues intended to harken back to Dodge’s heritage — in particular, the front end features a large opening for air to pass through, which the company calls an “R-Wing.”

The other two patent-pending features that Dodge wants to highlight have equally absurd-sounding names. The first is the “Fratzonic Chambered Exhaust,” which Dodge claims can reach 126 decibels, “making it as loud as a Hellcat-powered Dodge.” And the other is a multi-speed transmission with an electromechanical shifting experience that the automaker calls “eRupt.”

(“Fratzonic” is a reference to a logo Dodge used in the 1960s and ’70s called “Fratzog,” — a word coined by a designer. It features a split deltoid made of three arrowhead shapes forming a three-pointed star.)

The new system pushes sound through an amplifier and tuning chamber located at the back of the vehicle. Kuniskis, speaking to CNBC, compared it to a wind organ with chambers and pipes.

“We said, ‘OK, if it’s going to happen, let’s do it like Dodge,'” Kuniskis told reporters. “We’re not going to go out there and do the same thing. Dodge is going to get lost if we try to do the same as everyone else.”

But if you’re looking for more relevant specs, like range, battery capacity or charging speed, you’ll have to wait. Dodge isn’t releasing performance measurements for the concept car or the as-yet-unnamed production muscle car — yet.

The automaker revealed that the concept sits atop Dodge’s 800-volt Banshee propulsion system, which, if it makes it into the production version as expected, should allow the EV to charge at rates of up to 350 kW at a DC fast charging station. In addition, four-wheel drive will ensure that the Dodge Charger EV performs well in all conditions.

While EVs are often faster than most gas-powered vehicles thanks to “linear acceleration” that produces astounding 0-60 mph times, they often lack the driving dynamics that many performance car owners enjoy. Dodge says it is trying to address this gap through the introduction of new features, such as eRupt electromechanical shifting. This feature “delivers distinctive shift points, throwing your shoulders into the seatbacks in true Dodge style,” the company said.

Similar to Tesla with its ludicrous mode, the Dodge Charger EV will feature something called a “PowerShot push-to-pass feature.” At the push of a button on the steering wheel, the PowerShot delivers an “adrenaline rush with increased horsepower for rapid acceleration,” the company says.

In addition to electric versions of the Charger and Challenger vehicles, Dodge parent Stellantis also plans to produce electric trucks, including a battery-powered Ram 1500 that will compete with Ford’s upcoming F-150 Lightning. Dodge’s sister companies, such as Jeep, Chrysler and brands from PSA Groupe, also produce electric cars.