The case for a melt up 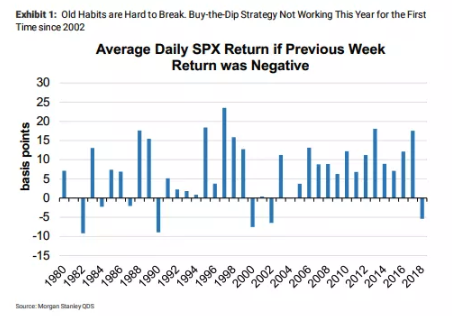 Anyone with a penchant for skepticism had a leg up in 2018, when for the first time in the long term caution was paid.

While the media has played out Morgan Stanley's Mike Wilson as the poster girl to "nail it" based on his prescient " rolling bear market "thesis", is the only analyst I realize who actually hit it right on the head last year not a stock analyst at all. It was rather Deutsche Bank's derivative strategy, Aleksandar Kocic, who, in connection with the documentation of Fed's efforts to beat the central bank "put," suggested that S & P (SPY) eventually found itself between 2300 and 2400.

Kocics Calling was not a product of any in-depth skepticism or inclination to dislike the longest bull market in recorded history. Rather, it was the natural outgrowth of his analysis of Fed's transition to the convection role manager versus convexity supplier the latter being the mode Fed operated for the whole of the postwar years until the normalization pressure came seriously.

But again, you don't have to have been really brilliant (like Kocic) to have seen smart last year. You just needed to be cautious about a scenario that found Fed pigeonholed in hawkishness and thus predicted to push financial conditions unintentionally tighter to something finally snatched.

As you may or may not be aware, SocGen has been a little skeptical about stocks for a while, and as part of the bank's calls ended up looking smarter than those derived from the street's more bullish strategies last year. It is fair to say that their skepticism has borne over to 2019, although that characterization comes with the obvious secret that there are bulls on each bank, and not all the surveys they produce are designed to create a bearish perspective.

Earlier this month, for example, the bank suggested investors should avoid the FOMO temptation. At the beginning of April note:

Our analysis shows that the risk balance remains largely related to disadvantages for risk remuneration, and we recommend that investors provide portfolio allocations for war wars between poor cyclical indicators and more political solution.

This underlines the excitement of 2019. On the one hand, a global economy that is not close to the safe forest after last year's retardation, and on the other hand, central banks are determined to "reflate" (as it were).

So far, the coordinated, deceitful pivot of politicians (who continued this week with the Riksbank to create the next turn and the Bank of Japan to increase its forward-looking guidance) combined with recent signs of stabilization in the Chinese economy ruled over the economic downturn that became proven in Europe and Asia. As bad as almost all assets (save USD "cash") performed last year, 2019 has been just as indifferent on the upside, with almost everything giving a positive return in the first quarter.

I doubt this is necessary, but just in case, here's how strong were the assets of all stripes trounced last year with cash:

And here is what Q1 brought in shape

It has generally not been a pleasant experience for those who decided to sit out on the assumption that the fourth the quarter's count was just the beginning of something worse.

] If it is you (ie if you were too shocked from December to risk hacking the carriage to Fed's bad turn in January), at least you can take comfort in the fact that you are scarce alone.

Q1 was described as a "flow-less" rally, with no figurative and literal acquisition of key investor cohorts, whose assumed participation is a key part of a bullish task. EPFR data show $ 91 billion coming out of global equity funds and $ 120 billion floating into global bond funds YTD. Here is a set of visuals from Nomura's Charlie McElligott illustrating the extent to which exposure is low and positioning lights. 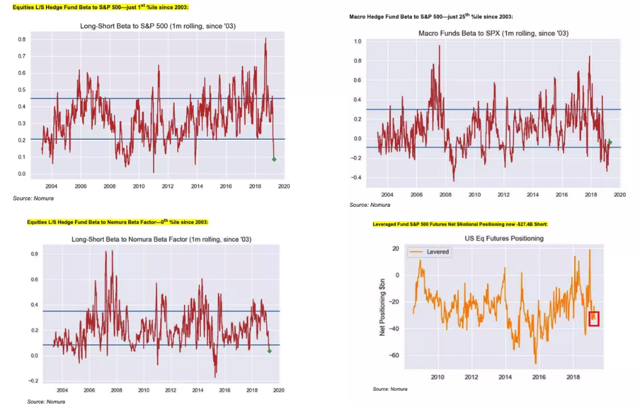 It is a feeling to ask if any of the investor groups who have not participated "should" engage, is an exercise in question-begging. Part of the core project progresses, that cohorts left in fact are "forced" into (and you can take it figuratively in the sense that FOMO gets the best of basic / discretionary investors and literally in the sense that if volatility remains suppressed and the markets remain " in-trend, systematic strategies will mechanically re-utilize).

But if the viability of the way of life builds on you (in fact, more you s, majority) participate, then it is impossible to evaluate the task.

Well, with all this in mind, SocGen is out with a brand new US stock strategy piece, and the title is "A near-term melt of 3000 is possible but moving fast."

Most points are known, but given all The "melt" protocol derived from the prospect of currents facing a corner and positioning finally bends, it is worth highlighting some of the key passages.

The SocGen reiterates the idea that while an acute lack of identity (ie lack of market depth) can make the situation worse on the way (as it did in the fourth quarter and with different other intervals last year), it can also exaggerate upward movements after a decline. I talked a lot about this in a post here last week, and one of the points I made was that buybacks that hit a liquidity environment could well explain why the decline in the first quarter was so dramatic.

"The low liquidity function of the S&P 500 futures market exacerbates bullish and bearish moves," writes SocGen, adding that if you ask the bank, "it may have [both] boosted sales by the end of 2018, but may also have supported the rally in early 2019. "

They continue to notice the obvious, which is the scarce liquidity and the repurchase will" continue to play an important role in US stock performance ".

As far as SocGen emphasizes the above-mentioned sub-positioning and deficient flow dynamics, it emphasizes the sharp deviation between large outputs from stocks and inflow to bonds. If you look at the chart in the right pane below, you can see that the situation for stocks may begin to turn around.

In addition, managed net positioning has recently moved back to (basically) neutral, suggesting that people are currently inclined to be at least marginally comfortable with the rally.

Regarding what can go "right" from here, the story is always the same. Almost all analysts you usually consult tell you that everything depends, at least to a great extent, on whether the recent bend in China's activity data turns out to be sustainable.

And with that comes a paradox.

I talked a long time on Monday about how good news about the economy has become "bad" news for Chinese stocks because the better the data, the less likely Beijing will distribute the kitchen-wash-type stimulus. Subsequently, Reuters reported that Chinese officials are completely "paused" for RRR cuts, and PBoC's move to roll out of another round of targeted long-term lending (Wednesday) clearly indicates that a cross-cutting approach is the default option going forward (in opposed to discriminatory liquidity injections).

By Friday, there was a route on the mainland. This was the third worst week for the Shanghai Composite that goes back to doldrums in early 2016, and the closest cause was the fear that better data means less stimulus.

With that in mind, consider the following from the same SocGen note: [19659035] By taking the two previous episodes of Chinese government's stimulus, in 2012 and 2015, we expect change in the US and World ex-US 12m forward EPS, several months before and after the U-turn of China's credit impulse indicator. The results are striking – global earnings expectations tend to recover after China has stimulated its economy.

As you can see, a tour of China's credit impulse is mission critical (if it is too strong, let's just say in this case, correlation probably means just as reason) for future global earnings.

The question is then, what happens in the event that China's economy only "stabilizes" at a low level, leading to a scenario where Beijing takes a kind of wait-and-see approach, continues to prevent kitchen sink stimulus for targeted measures that do not pack the same kind of stroke? If you are looking for hints on what the answer to that question might be in risk regulations, I will refer you to the chart of the Shanghai Composite above.

However, the SocGen is constructive. "Although we believe the scale of Chinese policy relief will be much smaller than in previous years – to avoid another equity bubble and shadow credit growth, stabilizing earnings expectations should be enough," the bank said.

Between the favorable acquisition, buy-back, prospect of flow and positioning, turning around and an S&P that, regardless of the SocGen, does not look particularly expensive, there is the possibility of things to run from here. On the valuation bit, the following chart shows the bank's main component analysis using the dollar, earnings growth, earnings moment, CPI, CAPE, dividend spreads, EPS and buybacks to model the index: 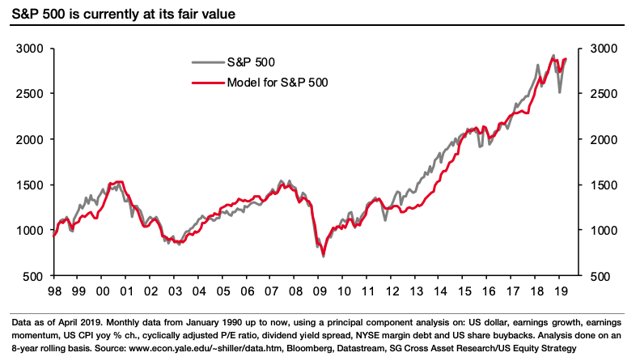 The funny thing about everything above (and I don't mean "fun" in a pejorative way) is that it feels like a lot of effort to go through to determine that S & P can "melt up" to 3000. From Friday's close we are already at 2940.

But the actual "target" is not the meaning. Rather, the point is that the debates outlined above continue to define the market narrative. To this extent, all this is an attempt to answer the question "Where are you going from?" I have no posts in any of the aforementioned shares and no plans to start any positions within the next 72 hours. I wrote this article myself, and it expresses my own opinions. I do not receive compensation for it (other than from Seeking Alpha). I have no business relationship with a company whose stock is mentioned in this article.