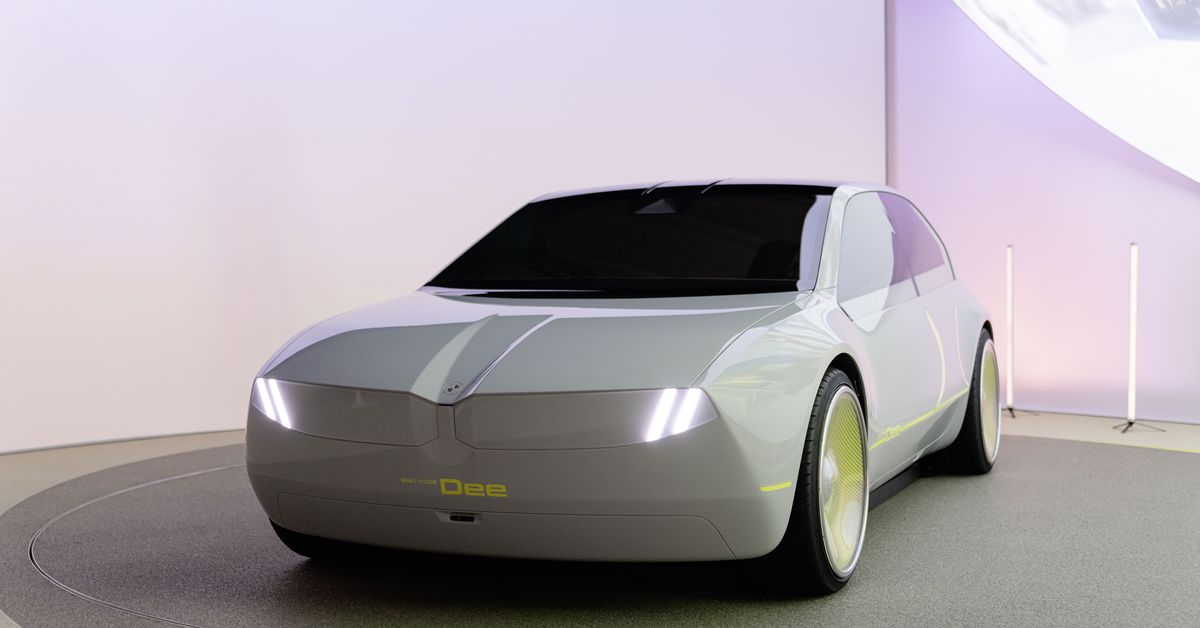 Everyone always has something to say about BMW.

The Bavarian automaker has long had a knack for setting standards with cars like the 3 Series and X5, but when vehicles change with the times, BMW superfans don’t hold their tongues.

“The old cars were better.”

“The new grill is just too much.”

“I will never pay for subscription features in a car.”

Now, at CES 2023, a new BMW concept asks: what if the car also had something to say? And if a car could talk, how would it interact with the user?

This is the BMW i Vision Dee, which stands for “Digital Emotional Experience.” It is one of BMW’s most radical – but in some ways plausible – concept cars in many years. It’s a minimalist electric performance sedan that leans hard into digital features like augmented reality and voice-powered virtual assistants. Think metaverse or Amazon Alexa, but in sports sedan form. The concept also offers the option of creating a driver avatar profile, which can even be projected onto the side window.

If a car could talk, how would it interact with the user?

More than that, in Vision Dee’s color-changing grill is like a “face” with its own expressions on top of the virtual voice. This is a BMW that talks back and may even have its own. “My dad was an E30,” is one thing the car said to me at a recent tech demo, and early social media campaigns for the concept evoked ’80s talking car action shows Knight Rider.

“The headlights and the closed BMW kidney grille are also shared phygital number (fusion of physical and digital) icon on a smooth surface, allowing the vehicle to produce different facial expressions,” the automaker said in a press release. “This means BMW i Vision Dee can talk to people while expressing moods such as joy, amazement or approval visually.”

As with the 2021 Vision Circular, the Vision Dee is just a concept car, meant to preview potentially upcoming designs and technologies that could eventually hit dealer lots. At the same time, the design itself feels like something that could preview a future electric 3 Series or i4 of some kind.

Visually, the Vision Dee looks almost like a cross between a Tesla Model 3 and one of BMW’s classic sports sedans, like a 2002 or an E30. The kidney grill sweeps over almost the entire front of the concept and a rear light bar does the same over the trunk. The white, almost featureless bodywork is a stark contrast to the fussy design of many current BMWs, while retaining distinctive features such as the ‘Hofmeister crack’ on the rear windows.

While BMW won’t directly confirm that this design is slated for production, it’s pretty safe to assume it will influence future cars. BMW’s concepts have a way of becoming reality – see the i8 supercar and i3 city car from the last decade. BMW is even calling this “another milestone on the road” to the Neue Klasse, BMW’s upcoming EV-specific car platform. This layout is named after the “new class” of sports sedans and coupes that defined BMW’s image in the 1960s and 70s.

While current BMWs tend to be built to offer a mix of combustion, hybrid or EV power – the electric i4 and ICE-powered 4 Series Gran Coupe, for example, are essentially the same vehicle – the next round of models designed from the ground up to be electric for better range and better battery packaging.

BMW says the i Vision Dee also represents a significant evolution of the E Ink color-changing technology that debuted at last year’s CES and as a result can transform the exterior into 32 different colors – and not just one color either. The concept’s body is divided into 240 E Ink segments, each of which can be controlled individually, BMW says. It’s the first time E Ink has been used on the entire exterior of a car, and BMW has said the technology could be close to consumer-level commercialization.

Refreshingly, the Vision Dee is a three-box sedan, not another blob-like crossover SUV concept. That in itself is a bold move from BMW and one that is at odds with current trends; sedan sales have been on the decline for years as the global market has shifted toward crossovers and trucks.

For BMW, it is proof that the sports sedan is still important to the company’s image and bottom line, BMW design chief Domagoj Dukec said at a preview in Germany last year.

“We want to show our customers that if the world changes, we will adapt, but we will certainly always be familiar,” Dukec said. “Everyone who works in my team, from different cultures and different generations, they love the brand and know their history. They don’t want it to go away.”

Dukec added: “It’s also BMW. When you talk about the core product… it’s the 3 and 5 series.”

Who needs screens when you have a windshield?

i Vision Dee brings good news for drivers who hate the recent explosion of touchscreens in the car: there are no screens here.

The concept’s glossy gray interior is even more minimalistic in design than the exterior, with a reduced steering wheel, seats and what BMW calls the “Mixed Reality Slider”: a touch panel that controls how much information the driver sees. on the advanced heads-up display.

It’s also bad news for drivers who hate screens: the entire windshield is now essentially a screen, mixing the functions of a dashboard with an infotainment system and adding augmented reality features.

Using the windshield to host displays is nothing new; many modern cars project vehicle speeds, navigation and other data there (and have in various forms since the 1980s). But this concept takes that idea to a whole new level.

Images projected on the screen include social media posts and AR displays as well as vehicle diagnostics. The other windows can also be dimmed if drivers and passengers want to go into full VR mode. Will this create a giant distraction? Maybe, but BMW says it’s safer than taking your eyes completely off the road to look at a dashboard-mounted display.

“Projection across the entire width of the windscreen allows information to be displayed on the largest possible surface – which only becomes recognizable as a screen when activated,” BMW said in a statement. “[The car] visualizes how an advanced Head-Up-Display can also be used in the future for the display and operating concept.”

A version of this system, presumably a reduced one, will debut on the Neue Klasse cars starting in 2025.

“An intelligent companion,” not just a car

But while many of the features previewed in the Vision Dee certainly won’t be ready for primetime in 2023, they feel like a believable approximation of where the increasingly digitally focused automotive industry is headed.

The entire windshield is now essentially a screen

“With the BMW i Vision Dee, we show what is possible when hardware and software merge. In this way, we are able to exploit the full potential of digitization to transform the car into an intelligent companion,” said Oliver Zipse, BMW’s chairman, in a statement.

It’s cold comfort for die-hards who want BMW to go back to the way things used to be – however they choose to perceive that. Nor will it do for critics of the technologies found in the Vision Dee. After all, Amazon Alexa did little more than set billions of dollars on fire in 2022, and Facebook CEO Mark Zuckerberg’s decision to pivot to the metaverse has been met with outright derision. The question remains whether drivers will even want any of the features on in the Vision Dee, particularly the sweeping screens above the windscreen or the talking virtual assistant.

Although it struggles with things like getting drivers to accept subscription features in cars, BMW says yes. The future isn’t going to be high-revving inline-six engines and manual transmissions, so BMW needs to find a way to convince the die-hard faithful that “performance” can be defined by things like software speed, charging time and electric range. The cars it produces over the next few years probably won’t be as wildly ambitious as the Vision Dee, but it shows that BMW is already thinking in that direction.