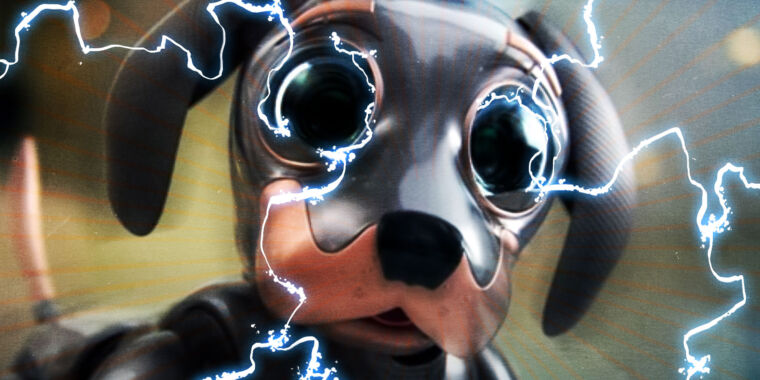 For some people — mostly those who aren’t football fans — the commercials that accompany the Super Bowl are as important as the game itself. In 2022, we got a conflicting vision of the future — almost all the automakers showed off new electric vehicles as they try to wean themselves off dirty fossil fuels, a move surely counteracted by all the energy-sucking crypto startups also shilling their wares with on -screen QR codes between downs.

What follows is one automotive editor̵[ads1]7;s ranking of the various Super Bowl LVI car commercials.

First place goes to Kia for its Robo Dog commercial that advertises the new Kia EV6 electric crossover. It’s a heartwarming story of a robot dachshund that goes on an adventure chasing an EV6, with a little demonstration of that car’s vehicle-to-load function that allows its giant battery to power AC devices, all set to Bonnie Tyler’s best hair-rock.

We drove the EV6 last month, and it was extremely impressive, with good vehicle dynamics, great efficiency, and 18-minute DC fast-charging times.

Second place belongs to BMW, which must have needed a big money wallet to pay for both Salma Hayek and Arnold Schwarzenegger. They play Hera and Zeus, the Greek gods. They’ve now retired and live in Palm Springs, and they drive an iX, BMW’s new flagship electric SUV.

The actual commercial itself was not quite as charming as Kia’s, and the iX was beaten in our 2021 top cars of the year list by the EV6’s close sibling (the Hyundai Ioniq 5), which is why I’m only awarding BMW second place . But the ad makers do deserve credit for filming the iX from its best angles.

Polestar takes the final podium position with its “No Compromises” ad. Unlike most of the rest of the automotive Super Bowl ads, this eschewed big-name actors and even a color palette. Instead, stark black-and-white visuals and a Hans Zimmer-like score promote the Polestar 2 EV, promising “no compromises, no epic voice-overs, no punchlines, no Dieselgate, no dirty secrets, and no conquering Mars, among others things.

Hyundai’s Ioniq 5 beat the BMW iX in the roundup of the best new cars we drove last year, but I’m only awarding Hyundai’s Ioniq 5 commercial fourth place, because it just was not as catchy to me. (This is a very unscientific ranking, sorry.)

But the Ioniq 5 is a spectacularly good EV. It shares its technology with the EV6, so that means great efficiency and very fast charging. It’s not quite as much of a peach to drive as the Kia, but it’s slightly roomier inside, and the 16-bit styling pushes all the right buttons if you’re a GenXer like me.

General Motors gave us Dr. EV-iL, a sequel of sorts to the Austin Powers franchise that sees Mike Myers reprise his famous not-a-Bond-villain. He’s joined by Seth Green, Rob Lowe, and Mindy Sterling, and they realize that if they want to take over the world, first they have to save it from climate change. So they drive some of GM’s forthcoming new EVs, the Hummer EV, a Chevrolet Silverado EV, and a Cadillac Lyric.

Porsche also crossed over into a well-known film franchise with its Super Bowl ad—Top Gun, the sequel to which finally airs in theaters this coming May. Unlike some of the other celebrity-starring commercials, Tom Cruise only appears here in clips from the upcoming one Top Gun: Maverickinterspersed with footage of some of Porsche’s creations, from an old 911 to its Mission R electric race car concept.

Despite GM’s Dr. EV-il ad, Chevrolet also booked its own time during the Super Bowl. Fans of The Sopranos no doubt pricked their ears instantly at the sound of Alabama 3’s “Woke Up This Morning.” Sadly for those fans, this did not herald a new series of the Mafia drama, but it did feature Jamie-Lynn Sigler, who played Meadow Soprano. I deducted points from this entry because the Silverado EV that Meadow drives looks like it’s a CGI render, not a real vehicle.

Toyota leaned in to a “keeping up with the Joneses” theme for 2022’s Super Bowl. Tommy Lee Jones, Rashida Jones, and Leslie Jones all star, alongside Nick Jonas (kind of a Jones?), All driving Toyota’s new Tundra pickup truck. Unlike the Silverado EV, the Tundra is on sale now, and while it is not an EV, it is at least a hybrid.