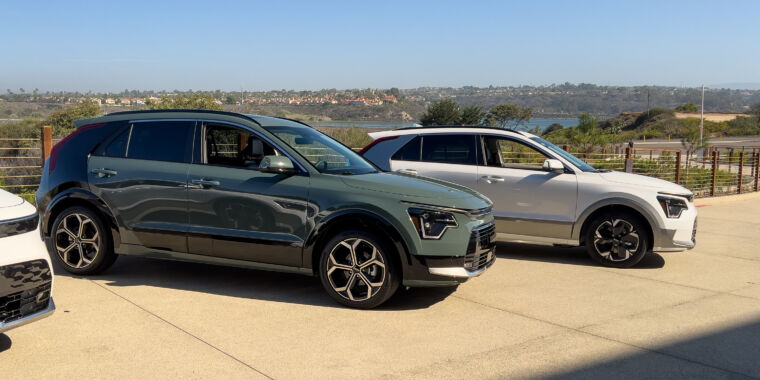 LEUCADIA, Calif. – The Kia Niro is no flashy car. It does not have a strange origin story like its stablemate, the “pig with a rucksack”[ads1];. There are no sporty pretensions or design to explore Moab off the grid. Instead, it’s just been an affordable family crossover, quietly going about its way as efficiently as possible, with hybrid, plug-in hybrid and battery-electric vehicle versions.

The Niro fills the lower end of Kia’s electrified lineup in the US, and for the 2023 model year, a new second-generation Niro is on sale. As before, there are hybrid, plug-in hybrid and BEV versions available, and they’ve actually even gotten a bit cheaper, at least when you factor in four years of inflation.

Kia’s design team always give their work interesting names, and the Niro’s design philosophy is called “Joy for Reason”. But if you didn’t find the first Niro Offensive, you probably won’t with the new one. Perhaps the most notable feature is the contrasting section that runs behind the rear door along the D-pillar. It’s not just for looks – there’s a functional aero blade that controls airflow at the rear of the car to minimize drag and increase efficiency, and it can be body colored if you prefer.

The cheapest Niro is the one with the smallest battery – the “regular” hybrid version. This starts at $26,490 for the Niro LX, but you can spend as much as $34,790 on a Niro SX Touring with all the bells and whistles.

When fitted with the smallest wheels – in this case, 16-inch items – the Niro hybrid is at its most efficient, achieving an EPA rating of 53 mpg (4.44 l/100 km), making it the one of the most efficient non-plug-in cars from any car manufacturer. Opt for the Touring Package, which increases the wheel size to 18 inches, and that drops to 49 mpg (4.8 L/100 km), a simple demonstration of the effect larger wheels have on drag and efficiency.

It’s even able to detect the presence of things like residential areas, school zones and hospitals (via GPS data) and will switch to EV mode at low speed to minimize the amount of air pollution it emits around potentially vulnerable people.

Kia has simplified its plug-in hybrid Niro offerings for 2023, dropping the more minimalist LX, giving you a choice of either the Niro PHEV EX ($33,740) or the Niro PHEV SX Touring ($39,490). The most notable specification change to the new Niro PHEV is a slightly larger traction battery capacity – now up 2.2kWh to 11.1kWh. That corresponds to an all-electric range of 53 km, a bump of 25 percent on the old car.