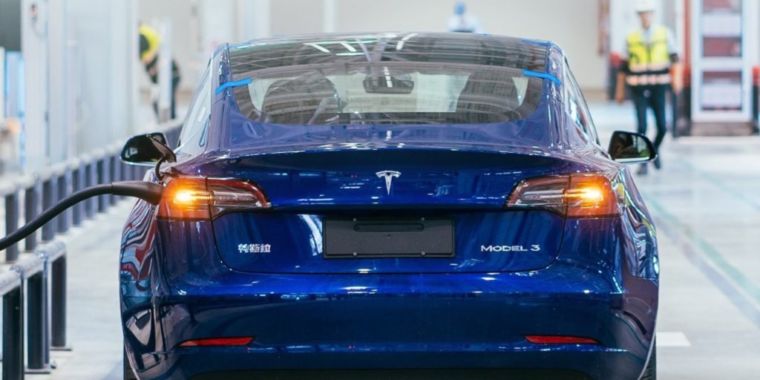 Tesla is known for lack of deadlines, but the company's Shanghai plant, called Gigafactory 3, appears to be on schedule. Tesla broke ground at the facility in January. Now media reports show that the work is almost done, and the company is weeks away from starting large-scale production.

According to Bloomberg, Tesla Chairman Robyn Denholm said last week that Tesla is awaiting factory certification from local authorities. The company hopes that this will happen before the end of the year.

Tesla recently published photos of some of the first Chinese-made Model 3s on Weibo, a Chinese social media platform similar to Twitter. Tesla allowed Chinese reporters to take additional pictures of the vehicle. There are a couple of obvious differences from the American model.

The back of the car has Chinese characters on the left and "Model 3" on the right. Like the cars Tesla currently ships to China, these new Model 3's also have dual charging ports. One port is for European type 2 charging standard, while the other is for a Chinese charging standard.

Tesla will initially use Panasonic batteries in its Chinese-made cars, just like in the United States. Bloomberg recently reported that Tesla is negotiating an agreement to start using batteries from Chinese battery manufacturer CATL as of next year.

Tesla aims to produce at least 1,000 cars per week at its Chinese factory by the end of the year. It can help Tesla achieve its overall goal of delivering at least 360,000 vehicles for the calendar year.