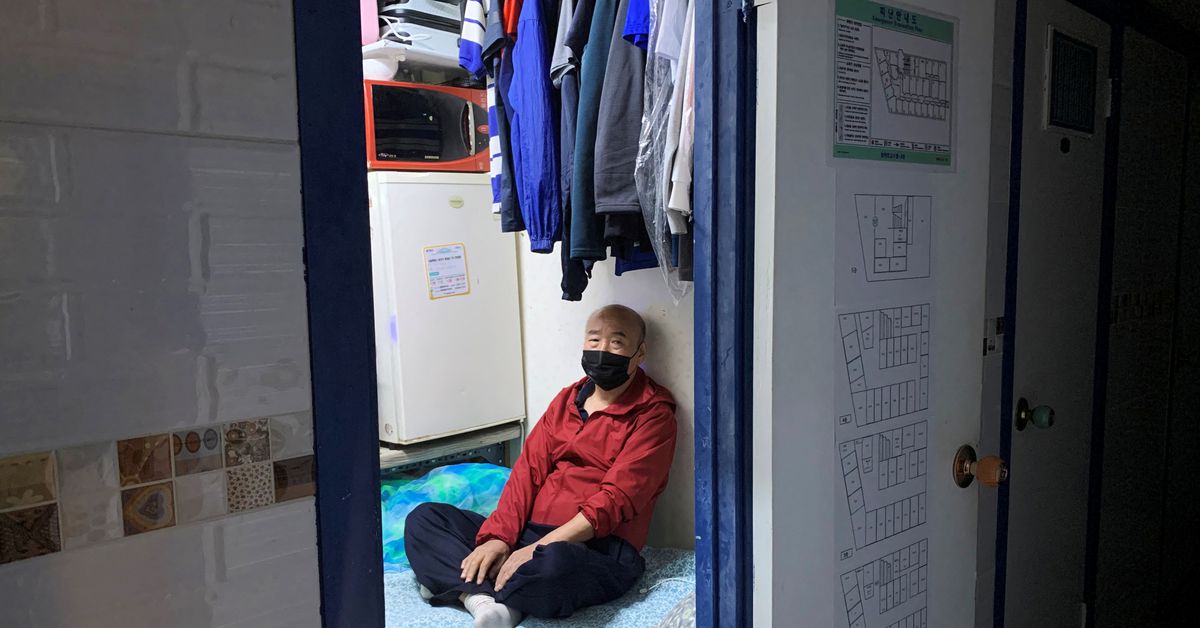 The prosecutor has charged the driver with negligent homicide. He blames Tesla.

Choi Woan-jong, who had made a living driving drunk people home in his own cars, says the Model X went out of control on its own and the brakes failed in the December 2020 crash.

The criminal trial set to begin in South Korea hinges on questions about the safety of Tesla cars, at a time when the electric car maker faces a series of lawsuits and increased scrutiny from regulators.

Choi, 61, is now unable to find work as an independent driver, or what is known in Korea as a “replacement driver”.

He says he is suffering from flashbacks and depression ahead of a trial that pits his credibility against the world’s most valuable carmaker.

“When I wake up, I feel abandoned, floating alone in the middle of the ocean,” said Choi, who underwent surgery after the crash for a ruptured intestine.

Tesla did not respond to written requests for comment about the crash and Choi’s case. A lawyer for the family of Yoon Hong-geun, who owned the car and died in the crash, declined to comment.

Choi’s case has drawn the attention of some security lawyers in South Korea who want to change a provision in the free trade agreement with the United States that exempts Tesla from local standards.

For example, Tesla is not required to comply with South Korean regulations that require at least one front and rear door to have a mechanical failsafe, because the US-South Korea Free Trade Agreement exempts automakers with sales of less than 50,000 vehicles from local safety regulations.

Park Keun-oh, an official from the Korea-US FTA department of South Korea’s trade ministry, said the exemption clause requires Tesla to comply with US safety regulations, which do not require a mechanical safety lock. Such locks enable doors to be opened even if the car has no electricity.

Park declined to comment further. The office of the US Trade Representative did not respond to requests for comment on the trade agreement or the regulations.

Prosecutors say Choi hit the gas pedal as he entered the garage of a Seoul apartment building, hitting 95 km/h (60 mph) before crashing. He denies it, saying the car’s wing mirrors began to fold in and out without command just before the car accelerated on its own.

“It felt like the car was being swept away by a hurricane,” said Choi, who said he had been driving for more than 20 years and had experience driving Teslas.

The automaker gave prosecutors data from the Model X that the car transmitted in the moments before the crash, the judge said during a preliminary hearing. The defense team has asked to see the data and is waiting for the court to release it.

Choi and his lawyer are trying to show that the car’s electrical systems failed and that its design slowed firefighters’ efforts to save Yoon.

Choi escaped through a broken window on his side. Firefighters were delayed in pulling Yoon out of the back seat because the Model X’s electronic doors failed to open from the outside, according to a Dec. 31, 2020, fire department report reviewed by Reuters. The report does not say how long the rescue was delayed.

Yoon, 60, was pronounced dead after firefighters took him out of the car and performed CPR. The cause of death was not made public.

Judge Park Won-gyu said he plans to call Tesla engineers to testify and that the safety of Tesla vehicles will be examined during the trial. Involuntary manslaughter carries a potential prison sentence of up to five years.

[1/4] Choi Woan-jong poses for photographs during an interview with Reuters in his cubicle, called a goshi-won, in Seoul, South Korea, October 19, 2022 REUTERS/Ju-min Park

The investigation by the responding fire station found the battery failure slowed the emergency response by disabling the seat controls, preventing firefighters from repositioning the front seats to get to Yoon, according to the fire department’s report.

The power cut made it “impossible to secure space for the (rescue) operation”, the report states.

The report says exterior door handles on the Model X, which are electronic, did not open from the outside when the battery burned. It also says firefighters couldn’t pull Yoon from the car because they couldn’t move the front seats after the battery died.

A video of the rescue shows firefighters trying but failing to open the Model X’s wing strut doors. They eventually broke through the windshield and pulled Yoon from the car about 25 minutes after the 911 call came in, according to the footage and the fire department’s report.

Tesla is the only automaker that does not provide data to the Korea Transportation Safety Authority (TS) from on-board diagnostic systems for safety checks in South Korea, according to the agency and Park Sang-hyuk, a lawmaker from the opposition Democratic Party of Korea who, spurred by Choi’s crash, has campaigned for regulators to pressure Tesla to change door handles and cooperate with regulators.

TS noted that Tesla is not required by law to provide such data, but that all other foreign and domestic car manufacturers do.

Park and TS said Tesla is working with the agency to give Korean owners access to their car’s diagnostic data starting in October 2023.

“Tesla has become something of an icon for great innovation, but I think (the company’s problems in Korea) also raise a serious concern for customers here,” Park said, referring to cases where Tesla’s doors won’t open after a collision and free trade agreement provisions .

A South Korean consumer group, Citizens United for Consumer Sovereignty, said in September that Tesla had not fixed what the group calls “door bugs.” The group says it has collected information on about 1,870 complaints involving Tesla doors over the past four years. Data provided to Reuters by another South Korean lawmaker, and the TS, confirmed this figure.

The consumer group said it asked police to investigate Tesla for failing to improve driver and passenger safety after the fatal crash in Seoul, but that police told them in May there was not enough evidence to proceed, according to their report, seen by Reuters.

In a June 29 letter to the consumer group, seen by Reuters, police say that while Tesla’s door locks may violate local safety standards, that consideration was trumped by the terms of the Korea-US free trade agreement.

Tesla doors “may be in violation of the (local) regulations, but it (Tesla) has no obligations to comply with local motor vehicle safety standards in accordance with the Korea-US Free Trade Agreement,” the police letter said.

In South Korean courts, drivers in cases where the cause of a crash is disputed face the burden of proving the car had a defect, three legal and auto safety experts say, and vehicle manufacturers are almost never prosecuted for safety issues.

“Unless you’ve been through this, you’ll never know what it feels like,” said Ahn Ho-joon, another “substitute driver” in South Korea, who had a Tesla crash in May almost identical to Choi’s, police documents show .

Ahn, one of the few to attend all of Choi’s pre-trial hearings, says the Tesla he was driving also accelerated on its own and crashed into two vehicles in an underground garage, but there were no serious injuries. Police say the accident was his fault because there were no problems with the vehicle, but did not charge him because the wreck was minor.

Ahn said he has kept his job as an independent substitute driver, but refuses to drive Teslas.

Choi, disabled and almost penniless, has moved into a 6.6-square-meter (71-square-foot) cubicle he rents for 350,000 won ($243) a month. Funded by government housing grants, it includes a shared bathroom and kitchen, and all the rice he can eat. Despite these difficulties, Choi is eyeing Tesla.

“Obviously there’s a process of making the products perfect through trial and error. And I’m just destined to be a part of that process,” he said.