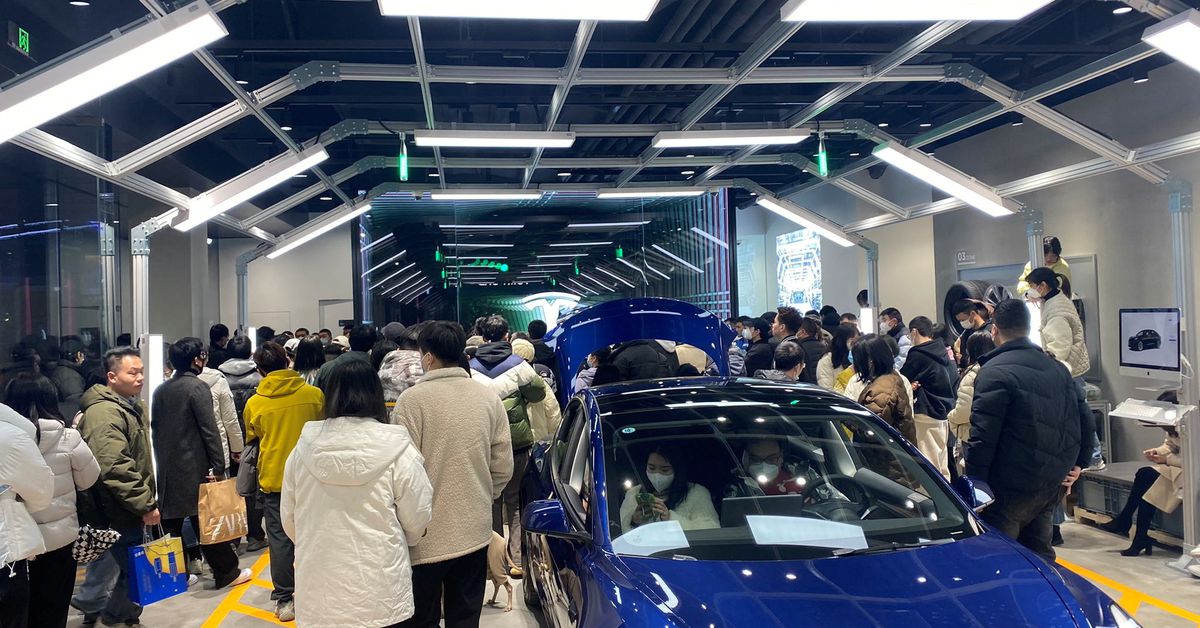 SHANGHAI, Jan 7 (Reuters) – Hundreds of Tesla ( TSLA.O ) owners rallied at the carmaker’s showrooms and distribution centers in China over the weekend, demanding rebates and credit after sudden price cuts they said meant they had overpaid for electric cars they bought. Previously.

On Saturday, around 200 recent buyers of the Tesla Model Y and Model 3 gathered at a Tesla delivery center in Shanghai to protest the US carmaker̵[ads1]7;s decision to cut prices for the second time in three months on Friday.

Many said they had thought the prices Tesla charged for its cars late last year would not be cut as sharply or as deeply as the automaker just announced in a move to boost sales and support production at its Shanghai factory. The planned expiry of a government subsidy at the end of 2022 also prompted many to complete their purchases.

After Friday’s surprise discounts, Tesla’s electric car prices in China are now between 13% and 24% below September levels.

Analysts have said Tesla’s move is likely to boost sales, which fell in December, and force other electric car makers to cut prices also at a time of faltering demand in the world’s biggest market for battery-powered cars.

While incumbent automakers often discount to manage inventory and keep factories running when demand weakens, Tesla operates without dealers, and transparent pricing has been part of its brand image.

“It may be a normal business practice, but this is not how a responsible enterprise should behave,” said a Tesla owner who protested at the company’s delivery center in Shanghai’s Minhang suburb on Saturday, who gave his surname as Zhang.

He and the other Tesla owners, who said they had taken delivery in the final months of 2022, said they were frustrated by the abrupt price cut Friday and Tesla’s lack of an explanation to recent buyers.

Zhang said police arranged a meeting between Tesla employees and the assembled owners where the owners presented a list of demands, including an apology and compensation or other credits. He added that Tesla employees had agreed to respond by Tuesday.

About a dozen police officers could be seen during the demonstration in Shanghai, and most of the videos from the other demonstrations also showed a large police presence at the Tesla facilities.

Protests are not a rare occurrence in China, which over the years has seen people come out in large numbers over issues such as financial or real estate fraud, but authorities have been on heightened alert following widespread protests in Chinese cities and top universities in late November against the COVID- 19 restrictions.

‘GET YOUR MONEY BACK’

Other videos appearing to be of Tesla owners protesting were also posted on Chinese social media platforms on Saturday.

A video, which Reuters confirmed was filmed at a Tesla store in the southwestern city of Chengdu, showed a crowd chanting: “Return the money, refund our cars.”

Another, which appeared to be filmed in Beijing, showed police cars arriving to disperse crowds outside a Tesla store.

Reuters was unable to confirm the content of any of the videos.

Tesla does not plan to compensate buyers who took delivery before the latest price cut, a Tesla China spokesman told Reuters on Saturday.

He did not respond when asked to comment on the protests.

China accounted for about a third of Tesla’s global sales in 2021, and the Shanghai factory, which employs about 20,000 workers, is its most productive and profitable single factory.

Analysts have been positive about the potential for Tesla’s price cuts to drive sales growth at a time when it is a year away from announcing its next new vehicle, the Cybertruck.

“Nowhere else in the world does Tesla face the kind of competition it has here [in China],” said Bill Russo, head of consultancy Automobility Ltd in Shanghai.

“They’re in a much larger EV market with companies that can price more aggressively than they can, until now.”

In 2021, Tesla faced a PR storm after a disgruntled customer climbed onto a car at the Shanghai Auto Show to protest the company’s handling of her complaints about the car’s brakes.

Tesla responded by apologizing to Chinese consumers for not addressing the complaints in time.