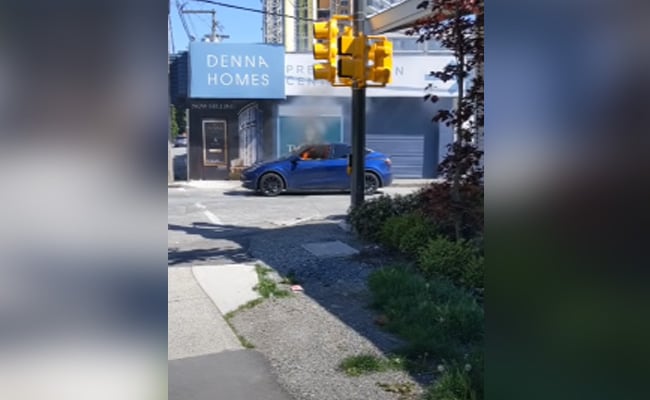 It took the fire crews about five minutes to extinguish the flames completely. n

A Tesla owner in Canada says he was driving a 2021 Model Y on Friday when the car alerted him to a fault, turned it off, locked the doors with him inside and began pouring thick smoke from the air vents.

To get out of the vehicle, the owner had no choice but to smash the car window.

The owner, Jamil Jutha, was on his way to a golf course in North Vancouver, British Columbia, when the accident happened, according to Driving, a Toronto-based online car magazine.

A witness recorded the incident and shared a video of it on YouTube.

It took the fire crews about five minutes to extinguish the flames completely.

Here is the video of the incident:

“The doors would not open,”[ads1]; Jutha told CTV News, a Canadian news organization. He added that the windows refused to go down. “Of course there will always be panic in a moment when you feel trapped. I kicked through the window, climbed out and called 911 right away,” says Jutha.

Mr Jutha bought the vehicle just eight months ago, according to Electrek, a website that covers stories about the electric car market.

Although electronic triggers are the primary means of operating the doors of a Tesla vehicle, they do not work in the event of a power failure. Each door also has a manual release in normal view.

The Electrek report added that it is often a problem for people unfamiliar with the car since they use the manual shutter instead of the electronic shutter, which allows the windows of the frameless door to go down before the door can be pushed up, which ensures a safer opening. .