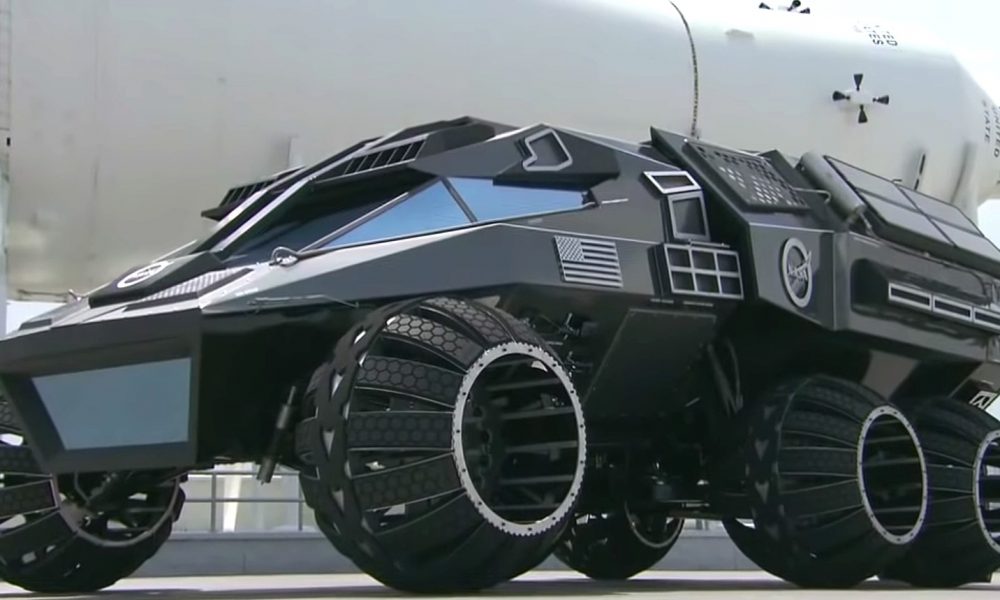 Elon Musk's "Blade Runner" Cybertruck may be just a few days away from being unveiled to the world, but the vehicle, from its final specifications and design, remains a mystery. The CEO of Tesla has stated that the vehicle will not look like a traditional pickup, and this is confirmed by teasers from the company and smart Easter eggs hidden in the invitation to the CYBRTRK event and the vehicle's stylized logo.

Considering that Musk has stated that Tesla Cybertruck will look like an Armored Personnel (APC) of the future, it's hard not to see the potential similarities between the vehicle and NASA's Mars Concept Rover, unveiled in 2017. NASA's The Mars Rover concept is very similar to an APC from the future, and it looks very tough. It's massive at 28 feet long, the ground clearance is no joke, and its modular structure allows it to perform a variety of tasks on the harsh Red Planet environment.

Tesla's CYBRTRK appears to have some design signals that may very well be similar to NASA's Mars Rover Concept. Tesla's Easter Egg shows Cybertruck with a smooth sloping hood, high ground clearance and an APV-like silhouette. The similarities between the two vehicles' design (at least based on what Tesla's Easter eggs have so far shown) are so remarkable that one cannot be blamed for speculating that CYBRTRK can be used by Elon Musk's companies, not just as a disruptive pickup on earth; It can also be used as the basis for a potential SpaceX Mars Rover.

This sounds a lot like a statement from a sci-fi novel, but given Musk's habit of making it unorthodox and unreliable, a dual purpose heavy vehicle might actually make sense. Musk probably prefers to have as much overlap between Tesla and SpaceX's technologies, after all. Last September, Musk stated that Teslas has the potential to work on other planets. “Well, actually Tesla's going to work on Mars. You can only drive them, pretty much, because electric cars don't need oxygen, they don't need air. So you can just drive them around, no problem, ”Musk said during SpaceX's Starship Q&A session. That being said, creating a manned Mars Rover from CYBRTRK's platform would be incredibly challenging. For a Mars Rover project, SpaceX and Tesla will most likely focus on making the vehicle as light as possible. This is because Rover is part of a payload that is sent to space. Payloads are very expensive, and therefore CYBRTRK equipment useful on Earth will probably not be relevant to a vehicle designed for Mars. Performance is also quite irrelevant in a manned rover. If Tesla were to design a manned Cybertruck Mars rover, it would have to make huge modifications to the car itself, from the battery cooling systems to the equipment.

Of course, this would be quite a challenging effort from both Tesla and SpaceX. After all, the difficulty of creating a vehicle that can cross a foreign planet from the platform to an earth-based truck is no joke. Things get a little easier if SpaceX ends up using the CYBRTRK platform to create an unmanned Mars Rover.

Tesla has a lot of experience with autonomous driving, and this could play very well to his advantage if Elon Musk's private aerospace company decides to deploy unmanned rover to explore Red Planet. With this concept in mind, a tough, lightweight vehicle loaded to the teeth with technology and based on the CYBRTRK platform can make sense. Tesla and SpaceX will still have to overcome enormous challenges in creating a landscapable land car from a pickup platform, but there is no denying that the electric car manufacturer's expertise in designing and making EVs can very well make a reasonable and reliable unmanned Mars Rover feasible.

Given that these ideas may sound unlikely, it should be noted that a Mars Rover project between Tesla and SpaceX is unlikely to strain any of the companies. The number of rover needed for the first years of a Mars mission, manned or unmanned, is likely to be very small, perhaps an order of magnitude smaller than the rollout of the original Tesla Roadster. Thus, both companies could innovate to the limit based on the CYBRTRK platform, and there would be no difficulties at all. The size of a CYBRTRK-based rover may not even be one, provided SpaceX's Starship rollout goes smoothly.

Tesla deserves much of the credit for keeping CYBRTRK secret until today. Considering its futuristic clues and Elon Musk's good references that the vehicle is a truck worth a sci-fi set, the pickup may very well be the machine that bridges Tesla and SpaceX, at least to some extent. Although the only parts of the Cybertruck that can be used for a Mars Rover are chassis and driveline, such an overlap will still be incredibly useful. Such ideas are crazy, but they can also be classic Elon Musk.