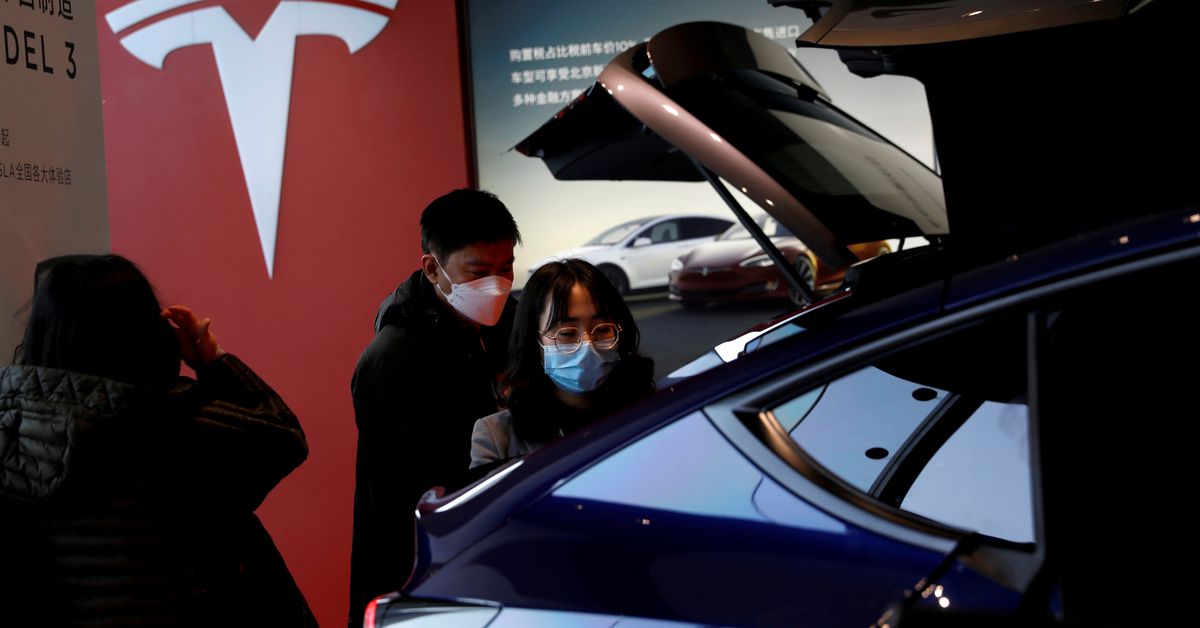 SHANGHAI, Oct 24 (Reuters) – Tesla ( TSLA.O ) has cut starting prices for its Model 3 and Model Y cars by as much as 9% in China, reversing an industry-wide trend of increases amid signs on softer demand in the world’s largest car market.

The price cuts, published in listings on the electric car giant̵[ads1]7;s China website on Monday, are Tesla’s first in China in 2022 and come after Tesla began offering limited incentives to buyers who opted for Tesla’s insurance last month.

The price cuts come after Tesla CEO Elon Musk said last week that “sort of a recession” was underway in China and Europe, and Tesla said it would miss its vehicle delivery target this year.

Musk told analysts last week that demand was strong in the current quarter and said he expected Tesla to be “recession-resistant.”

“The price cuts underscore the possible price war that we have been emphasizing since August,” said Shi Ji, an analyst at CMBI.

Data on Monday showed retail sales in China grew 2.5% in September, below expectations for growth of 3.3% and less than half of August’s 5.4% growth.

Analysts are warning of a growing glut of car inventories in China, where car sales growth slowed in September while sales of electric cars rose at their slowest pace in five months. read more

The US carmaker and several Chinese rivals have raised prices several times since last year due to rising raw material costs. But Tesla has also regularly adjusted the prices of its cars in China, including reductions, which reflect government subsidies.

Tesla told Reuters it is adjusting prices in line with costs. Capacity utilization at the Shanghai Gigafactory has improved, while the supply chain remains stable despite the impact on the economy of China’s strict zero-Covid restrictions, leading to lower costs, it said.

The average price for a new Tesla in the United States, the electric car manufacturer’s largest market, has risen steadily since last year and was just under $70,000 in August, according to research firm Kelley Blue Book.

Tesla upgraded its Shanghai factory earlier this year in a development that brought the factory’s weekly production capacity to around 22,000 units compared with levels of around 17,000 in June, Reuters previously reported.

Tesla delivered 83,135 Chinese-made electric cars in September, up 8% from August, setting a production record for the Shanghai factory since production began in December 2019. read more

CMBI analysts warned last week that 2023 would bring more competition to the electric car sector, saying it expected to see sales growth for electric and hybrid cars on an aggregate basis to fall below 50%. read more

Tesla is currently China’s third best-selling electric car maker after BYD Motor (002594.SZ) and SAIC-GM-Wuling (GM.N)(600104.SS), and is the only foreign player on the top 15 list published by the China Passenger Car Association.

CMBI said it expected other automakers would need to cut prices on battery electric and plug-in hybrid vehicles, following Tesla’s lead due to a projected increase in production capacity next year.