It took three business days from when the United States effectively blacklisted Huawei for the Trump administration to offer a concession in the form of a temporary general license that allows some transactions with the company and its dozens of non-US subsidiaries.

Until August 19, Huawei is allowed to purchase US merchandise necessary to ensure that existing networks remain in operation and to update software on existing Huawei devices.

The decision came on Monday night after what I described on my side as a "mini-panic" across the global technology source. Last week, in a post for this platform, I suggested that the Huawei gamble was some of a "crossed Rubicon" moment for markets. In that post, I flagged SOX (SOXX), which on Friday was on its way to its second worst month since May 201

2. At the closing watch on Monday, semi-shares were on their way to their worst month since the crisis.

You didn't have to be any kind of seer to know that any way to intervene from the US Commerce Department was in the cards . Monday was not a particularly bad day for global stocks at all, but the routine of the semis was disturbing to what it telegraphed about how the market interpreted the Huawei decision. Literally minutes before the temporary general license confirmation was posted on the Commerce website, I said the following in a short post called "When the Chips Down":

Presumably, the Commerce Department will be forced to adopt a sort of intermediary that improves the market. worries and helps breathe the battle. Otherwise, this will quickly destroy the trust. Given that the weakness of the chip class is a sign of an actual bid from the reality of dismantling the global technology source, it is difficult to imagine how this does not spread and ask a liner at some point in the very near future, unless The Trump administration comes up with something that is definitely about how they plan to reduce the decline from last week's decision.

If you looked across the headlines Tuesday night, most finance companies attributed Wall Street their good day to the temporary, partial statement given to Huawei. SOX collected more than 2%, and SPDR S & P Semiconductor ETF (XSD) consisted of S & P ETF (SPY) after three consecutive days of severe underperformance. The yellow dotted lines in the following visuals mark the day when the Huawei ban was announced.

To be clear, a 90-day partial postponement by Wilbur Ross will not cut it when it comes to restoring confidence and convincing market participants that the United States fully appreciates the level of this situation. You may think the route in the track is over, but the reality is that no one knows where this is going. "We expect many, if not most, semiconductors will need to reduce estimates," wrote Raymond James on Tuesday, in a note called by Bloomberg for a piece that was eligible for "US Chipmakers Preparing for China Trade Fight Fear," as everyone wants "likes & # 39; & # 39 ;.

Beyond the ramifications for semis, investors should go back and try to appreciate the big picture. I have tried to communicate why the Huawei story is so important in at least half a dozen posts over the last four days in addition to the two that are linked. This is China's crown jewel on the line. Huawei is the Beijing National Master. Although the rhetoric of Chinese state media was already quite sharp after the Trump administration moved to more than doubled the $ 200 billion tariff in Chinese goods, the tone was obviously hostile after the Huawei decision. In remarks mentioned by a widely read piece in the South China Morning Post, Xi appeared on Tuesday to suggest that China is preparing for an indefinite war on wear.

Also on Tuesday, Bloomberg said the Trump administration "for several months" kept punishing Huawei for fear of undermining trade negotiations. It may sound like an innocent headline, but it's not. Since the arrest of Meng Wanzhou in December, US dealers have been suffering from insisting that trade negotiations be separated from national security issues. Implicit in that insistence was a promise that Huawei and Meng would not be used as influence. The Bloomberg story (which cited non-named sources) suggests that the United States always intended to play Huawei ess in case the terms of a potential trade deal were not considered favorable enough for Washington.

Importantly, some of China's latest stimulus efforts have been introverted, apparently designed to boost domestic demand rather than save the global cycle. It may be due to concerns that the monetary policy channel is obstructed by lack of credit demand, or it may just be that Beijing is taking a "China first" approach this time in terms of stimulus. Whatever it may be attributable to, it is reasonable to assume that in an all-out trade war scenario, the tendency to focus inward will be renamed. Consider this from Barclays:

China's stimulus has failed to increase exports from trading partners such as Korea and Taiwan, which means that China's stimulus is domestic-oriented, and that the improvement in construction investment is driven by real estate / infrastructure at the expense of production. This increases the impact of the policy measures domestically and limits the amount of implementation of this stimulus to the rest of the world. Therefore, we see risks for a prolonged and soggier soft patch in the global economic recovery compared to 2016.

When you turn into the fact that April activity and credit default data missed estimates, you're left with some worrying concerns about the prospects in a US environment puts the screws as tight as they want to go.

With that in mind, remember that in the best part of a decade, China has been the engine of global growth and credit creation. There is a point that has been emphasized and reemphasized by analysts since 2015, when the devaluation of the yuan rattle markets and China's concerns was top notch.

"After the global financial crisis, Washington had too many issues to focus on China, plus the Chinese was the driving force behind global GDP and debt creation after 2008 in a world that is hungry for growth," writes Bank of America in a note dated Monday, and adds that "European sovereign debt crises in 2011 and 2012 made Chinese economic activity even more important pillar in the world economy." 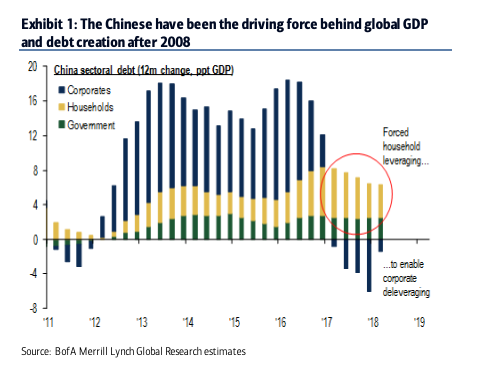 The recovery from the crisis has been lukewarm, and although 2017 was characterized by synchronous global growth, "gangbusters" are not a term that you will hear someone use to describe the pace of economic expansion in developed economies. It will probably never be an "ideal" time to confront Beijing on trade, and it is true that fiscal stimulants in the United States have given the Trump administration a growth cushion (so to speak) when it comes to pushing the envelope, but there is some feeling in which subcutaneous China's economy constitutes the cutting of the nose to the face.

At the same time, the renewal of trade problems weigh heavily on stock markets that have now deleted most of their gains for the year. In particular, recent underperformance has pushed the relationship between the iShares MSCI Emerging Markets ETF (EEM) to the S&P ETF during the 2018 nadir (top spot).

Meanwhile, again it goes back to Italy – maybe you've heard. Matteo Salvini has ratcheted up his signature budget bombast in front of EU elections, and there is fierce speculation he can attempt to capitalize on the League's popularity by forcing the government's shakeup.

Bickering between the League and Five Star becomes completely unsustainable, and it is doubtful that Salvini will wait too long to make a point that the Italian economy should not subside and / or Italian assets undermine another level of ambiguity with what we saw in May last year. In the midst of the excitement, Italian shares are on their way to their first losing month of the year (bottom line of the visual over).

Here is some color from Goldman that gives you a certain perspective on Italy in the context of the latest risky mood (this is from a note out Tuesday):

To assess how the deteriorating macro image affected performance, we benchmarked premium characteristics to the latest changes to our first three GS risk appetite factors: global growth, monetary policy, and dollars. We have found that premium performances since the beginning of the month have been in line with their implied returns, except for the banking sector that has underperformed substantially. 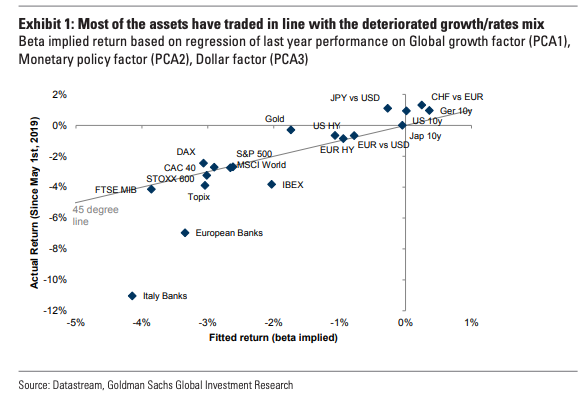 Note that the FTSE MIB (ie, Italian stocks at all) has actually performed inline with their implied beta, meaning that things can be much worse for Italian stocks if decent earnings are no longer sufficient to compensate for concerns about The banking sector, where exposure to the state power actually goes near historical heights.

To be clear, monetary policy makers are on high alert and will do what they can. The RBA minutes and a speech by Philip Lowe on Tuesday telegraphed a supplement and the market still expects Fed relief. Significant ECB and BoJ normalization are out of the question for the foreseeable future.

If the central banks' accommodation will be enough this time, can be discussed.

If it didn't come through all of the above, my current opinion is that there's not much to like about the setup right now.

Take it for what it's worth.

Enlightenment: I / We have no posts in any of the aforementioned shares and no plans to start any positions within the next 72 hours. I wrote this article myself, and it expresses my own opinions. I do not receive compensation for it (other than from Seeking Alpha). I have no business relationship with a company whose stock is mentioned in this article.