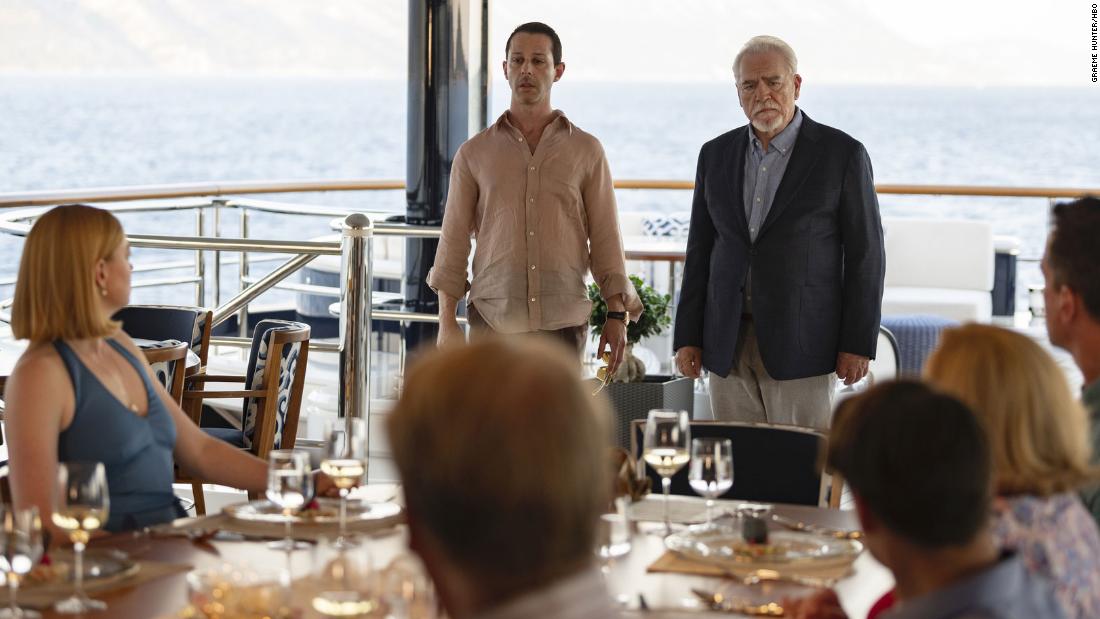 The cast and creators of the award-winning series, which will compete for several statues at Monday’s Emmy Awards, insist the characters are inspired by a wide variety of family-run dynastic businesses – both past and present. Showrunner Jesse Armstrong said in a backstage interview that the writers drew from “famous media families like the Hearsts, to today’s Redstone, John Malone, Robert Fitz of Comcast, Murdoch and Robert and Rebekah Mercer, who founded Breitbart.”

The premise of the series, which airs on HBO, which, like CNN, is owned by Warner Bros. Discovery, is practically ripped from Murdoch’s playbook.

Logan Roy, a ruthless deal maker and a friend of presidents, certainly has a Murdoch vibe.

Rupert Murdoch grew the small newspaper company he inherited from his father in 1952 into one of the most powerful conservative media empires in history. News Corp, with a market cap of $13.50 billion, is one of the most influential companies on the planet.

He always intended to pass the company on to one of his children, but the 91-year-old has never named a successor.

Like Roy, the three-times-married Murdoch has several children from two marriages.

Prudence Macleod is Rupert’s eldest child from his first marriage. Prudence never showed much interest in running the family business, so she has largely stayed out of the succession battle that ensnares her siblings.

Rupert Murdoch’s eldest son from his second marriage is Lachlan Murdoch, who rose rapidly through the ranks to become chairman and chief executive of News Ltd in 1997.

At the time, his father described Lachlan as his heir, “the first among equals.” Then, in 2005, he quit abruptly after a battle with Fox News Channel CEO Roger Ailes over the direction of the cable news network — effectively derailing his successor. Lachlan returned to the family business in 2014.

The family also includes Rupert Murdoch’s youngest son, James Murdoch, who dropped out of Harvard in 1995 to start his own hip-hop record label.

James Murdoch joined News Corporation and was increasingly seen as the new heir apparent after Lachlan Murdoch quit in 2005. But he resigned in 2011 after being engulfed in a phone-hacking scandal. After a hiatus of several years, he rejoined the family business before finally stepping down in 2020, citing “disagreements over certain editorial content published by the company’s news channels and certain other strategic decisions.”

Elisabeth Murdoch is the only daughter of her father’s second marriage.

Rupert Murdoch has been dismissive of her bid to take the throne, saying she needed to find out how many children she wanted to have before planning further advancement in the company, Sky High writer Mathew Horsman said in the series.

In 2000, she left the family business and founded one of the UK’s largest independent production companies.

On “Suksession”, Logan Roy has four children. Elder Connor Roy (Alan Ruck) is largely removed from the business and, in the final season, set his sights on the presidency. Kendall Roy (Jeremy Strong) initially sits as the heir apparent to his father, but after a series of blows, he falls from his father’s grace.

The Roy family’s youngest, fast Roman Roy (Kieran Culkin), has had a hard time proving himself worthy of the top spot. Sarah Snook’s Siobhan (or Shiv), meanwhile, has the skills and her father’s favor (even when they disagree) but has been met with resistance.

The media empire and the network

“Successions” Waystar Royco and Murdoch’s News Corp. have more than a few points of overlap.

Throughout the series, Logan Roy talks to the president and his advisers about the network’s coverage of the White House and bends their access.

“Rupert had always fantasized about having a close relationship with an American president,” says Mahler.

In Season 2 of “Suksession,” news leaks that Waystar’s cruise ship department buried internal reports of sexual harassment, assault and possibly murder. The scandal forced Logan Roy and his son Kendall Roy to testify before a US Senate subcommittee – another strike in Kendall’s quest for power.

The debacle shares similarities with News Corp.’s 2011 hacking scandal. The company’s British newspaper, the News of the World, came under scrutiny when it was discovered that journalists hacked the phones of royalty, celebrities and crime victims to get their stories. Mirroring the show, Rupert Murdoch, along with his son James, testified before Parliament’s Culture, Media and Sport Committee.

In the fallout, James relinquished his title as executive chairman of News Corp’s UK publishing unit.

“You can imagine, in a situation like this, a father’s instinct might be to protect his son, but James is really being thrown under the bus by his father,” Mahler said. “It’s a humiliating and devastating period for him.”

Selling away the empire

Both Rupert and Logan pulled off a move that stunned people: Selling their self-made empires.

In the season 3 finale, Logan announces his plan to sell Waystar Royco to streaming company GoJo and give tech entrepreneur Lukas Matsson control of the company.

“This is the best moment to sell. If I don’t make the best deal at any given time, what’s the point? I’m not getting out, I’m leaving $5 billion on the table,” Logan told his children. “Make your own pile. This is an opportunity for you kids to get a real life education.”

Rupert also opted to cash out in 2018, selling off most of 21st Century Fox to Disney.

“When the Disney deal closed, Fox was left a shell of its former self. Gone was the movie studio, gone were cable networks like FX. What remained was the Fox Broadcasting Company, Fox Sports and Fox News — the thing that Rupert cares about more than anything else,” says Matthew Belloni, former editor-in-chief of The Hollywood Reporter and founder of Puck News, of the Murdoch series.

Rudenberg says this move was seen as a vote of no confidence in his children.

“By making his family the business, and the business his family, Rupert left his family as broken as his company was when he sold to Disney,” Rutenberg said. “It was torn apart by this decades-long battle for inheritance, which was also a zero-sum battle for the father’s love.”

Today, Lachlan Murdoch is the CEO of Fox Corp and his father serves as co-chairman. Both James and Elisabeth have left the family business.

The future of Logan’s children is very uncertain as the series enters its fourth season.

Premiere date has not been announced.

“The Murdochs: Empire of Influence,” a CNN Original series produced in partnership with The New York Times, explores the legacy of media mogul Rupert Murdoch and the intense succession battle between his children. It premieres Sunday, September 25 at 9:00 PM ET.