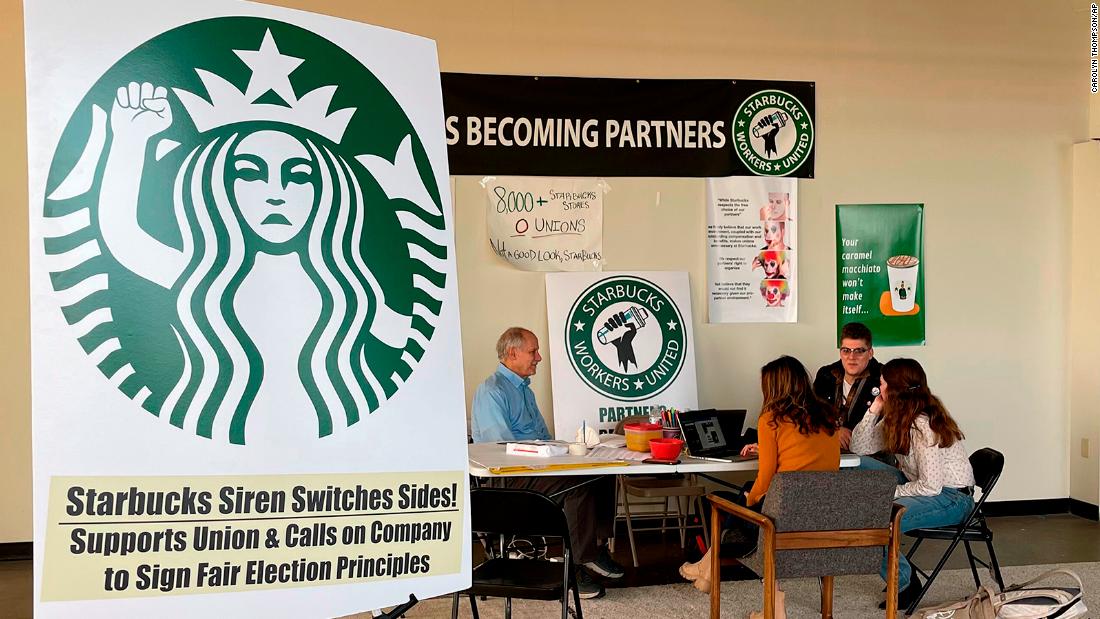 The union vote in a store in Buffalo, New York, won by a margin of 19-8. The vote in another store resulted in a count of 12 to 8 in favor of the union, but each store’s count is considered separately, so workers in the other place will not have union representation while in the first they will. The votes of a third Buffalo store are still being counted.

The work of organizing Starbucks employees had been closely followed nationally. The company made a great effort to convince employees that they were better off without a union, but at least when it came to one of the stores, it failed in that effort.
Starbucks has 235,000 employees in almost 9,000 US stores. No one has so far been a member of a union. Employees, many in their teens and 20s, have worked to organize a union, called Starbucks Workers United, an independent affiliate of the Service Employees International Union.

In addition to seeking better pay, union supporters argue that organizing the workforce is the only way to get their voices heard about the way their stores are run, and to win better pay for longtime colleagues, who often earn little more than new hires.

Starbucks says it offers many benefits that others in the industry do not, including health care for part-time workers and reimbursement of school fees. Starbucks has implemented two pay raises in the last 18 months. The coffee chain says the average salary is more than $ 12 an hour, and more than half of American employees earn more than $ 15 an hour. The company says it has the best storage rate in the industry.

Although the Buffalo poll only represents 100 employees across the three stores, Starbucks takes its organizational work very seriously, flooding western New York City with top executives, including former chairman and CEO Howard Schultz. The company is concerned that the organizational work may awaken elsewhere. Employees at a Starbucks in Mesa, Arizona, as well as at three other locations in Buffalo, have also applied to begin the process of holding a poll there.
In a recent submission to the Securities and Exchange Commission, in a section where Starbucks lists risks for the company, the chain said that “if a significant portion of our employees were to be unionized, our labor costs could increase and our business could be negatively affected. requirements and expectations that can increase our costs, change the employee culture, reduce flexibility and disrupt our business. “

But Starbucks is also concerned about how their efforts to defeat the union could damage its reputation. “Our responses to any union work can have a negative impact on how our brand is perceived and have negative effects on our business, including on our financial performance,” Starbucks warned in the same message.

Union supporters at Buffalo Starbucks have complained about the mandatory meetings employees have attended with top executives, claiming it is a form of threat. The company said it was simply trying to present its argument that the best way to improve working conditions is not to have a union acting between employees, which Starbucks refers to as “partners” and management.

“Starbucks” is constantly listening to enhance their partner experience and treats each other with respect and dignity. And while we will never be perfect, together we will create our best path forward, “CEO Kevin Johnson said in a statement to employees this week.

Starbucks has argued that the vote should be held among workers at all 20 Buffalo stores, not just the three that the union is trying to organize. The company said it was because workers often move between stores, but the union said the argument was an attempt to dilute the vote in the stores where they have the strongest support for the union.

The Norwegian Labor Inspection Authority, which is conducting the election, has decided that voting will only take place in the three shops.