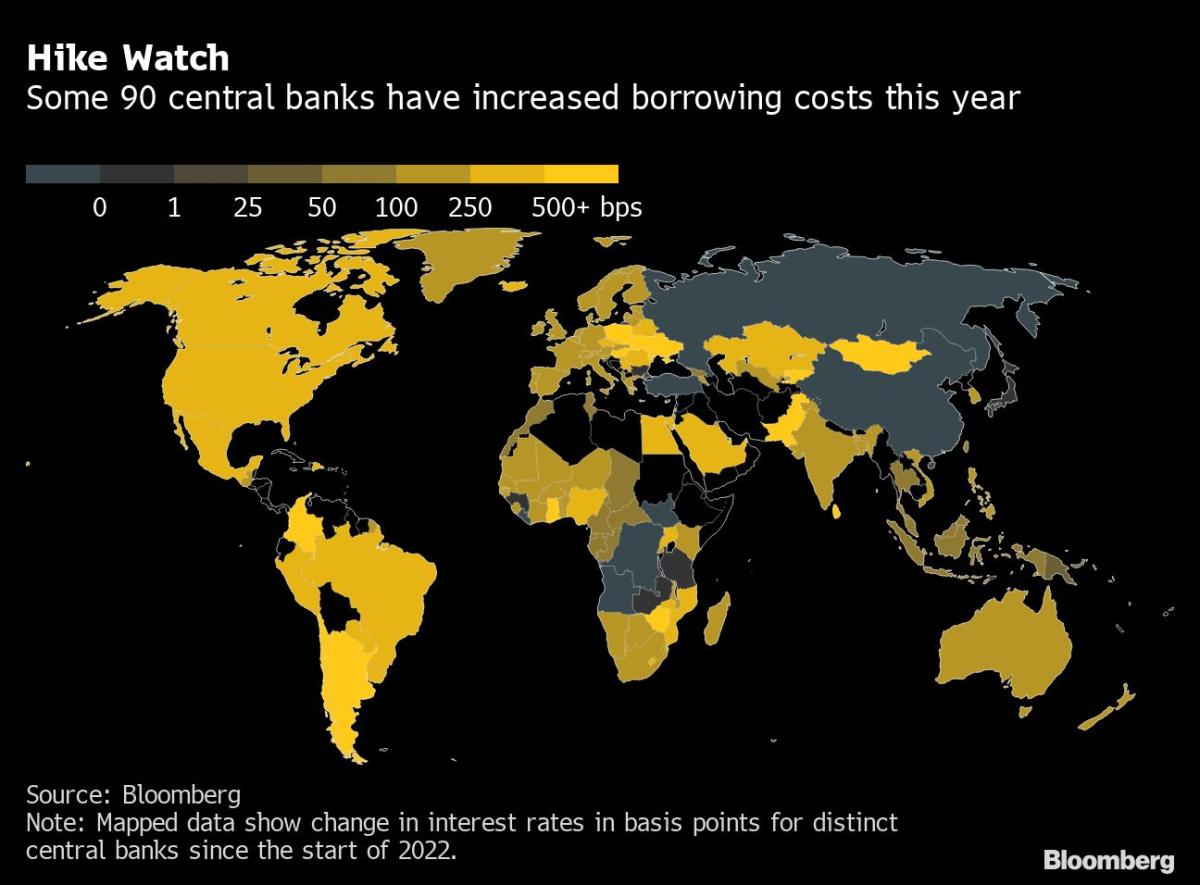 Global finance chiefs are gathering in Washington in the coming days with the warning of a possible loss of $4 trillion in world economic output ringing in their ears.

It is the Germany-sized gap in growth prospects through 2026 that International Monetary Fund chief Kristalina Georgieva identified last week as a looming risk.

She will play host as central bankers, finance ministers and others confront the fallout on the global economy with rampant inflation, aggressive monetary tightening, rising debt and the biggest ground war in Europe since World War II.

That the IMF and World Bank annual meetings will be fully in-person for the first time since the outbreak of Covid-1[ads1]9 in early 2020, and show progress in bringing the pandemic to an end, will be of limited comfort given other headaches.

The current confluence of economic, climate and security crises makes it unlike anything global policymakers have seen since 1945. Yet certain elements, such as the devastation in emerging markets caused by Federal Reserve rate hikes in the early 1980s, resonate with the present. predicament

“The big question for the meetings is, ‘What are we going to do in terms of the institutional response to this, beyond business as usual,'” Masood Ahmed, president of the Washington-based Center for Global Development, said last week.

Here’s a quick look at some issues officials will struggle with:

Elsewhere this week, a faster US core inflation reading, UK financial stability news, a South Korean rate hike and the Nobel Prize in economics will be among the highlights.

“As foreign finance ministers and central bankers gather in Washington for the World Bank-IMF meetings this coming week, many may argue that the rest of the world cannot afford further Fed hikes.”

Click here for what happened last week, and below is an overview of what’s coming up elsewhere in the global economy.

In the US, the consumer price index is the high point for the coming week. The Labor Department’s report on Thursday will give Fed officials a snapshot of how inflationary pressures are developing after a series of huge rate hikes.

Economists estimate that the CPI rose 8.1% in September from a year ago, marking a slowdown from last month’s annual increase of 8.3% as energy prices fell back. But excluding fuel and food, the so-called core CPI is still accelerating – it is expected to show an annual increase of 6.5%, up from 6.3% in August.

An increase of that magnitude in the core measure would match the biggest advance since 1982, illustrating stubborn inflation and keeping the pump primed for a fourth court-trial 75 basis point rate hike at the Fed’s November meeting.

Investors will hear from a number of US central bankers in the coming week, including Deputy Chair Lael Brainard and regional Fed presidents Loretta Mester, Charles Evans and James Bullard. Minutes from the Fed’s September meeting will be published on Wednesday.

Other data include figures on prices paid to US producers. So-called wholesale inflation has shown signs of moderating as commodity prices weaken amid concerns about a global economic slowdown.

The week will be limited by retail sales data. Economists forecast a modest monthly advance in September, helped by a rise in motor vehicle purchases. Excluding cars, the value of retail sales is seen declining for a second month. Because the figures are not adjusted for inflation, the data suggest that demand for goods slowed in the third quarter.

Bank of Korea Governor Rhee Chang-yong may resort to a mini U-turn on the scale of rate hikes. While he returned to the usual quarter-point increase in August, many economists see him opting for a move twice that size on Wednesday as the Fed’s rapid tightening puts pressure on gains.

The Monetary Authority of Singapore is set to tighten for a fifth consecutive meeting, while the State Bank of Pakistan is expected to hold its benchmark interest rate steady for a third.

Assistant Governor Luci Ellis can shed light on the Reserve Bank of Australia’s latest thinking on policy after its pivot to smaller hikes.

Bank of Japan Governor Haruhiko Kuroda and Finance Minister Shunichi Suzuki will be in Washington for the IMF meetings, with the yen’s movements still under close scrutiny.

Meanwhile, China is being hit by a surge in Covid-19 cases following the week-long National Day, just as the country’s top leaders gather in Beijing for a meeting with President Xi Jinping.

The week starts with the announcement of the Nobel Prize in Economics on Monday. The award was established by Sveriges Riksbank in 1968, adding a sixth category to the existing awards for physics, chemistry, medicine, peace and literature. Three US-based academics won in 2021 for work with experiments based on real situations to revolutionize empirical research.

The Bank of England’s fiscal policy committee will take center stage on Wednesday, a sure sign that Britain is facing significant problems.

The panel, responsible for emergency intervention to prevent a bond market spiral last month, will release a summary of its latest meeting. It could provide insight into whether officials see a risk of renewed turmoil that already plagued pension funds after Britain’s mini-budget. It can also address the implications of a sharp rise in mortgage rates.

BOE Governor Andrew Bailey is among several officials scheduled to speak in the coming week, many of whom will appear at or around the IMF meetings.

Likewise, several other officials from across Europe will speak in Washington or nearby. European Central Bank President Christine Lagarde and Thomas Jordan, her counterpart at the Swiss National Bank, will both make remarks.

When it comes to European data, the UK will provide the most important news. Jobs and growth reports can paint a richer picture of how the UK economy is doing amid skyrocketing prices and high inflation.

Industrial production in the Eurozone on Wednesday is likely to have picked up partially in August after a much larger decline last month.

Inflation data will be prominent in the rest of the region. In Hungary on Tuesday, the pace of price growth may reach 20%, while on Thursday Sweden’s key target is expected to exceed 9%. Israel and Egypt will also release inflation reports.

Further south, Ghana’s target for price growth is expected to be more than triple the ceiling of the central bank’s 10% target for a third consecutive month.

The week is underway with the Brazilian central bank’s closely watched weekly Focus survey of market expectations. Analysts have cut their 2022 inflation forecasts for 14 consecutive weeks to 5.74%, while the 2022 GDP forecast has been marked down during that time to 2.7%.

The increasingly optimistic view of Brazil’s consumer prices is likely to be confirmed by data released on Tuesday: analysts expect price increases to moderate for a third straight month in September, leaving the annual rate just above 7% – a full five percentage points below April’s peak of 12.13 %.

With inflation in Chile near a three-decade high, the central bank is all but certain to extend a record tightening cycle, which is likely to push the policy rate up 50 basis points to an all-time high of 11.25%. The bank meets next in December.

On Thursday, Mexico’s Banxico will publish the minutes of its September 29 meeting, where policymakers raised the key interest rate to a record high of 9.25%. Many analysts see another 125 to 175 basis points of tightening before officials determine their job is done.

To end the week, Argentina is expected on Friday to report year-on-year inflation in September, not far off the 83.45% posted by Turkey, the highest in the Group of 20. Analysts polled by Argentina’s central bank see a year-end of 100.3%.