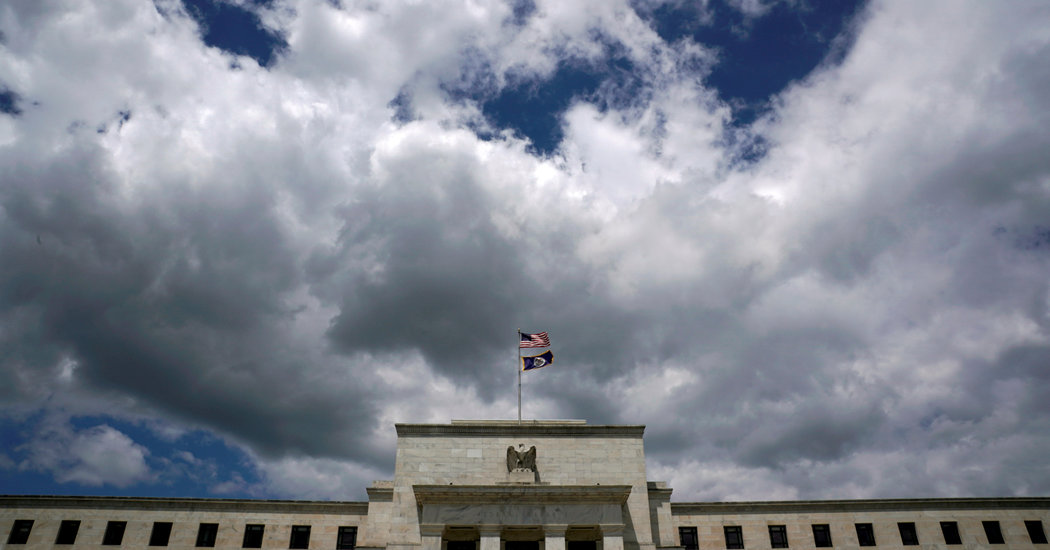 WASHINGTON – Federal regulators moved on Wednesday to facilitate oversight of the country's largest banks and other financial firms, continuing to push the Trump administration to reverse rules that were put in place after the 2008 financial crisis.

The Federal Reserve said. that it would adjust the structure of its annual "stress tests", which measures the ability to lead banks to resist a potential economic or financial storm. The changes are likely to make it easier for banks to obtain regulatory approval to pay higher dividends or buy their own shares.

A federal monitoring panel separately announced that no large, non-bank financial institutions – insurance companies, asset managers and the like – should no longer be designated as "systemically important". The classification gave such companies more intrusive regulatory regulation.

Overall, the announcements on Wednesday represented a major victory for the financial industry, which has argued since the Obama administration, as a result of the rules imposed after the financial crisis, was heavy and made it more difficult for banks to make loans and support economic growth. The bank's leaders also argue that because the industry is much more economically strong than it was ten years ago, many newer regulations are now unnecessary.

However, critics argued that playing the rules, with financial benefit to the bank shareholders and managers, will lead to a less secure, less transparent financial system that is more vulnerable to a repetition of the decade's devastating crisis.

"It is as if we all had to go to the gym and we all had to do the same, now they say half of you don't even have to go, and the other half who has to go can do something easier, says Christopher Wolfe, CEO of Fitch Ratings, who evaluates the creditworthiness of the big company. "It's just another data point that reinforces the notion that there has been regulatory relief."

The Trump administration has said that deregulation is a top priority, along with tax deductions and audits of trade agreements in its efforts to accelerate economic growth.

Shortly after taking office, President Trump managed the Treasury to make a series of reports with recommendations for regulatory changes, including the watering of the Dodd-Frank law from 2010 and the Volcker rule, which prevented banks from dealing with. own money

In recent months, Fed officials have signaled growing interest in reassessing and easing the regulatory burdens faced by large banks.

Jeremy H. Powell, Fed Chairman, said during his Senate Confirmation hearings that Wall Street Banks regulations were "tough enough" and suggested an appetite for streamlining after the crisis. Later last year, Rands K. Quarles, Fed's Deputy Supervisor, demanded a more tailor-made approach to regulating financial institutions and suggested that the Fed be able to settle the rules of security in its balance sheets.

Only four financial institutions, including the American International Group and MetLife, previously had the "too big to fail" designation. Everyone argued that the labels could be removed. Prudential Financial was the final company to escape from the tougher regulation, after the Supervisory Board concluded last year that it no longer represented a threat to financial stability.

In the future, the monitoring panel said that it would introduce a new system to identify activities and products that could pose major hazards. The Council said it would only designate a company as "systematically important" if there was no other way to mitigate the risk to the financial system by addressing its activities.

"Today's proposal will make significant improvements to how the Council identifies, assesses, and responds to potential dangers to US financial stability," said Steven Mnuchin, State Secretary, in a statement.

The major change is Fed's adjustments to how it performs stress tests of 11 of the largest banks that received state budgets in 2008.

The Fed said Wednesday that it would end its practice of granting "pass" or "fail" ratings to banks on some of the stress tests that measured the bank's ability to hold lending During a financial crisis or economic downturn, this so-called qualitative part of the test has also measured the strength of their risk management systems and anti-money laundering systems.

The stress tests will still have a pass / fail component in measuring whether they have enough capital to keep working properly during a simulated financial emergency.

Bank managers have been annoyed by the stress tests, and complain that the qualitative part is based in particular on regulators' subjective assessment.

Fed's planned changes are "an attempt to be sensitive to how time-consuming and resource-oriented these regulatory testing processes are," said Evan Stewart, a partner at the law firm Cohen & Gresser.

Stress tests have drawn a number of major banks. 2014 shot down Citigroup's plans to return money to shareholders after it failed the qualitative part, the following year, Deutsche Bank and the Spanish bank lost Santander, while Bank of America almost did not go out on the pass.

The pass / fail characters "reduce transparency and rob the audience of the ability to hold banks and regulators accountable," said Dennis Kelleher, president of Better Markets, a finance business watch group. "The markets will not have the whole picture."