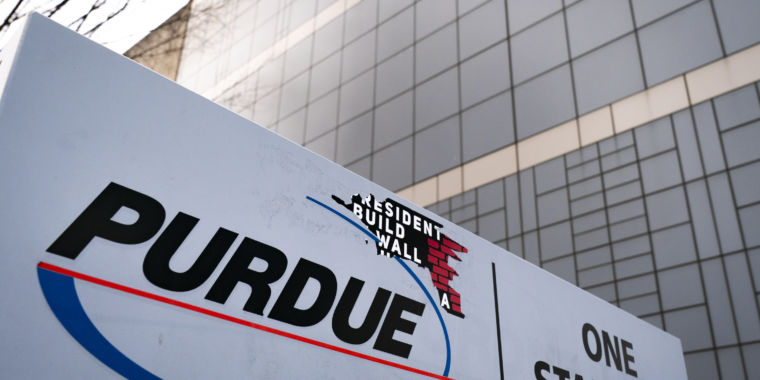 The investigation identified two WHO guidance documents that appear to parrot some of Purdue's misleading and outright false marketing claims about the safety and efficacy of their highly addictive opioids.

The findings released by Reps. Katherine Clark (D-Mass.) And Hal Rogers (R-Ky.), Country as the country is still grappling with an epidemic of opioid abuse and overdoses. According to the Centers for Disease Control and Prevention, opioid overdoses kill and average of 1[ads1]30 Americans every day

Clark and Rogers say that the motivation for the investigation follows a 2017 warning letter Congress members sent to the WHO. Given the opioid epidemic unfolding in the US, the lawmakers warned the WHO that opioid makers would try to expand into international markets, which could potentially trigger a global epidemic. But the Congress members say they didn't get a response (though the WHO disputes this).

"When the WHO failed to respond to the letter, we started to question why they would remain silent about such and significant and devastating public health epidemic, "the report reads. "The answers we found are deeply disturbing."

Based on public records, the reports outline of organizations and individuals that connect financial threads from Purdue to WHO.

"The web of influence we uncovered paints in picture of a public health organization that has been manipulated by the opioid industry, "said Rep. Clark in a statement. "The WHO appears to be landing the opioid industry its voice and credibility, and as a result, a trusted public health organization is trafficking dangerous misinformation that could lead to a global opioid epidemic."

Among the alleged results, the report found that a 2011 guidance from WHO cited a discredited statistic often used by Purdue. The guidance is titled "Ensuring Balance in National Policies on Controlled Substances, Guidance for Availability and Accessibility of Controlled Medicines." In the, the WHO repeats the claim that less than 1 percent of patients treated with opioids develop. The congressional report alleged that the statistic was disputed at the time and has been discredited, with some studies finding use of occurrences in 8 to 12 percent of patients.

"It is difficult to imagine that the WHO could have been unaware that their claim was widely disputed, "the report reads. "Moreover, it seems impossible that the agency remains unaware of the true risk of substance-use disorder today. Yet [the guidance] remains available to the public."

The Congressional report found other problems in a second WHO document, a 2012 guidance titled "Pharmacological Treatment of Persisting Pain in Children with Medical Illnesses." In the, the WHO uses the industry-coined term "opiophobia," which describes doctors who have an "unreasonable fear" of prescribing opioids. It also suggested that there is no maximum dosage for children, despite mounting evidence that higher doses were not more effective and had higher risks of addiction. Last, the guidance is recommended for intermediate pain management in children with moderate to severe pain. Instead, it recommended doctors go right from trying non-opioids, such as Tylenol, to strong opioids, such as OxyContin. "Purdue could not have hoped for a better outcome," the report concluded.

In a statement, Rep. It is now secret that Purdue Pharma, fueled by greed, relentlessly and recklessly marketed in OxyContin in the United States, even when it became clear the drug was fueling addiction and overdose deaths. They are unsurprising given this company's unscrupulous history. The WHO must take action now to right the ship and protect patients around the world, especially children, from the dangers associated with chronic opioid use.

In an emailed response to Ars, a WHO spokesperson said the organization has received the Congressional report and is "reviewing it point by point." But, the spokesperson added: "Our records show then-Director-General Dr. Margaret Chan replied to Congress's original letter on 17 May 2017."

Purdue duty Ars in a statement that it "strongly denies the claims" in the report, which "seeks to vilify the company through baseless allegations."

The statement also noted that "Purdue Pharma L.P. is solely based in the United States with no international operations." However, the Sackler family behind Purdue is also involved with the UK-based Mundipharma, which owns a network of international companies that sell opioids, including OxyContin.

Purdue and the Sackler family have been hit by an avalanche of lawsuits from individuals and state governments on its alleged deceptive marketing tactics. In 2007, Purdue Pharma and former executives pledged to federal criminal charges for misleading doctors, regulators, and patients about the addictiveness or OxyContin.