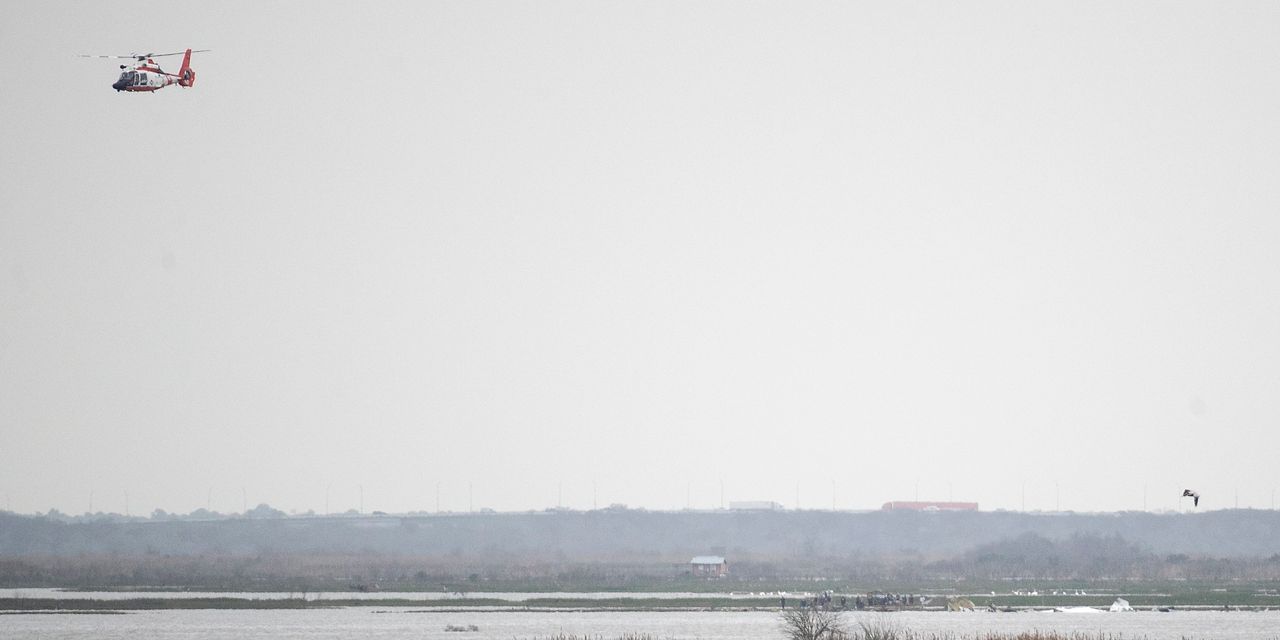 A plane flying cargo for

crashed in Texas on Saturday with three people on board, leaving a large debris field in a bay near Houston, authorities said.

was flying from Miami to Houston when it crashed into Trinity Bay near Anahuac, Texas, around 12:45 pm The FAA said the lost radar and radio contact with Atlas Air Flight 3591 about 30 miles southeast of Houston's George Bush Intercontinental Airport.

The largest intact section of the aircraft was about 50 feet long, Mr. Hawthorne said at a news conference. "It looks like total devastation," the sheriff said. "Knowing what I did not believe anybody could survive it."

The Federal Bureau of Investigation's Houston office, which is assisting with the probe, said human remains had been recovered and there were no signs of survivors. ] Witnesses reported the plane crashed nose first into a marshy area of ​​the bay, Sheriff Hawthorne said. He said recent fog in the area had lifted, but conditions at the crash site were tough as the water depth varied from 5 feet to zero, with deep mud.

National Transportation Safety Board Chairman Robert Sumwalt told reporters the plane was in a normal descent until around 6,300 feet. It then took what he described as a "very, very rapid" dive. The NTSB was sending a team of investigators to the crash site late Saturday.

As investigators and industry safety experts began analyzing the sparse initial clues late Saturday, some early issues emerged. There was no emergency transmission from the crew, suggesting a blaze was unlikely because smoke sensors would have given pilots advance warning of such a problem. A quick check of the jet's manifest indicates that it is carrying any identified hazardous goods in its cargo holds, according to one person familiar with the details. But several safety experts stressed that it was premature to draw any firm conclusions

Safety experts also said most types of engine problems were low on the list of potential culprits. A nearly instantaneous loss of thrust or failure of both engines – particularly at a relatively low altitude – is highly unlikely, according to these experts. Ice particles in the atmosphere, as well as internal ice buildup on engine parts, have temporarily shut down numerous engines on big jets at much higher altitudes.

The plane was proceeding on a normal descent, according to the person familiar with the details, when it changed direction under air-traffic guidance to avoid flying into a storm cell. The last radio transmissions from the cockpit confirmed a controller's radio message that the weather would clear up to the airport.

Atlas Air said in a statement the three people on the plane and their families "are our top priority at this time, "That it is fully cooperating with the FAA and NTSB.

Purchase, NY-based Atlas Air operates a fleet of 112 jets, including 20 Boeing 767 freighters flying on behalf of Amazon Air, known as Prime Air. It also owns aircraft for other customers, including DHL Express, China's SF Express and the U.S.

Air Transport Services Group Inc., another cargo operator, flew another 20 of the Boeing jets for Amazon, with more due to join later this year.

Amazon subcontracts flying between its U.S. fulfillment centers, as well as ground handling and maintenance services.

Dave Clark, Amazon's senior vice president of worldwide operations, offered the company's ideas and prayers to the crew's friends and families. "We appreciate the first responders who worked urgently to provide support," he added.

The e-commerce giant launched its air operation in 2015, building on the rapid growth of online purchases of goods that previously shipped by road or rail.

The last major crash of a cargo jet in the U.S. occurred in August 2013, when an Airbus A300 jet operated by

crashed short of the runway as approached the Birmingham, Ala., airport, killing the pilot and co-pilot.

—Laura Stevens and Andy Pasztor contributed to this article.

Write to Andrew Tangel at Andrew.Tangel@wsj.com, Doug Cameron at doug.cameron@wsj.com and Alison Pages at alison.sider@wsj.com